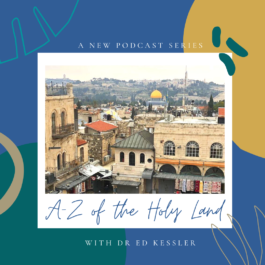 Nowhere is the subject of peace and understanding, or more realistically, violence and misunderstanding, more evident than in discussions about the Holy Land, whether in synagogues, churches, mosques, political debates, university seminars, or on marches and demonstrations. Those with skin in the game tend to pursue partisan agendas deploying caricature as a rhetorical tool, ignoring what is a complex web of communities, beliefs and traditions to focus on the destructive clash between Israel and Palestine.

Hosted by Dr Ed Kessler, our series explores the ancient and unending complexities of a strip of land along the Mediterranean. Which term do you apply to a land that became the birthplace of the Hebrew Bible?

Come on a journey from biblical times to the modern day, exploring the connection between religion, history and politics and reflect on one of the most intractable conflicts in the last 100 years.

Back to Podcast Series