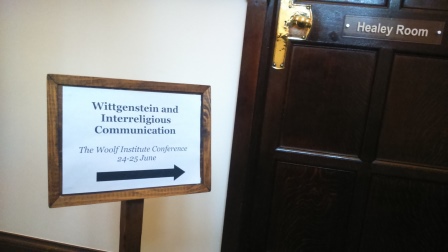 I find it somewhat awkward to reflect on a conference which I myself have organised, for several reasons. First, at times I found it hard to focus on the most interesting, i.e. academic, aspects of the conference while trying to ensure everything was running smoothly. (As I later realised, I was worrying too much!) And second, everything positive I would like to say about the conference might be misinterpreted as self-praise.

But there are a lot of nice things one can say about the Woolf Institute conference Wittgenstein and Interreligious Communication, held in Cambridge last month (24 and 25 June 2015), and none of that has to do with anything special that I might have done. So I am writing these after-conference reflections and impressions in the hope that they might inspire some Wittgensteinian souls out there to engage in interreligious studies, or vice versa: motivate some interfaith loving souls to read some (or more) Wittgenstein!

The conference brought together experts on Wittgenstein's thought and/or Interreligious communication, chiefly philosophers and comparative theologians, from ten countries: China, India, Portugal, Israel, Slovenia, Germany, Austria, UK, US, and Belgium. Most conferences on Wittgenstein, religion and theology have, in the past, – at least those 'in the West' which I have been made aware of – tended to focus mostly on Christianity, sometimes on Judaism, and rarely on pre-literal, tribal religions. At the Wittgenstein and Interreligious Communication conference, however, we decided, on the one hand, to broaden the usual scope by including several religious traditions (Christianity, Judaism, Islam, Buddhism, and Hinduism), as well as, on the other hand, to narrow down the focus by examining the relevance of Wittgenstein for the variety of phenomena we tend to call interreligious communication (or obstacles to it, the conditions of its possibility, its nature, the varieties of it, etc.). 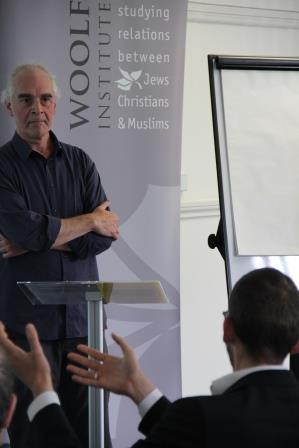 Several presentations at the conference engaged with recent and exciting developments in the studies of Wittgenstein's thought. Klaus von Stosch, Scott Steinkerchner, Guy Bennett-Hunter and Andreas Kapsner all took up interpretations of the remarks collected in Wittgenstein's On Certainty on the so-called 'hinge propositions' (these are taken-for-granted certainties in which doubting is normally inconceivable), and enquired whether either (some) religious beliefs or shared cultural commitments belong under this Wittgensteinian category – but each has related it to quite different questions in interreligious communication and comparative theology; Sajjad Rizvi, Varja Strajn and Priyambada Sarkar engaged with the mystical strand of Wittgenstein's (especially his early) thought and itsrecent interpretations, exploring the relevance of Wittgenstein's remarks about the 'unsayable' and the 'nonsensical' for understanding interreligious communication; Yuliya Fadeeva and myself re-addressed the question whether Wittgenstein's philosophy of language implies incommensurability between different religious discourses, and read it in conjunction with recent interpretive contributions in philosophy and theology, respectively; and Nuno Venturinha explored recent scholarship on development of Wittgenstein's thought (to which himself has importantly contributed) to the question of Wittgenstein's relevancy for elucidating interreligious communication.

Equally impressive was the sheer range of topics with which Wittgenstein's thought have been addressed at the conference. Please accept my apologies for another dense and far too brief summary: Randy Ramal related Wittgenstein's thoughts on the crucial role of 'primitive' or instinctive reactions in intercultural communication with the latest biological research on animal behaviour and communication, reminding us that 'communication' includes much more than discursive interaction; Paul Cortois offered a reading of Wittgenstein's reflections on the peculiar power that the names and images of the loved persons and places have for us, which sheds light, he claimed, on the ritualistic role and power of the particular names of religious founders, prophets, or holy places has for believers across different traditions; Nimrod Matan explicated the Wittgensteinian pedagogical idea of an 'impossible' (strictly speaking) or perfect teacher, and asked about the applicability of this idea in multi-religious educational communities; Rhiannon Grant argued that a Wittgensteinian perspective on depth-grammars of religious discourses and practices both enables and sets limits to the phenomenon of multiple religious belonging for an individual; Thomas Carroll and Mikel Burley extended, in different ways, Wittgensteinian philosophical approach to the concept 'religion' into conversations with sociological and ethnographic research on 'religion' and interreligious encounters; Mike Rose-Steel uncovered aspects of Wittgenstein's philosophy which bring philosophy closer to poetry than to science, and suggested that such perspective enables a platform for interreligious understanding; Daniel Weiss compared two quite different ways of using Wittgenstein in philosophical theology – one closer to the highly intellectual(ist) understanding of religion and the other closer to 'ordinary religious language' – and cautioned that the latter is equally important as a context for interreligious communication as the former; and Ankur Barua questioned whether the gaze of Wittgenstein's philosophy of religion is really descriptive, as Wittgenstein understood it to be, in respect to two different (Eastern) religious stances which happen to be in theological disagreement. 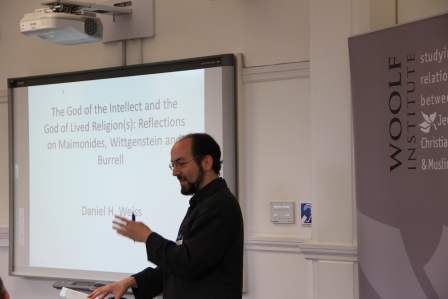 Daniel Weiss speaking at the conference

For any philosophically minded reader with even a mild interest in either Wittgenstein or interreligious communication, this will likely feel like a great feast of lectures and papers – which it was! Furthermore, in addition to the talks, some fascinating discussions happened too. I'm glad that, given the sometimes downright sectarian nature of the inner-Wittgensteinian discussions over how to interpret Wittgenstein, the ones that have developed at this conference were really friendly and constructive. This might have something to do with the fact that most conference participants have themselves been involved in various kinds of interreligious (or religious-secular) communication, where long-term disagreements about deeply-held beliefs are, of course, a part of the game one can always count on.

There was a strong sense at the conference that some very elucidating, fresh connections were made between aspects of Wittgenstein's thought and the current philosophical and comparative-theological developments in interreligious communication. It was also a joy to see that researchers who have worked on separate but similar topics and projects had an opportunity to discuss their work on these particular topics with one another, mostly for the first time. While these two fields of research – Wittgenstein scholarship and interreligious studies – have, of course, much more to contribute to each other than could be done at this conference, and while not all scholars who have worked on Wittgenstein and interreligious communication were able to attend, most of the participants expressed satisfaction with the academic progress of the conversations. This is really more than, as an organizer, I could have hoped for.

An edited volume will be published on the conference proceedings, and several follow-up events are planned for the 2015/2016 academic year. I will write more about these in due course.

This article is written by Dr Gorazd Andrejč who is Junior Research Fellow at the Woolf Institute. Gorazd is a philosopher and theologian who is currently working on two research projects. The first of which is Wittgenstein and Interfaith Disagreement which explores the potentials and the limitations of using Wittgenstein's philosophy for the purpose of understanding the variety of interreligious disagreements. It also critically examines various and often contrary ways in which Wittgenstein's work has been interpreted for this purpose by philosophers and comparative theologians.