Published May 17, 2017 by Stephanie Mitchell

What is religion? What is culture? Where do they intersect? Can they be disentangled? Just a few of the questions turned up by an unusual visit I made to an isolated destination in Central Asia three years ago this month.

In spring 2014 I went on a voyage I'd been dreaming about for much of my life, to Xinjiang in northwest China. Although little known in the West, Xinjiang (in full, the Xinjiang Uighur Autonomous Region) is the country's largest province, with a population of over 20 million spread over an area as large as France, Spain and Germany put together.

Xinjiang's vast spaces are divided between two enormous deserts, the Gobi and the Taklamakan, separated by thin corridors through which passed the Silk Route explorers and traders of my imagination over millennia. The province is surrounded and further split by the Tien Shan mountains and abuts Tibet to the south, as well as the  "stans" of Central Asia to the west.

The eponymous Uighurs are a Turkic-speaking people who make up about half of the province's present population. In particular, the oases of southernmost Xinjiang, the focus of my 2014 travels, are nearly exclusively Uighur. The towns – starting from Kashgar, at the westernmost edge of China, and going on through Hotan, Kiriya, Niya- are genuine oases. One may drive for hours and see no other human being until entering the next settlement, with golden sands to one side of the single highway and the way to the towering peaks of the Kunlun to the other. 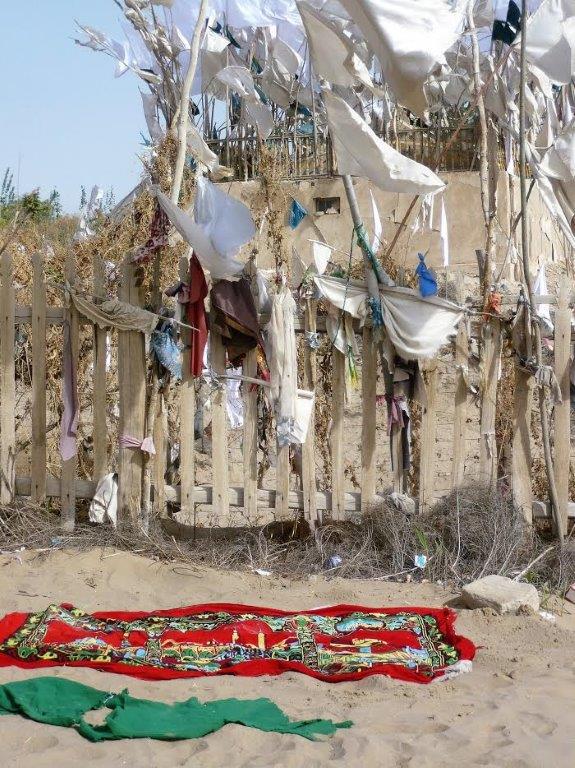 Over a thousand years ago, before the conversion of the population to Islam, many religions flourished in the areas from which the Uighurs came and where they are now settled, including Buddhism, Nestorian Christianity, Manichaeism and Zoroastrianism. Some of the most fascinating sites in the province are grottos full of Buddhist paintings and the area was renowned as a seat of learning where texts were translated from and into a multitude of languages of Central Asia and beyond.

Today, though, the native Uighur population of southern Xinjiang are almost exclusively Sunni Muslim, so it was not a complete surprise that the local guide, a young Uighur man born and raised in the province, would not enter those Buddhist caves with the three of us (a Christian, a Jew, and an atheist) whom he accompanied on a two-week tour of the region. Some of the caves became known in the West as a result of the actions of explorers who removed wall paintings and documents in actions later decried as vandalism, but which brought medieval treasures to the attention of international scholars. Now there are occasional sightings of graffiti in Arabic as evidently some residents are unhappy about the presence of the Buddhist figures nearby.

But it was not this intersection of Buddhism and Islam, the past and the present, which most intrigued me on that journey, rather, it was the nature and texture of the local performance of Islam.

Many historical sites there would look quite familiar to a visitor to other parts of the Muslim world: mosques, palaces or cemeteries feature ogee-shaped tombs of rulers or revered historical figures, sometimes draped in cloth coverings. People visit some of these places as tourists for an hour or a day, and it would be hard to judge whether they were there out of piety, historical interest, or sightseers.

Further out of the settlements, however, are some very different sacred sites, mazars (shrines) in the middle of what is now the desert. They may have a central location which is supposed to be a Sufi saint's tomb, but without the building and trappings of the more urban locations. There may be a semi-ruined mud brick structure in the middle of the mazar, and there may be some local religious presence, but much of the year they are little frequented. Historically, there have been pilgrimages to some of them which attracted great crowds of people, travelling traditional routes to spend some days in eating, praying and participating in ceremonies.

A few huddled figures, male or female, pray quietly, sitting on the sand in ones and twos, sometimes using the copies of the Qur'an tucked in wicker boxes attached to fencing that barely succeeds in keeping the sands off the ruins. Around the site are hundreds of sticks or branches planted singly and in bunches in the sands, bearing not fruit or flowers but banners and ribbons. Some of the fluttering flags are beautifully made, but most are of what looks like any fabric to hand: from cottons and silks in the pale blue favoured across Central Asia as symbolic of the heavens and vast open spaces to Gucci scarves, real or counterfeit. The mounds of sand and the clusters of sticks bearing fabric look far more like Mongolian shamanic or Buddhist sites than like anything I had expected from Islam.

Here are there are remains of charred meat and bones. And in amongst all this, an occasional dirty figure clothed only in tattered rags. 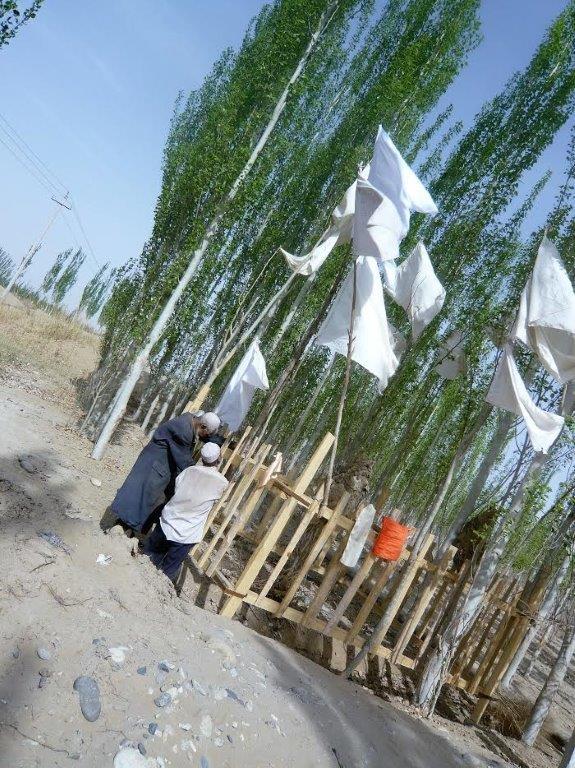 Our guide pointed out one such and explained he was a mendicant Sufi, surviving in this remote place only on charity. Where the guide had previously been quite eager to explain the religious and historical significance of the sites we visited, the mazar was obviously both dear to him and baffling.

"People make pilgrimages here, they have gatherings," he said, smiling – not a look he usually favoured.  "And the Sufi" – he used the word to describe any of the few beggars we saw –  "we are told this is wrong, this is not Islam".

"I have looked in the Qur'an, I cannot find anything here that says you should live like this. These people – you see their clothes, they have no belongings, they only eat what people give them – and yet their families seem to support them.

That is what I cannot understand. People appreciate them, their families help them to live like this, so there must be something good in it. But it is not Islam, as far as I can tell. We should not believe it. But" – he swept his arm out in a gesture to take in everything in the bleak but beautiful surroundings, the mendicant, the fluttering flags, the sky, the offerings –  "this is what we do". 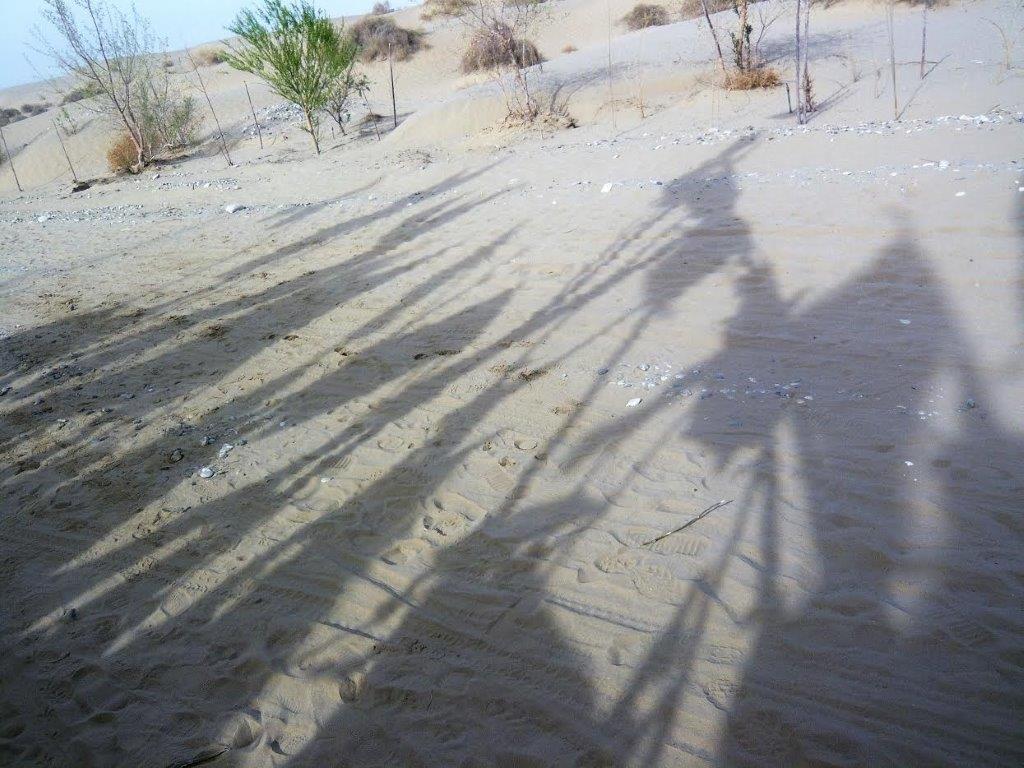 I took endless photos of the patterns of the sand, of the flags, and will never forget the unceasing sound of the fabric as it flapped in the endless desert winds. I do not know if what I saw and felt was Islam, shamanism, Buddhism, or any –ism.

But that is what they do, those people, in that place.

Stephanie Mitchell is a former student of the Woolf Institute course Jews, Christians and Muslims in Europe: Modern Challenges. She lives and works in Europe. This piece is written in her personal capacity and reflects no one's views except her own.

Much more detail of one such site may be found in Kashgar Revisited: Uyghur Studies in Memory of Ambassador Gunnar Jarring (2017, Brill, Leiden), notably the chapter, "Ordam Mazar, A Meeting Place for Different Practices and Belief Systems in Culturally Diverse Xinjiang" by Rahile Dawut.