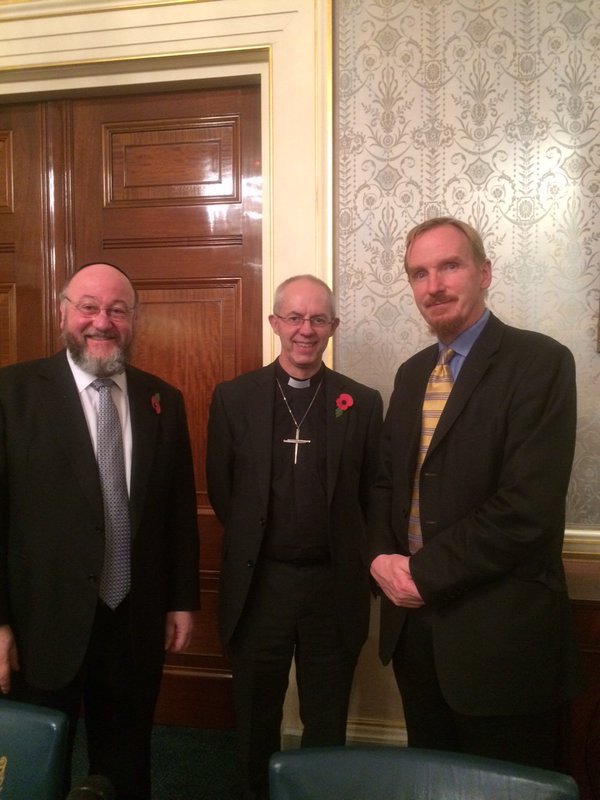 I was honoured and very grateful to be invited to share in part of the Woolf Institute's on-going series exploring the place of trust within contemporary society. On Monday 26 October, a crowd gathered in London to listen to a panel, chaired by Lord Ian Blair, exploring trust in religious leadership. We heard first from the Archbishop of Canterbury, Justin Welby, then from the Chief Rabbi, Ephraim Mirvis, and finally but by no means least from Shaykh Abdal Hakim Murad, Dean of the Cambridge Muslim College. This was an impressive range of speakers to hear from, and they did not disappoint!

What struck me most was the integrity from which each of them spoke, and personal integrity must surely be one of the key building blocks for trust. They did not pretend that all was well or easy within the religious communities within which they had leading parts to play.

Justin Welby reflected movingly upon the impact that the child abuse scandals had had in eroding trust in the Church of England. But he was also able to speak of ways in which trust was being rebuilt as apology and real sharing with survivors unfolded. He spoke of the ways in which, in seeking to faithfully follow his own calling, he knew the power of the model Jesus set before him, as before all Christians. It is a model of joining together the outward and the inward, the external actions and the inner motivations, such that people can come to believe that we are truly who we claim to be. The world knows too much of charlatans; of those whose motives are mixed and hidden. Good religious leadership that builds trust equips and enables those around to discover their own gifts and callings. It is catalytic.

The Chief Rabbi took us through a series of scriptures that built a picture of true religious leadership. He recognised the importance of vision and the significance of leadership that was transparent in what it was seeking to achieve. He spoke of the power of a life dedicated to God and to seeking to know and do the will of God. He recognised ways in which leadership can offer a clear and often simple idea, such as the reaffirmation of the importance of the Sabbath in the UK, that kindles a passionate and creative response from a whole range of people across many communities.

Abdal Hakim took us on a slightly different sort of journey as he opened up for us something of the nature and reality of leadership within the Muslim community and of its diversity across the world. He shared something of his own experiences in playing a part in such communities and also of feeling some of the pressures and tensions that come as Muslims seek to share in contemporary culture and find voice in the public square.

In the questions and answers that followed these presentations, we delved into a range of issues. There was discussion of the role of the media in reporting on religious topics and personalities. We were invited to ponder the role of women in religious communities. We looked at what sustains religious leaders. We explored the pressures religious communities face today, and thus what leadership is demanded. And these conversations then flowed on over a meal many of us shared together.

I came away with a strong sense of the thoughtfulness of these three leaders. They recognised that they had roles that placed them into positions of influence and power, and they were alive to the possibilities and pitfalls of such location. They were not blind to the mistakes and calamities of religious leadership within their own traditions. But they could also point to ways in which religious leaders have and are bringing truth and goodness to light. That the Woolf Institute is able to bring together such an event speaks of its own influence and of its mission to engage with and contribute to some of the important conversations we are having. Here was a chance to acknowledge that the world's religions have been entrusted with much. Much is rightly expected of their leaders. Much is given by these leaders.

This article is written by Reverend Neil Thorogood who is Principal of Westminster College, Cambridge. Trust in Religious Leadership was the third in a series of panel discussions organised by the Woolf Institute as a part of the academic project "Trust and the Development of Character in Contemporary Europe". Footage of the panel discussion(s) is available on the Woolf Institute's YouTube channel here.