Dr Jan-Jonathan Bock examines paradoxes of the Italian state, which treats certain African migrants as if they were inexistent, delegating responsibility for their wellbeing to volunteer groups.

What has happened to the  refugee or migration 'crisis' that dominated public discourses in Europe until recently? One year ago, I was living in Berlin, researching how the state and emergent civil society actors responded to the arrival of up to 10,000 refugees in Germany daily. The figures - and resulting challenges for integration, schools, housing, cultural difference - were widely debated. In early 2016, however, the Balkan route was closed: Macedonia and Hungary erected new fences, leaving refugees stranded in Greece. The much-criticised EU-Turkey deal subsequently eased the pressure on Greece, too, but also led to the rediscovery of another, much more perilous, way to Europe: the Mediterranean Sea.

On 3 October 2016, over the course of just twenty-four hours, Italian coastguard vessels rescued 6,000 migrants, travelling in unsafe boats. Libya, torn apart by conflict, has once again become the point of departure for refugees, migrants, and asylum seekers - finding the correct terminology is difficult and politically charged - on their way to Europe. This puts the Italian state into an awkward position: according to European law - the Dublin Regulation - Italy ought to register asylum seekers and offer due protection, as the first EU member state they enter. Most of the migrants and refugees, however, have got relatives or friends in other EU countries: they have got no desire to stay in Italy. Instead, they leave Lampedusa or Sicily as soon as they can and travel along the peninsula to reach the borders with France, Switzerland, or Austria. This used to work just as well for the authorities. Struggling with high youth unemployment and public debt, the Italian state saw no need to stop migrants from leaving: many were not fingerprinted and could not be identified when submitting applications for protection elsewhere. In recent months, however, under pressure from other EU countries, Italy has set up new registration hotspots, where a large majority of newcomers are recorded properly. Even this more rigorous procedure, however, has not stopped migrants and asylum seekers from crossing nation-state frontiers in search of work and a better life. In response, France has ordered tougher and more frequent border checks near the town of Ventimiglia; Austria and Switzerland have followed suit. The Italian, Austrian, and French governments have accused of each other of lacking solidarity and breaking EU rules. Figures are hard to estimate, but contacts in the Italian government told me that over fifty percent of those who arrive by boat in southern Italy continue their journey northwards. 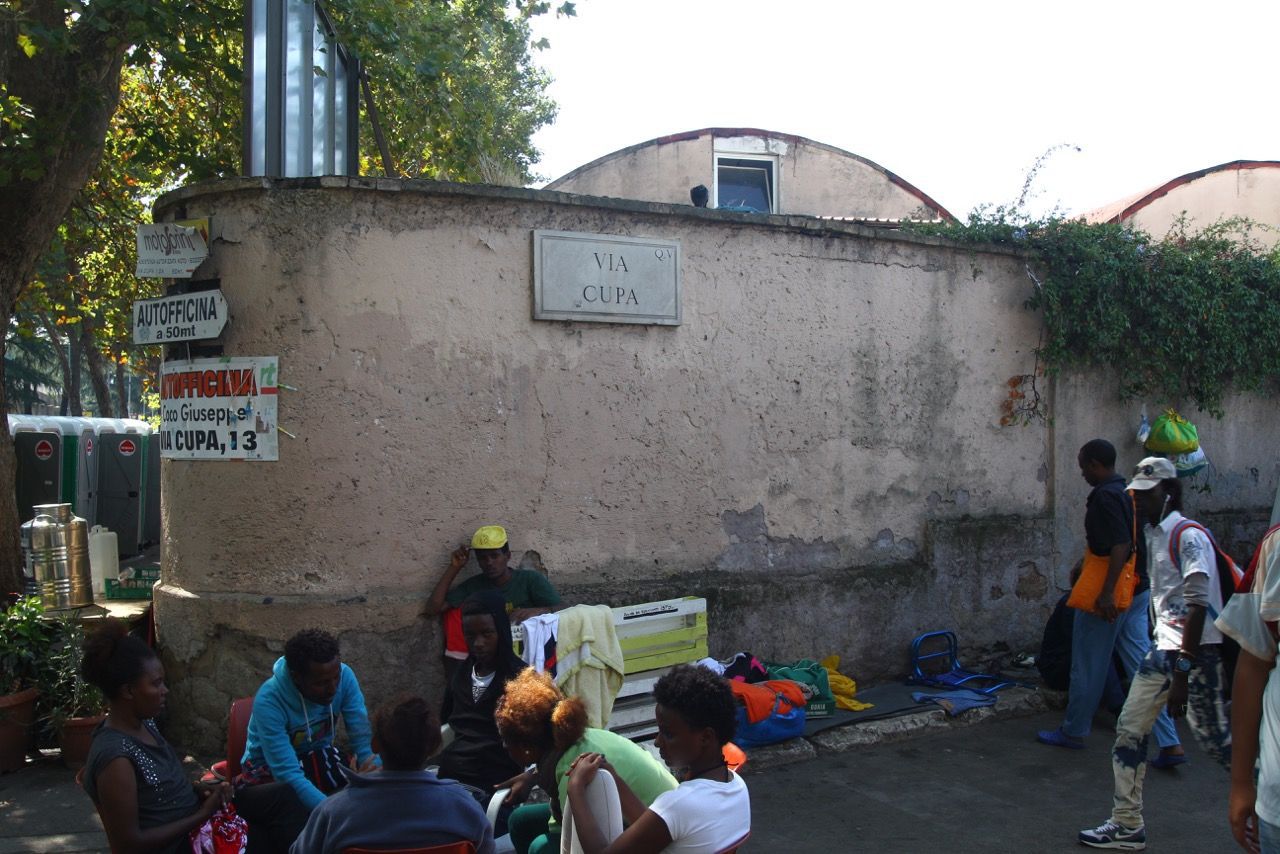 Entrance to the Via Cupa

Since January 2016, tens of thousands of these transitanti - the Italian term for migrants in transition - have come through Rome's Via Cupa, a narrow alleyway not far from the Tiburtina train station, in one of the less well-to-do areas of the Italian capital. An army of volunteers has been running this major support site for migrants and asylum seekers, without official help. Admittedly, the city of Rome has been beset by political turmoil in recent years: the mayor, Ignazio Marino, elected with a large majority in 2013, was forced out of office by his own party. A commissioner replaced Marino temporarily and ordered new elections. In June 2016, the inexperienced but enthusiastic anti-establishment Five Star Movement won by a landslide. The first months in power, however, have been troublesome for Rome's new mayor, Virginia Raggi, and her city council majority: the newcomers have been under attack by the media, political forces, and the economic establishment, particularly also over the decision to discontinue Rome's candidacy for the 2024 Olympic Games. Over the past years, those with political power have thus paid scant attention to migrants and their short-term stays in Rome, leaving this task to a voluntary group called Baobab Experience. 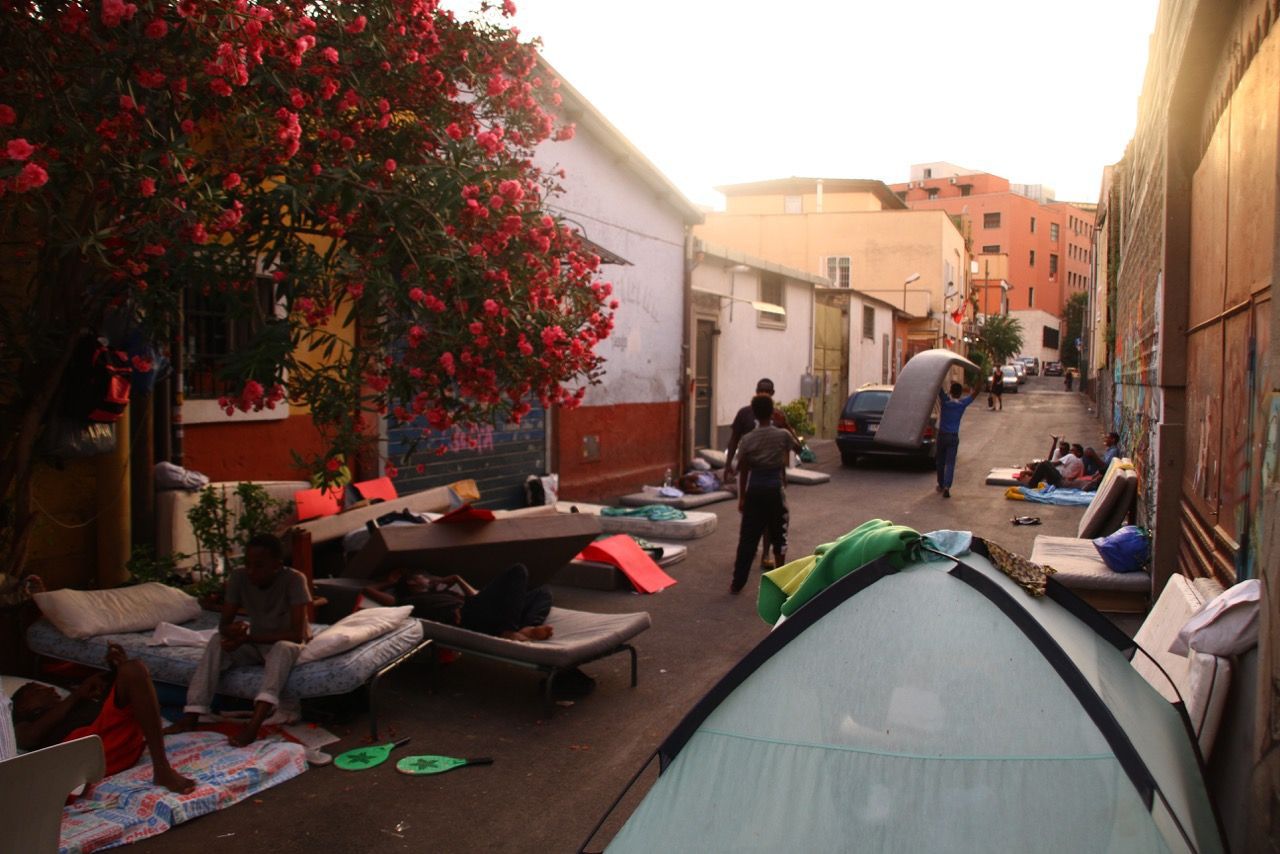 In the 2016 summer months, as many as four hundred refugees and migrants, predominantly from Eritrea and Somalia and on their way north, slept through hot nights on mattresses and in small tents in Via Cupa. They usually stayed for a few days, before continuing their journeys towards Milan, Turin, or Venice. Baobab Experience volunteers - predominantly Romans from across the city - organised daily meals, medical assistance, new clothes, and even legal advice. Many Romans donated food and clothing generously. Beyond this essential support, however, volunteers wanted to do more. 'These guys are our guests (ospiti) and we want them to have a good time in Rome, show them the city's sights, or play football together', Andrea, one of the coordinators, told me. In July, Andrea took dozens of young men to nearby bars to follow matches from the Euro 2016 football tournament. I looked around when he used the term 'guests', and saw dozens of young black men sitting on plastic chairs chatting to each other, writing on their smartphones, or gazing into the distance across the six-lane Via Tiburtina, one of Rome's main arteries, at one end of Via Cupa. Arriving at the nearby train station from southern Italy, dozens of new people came to Via Cupa every day, having been told by friends about this safe spot for the night, protected by Italian-speaking, supportive activists. 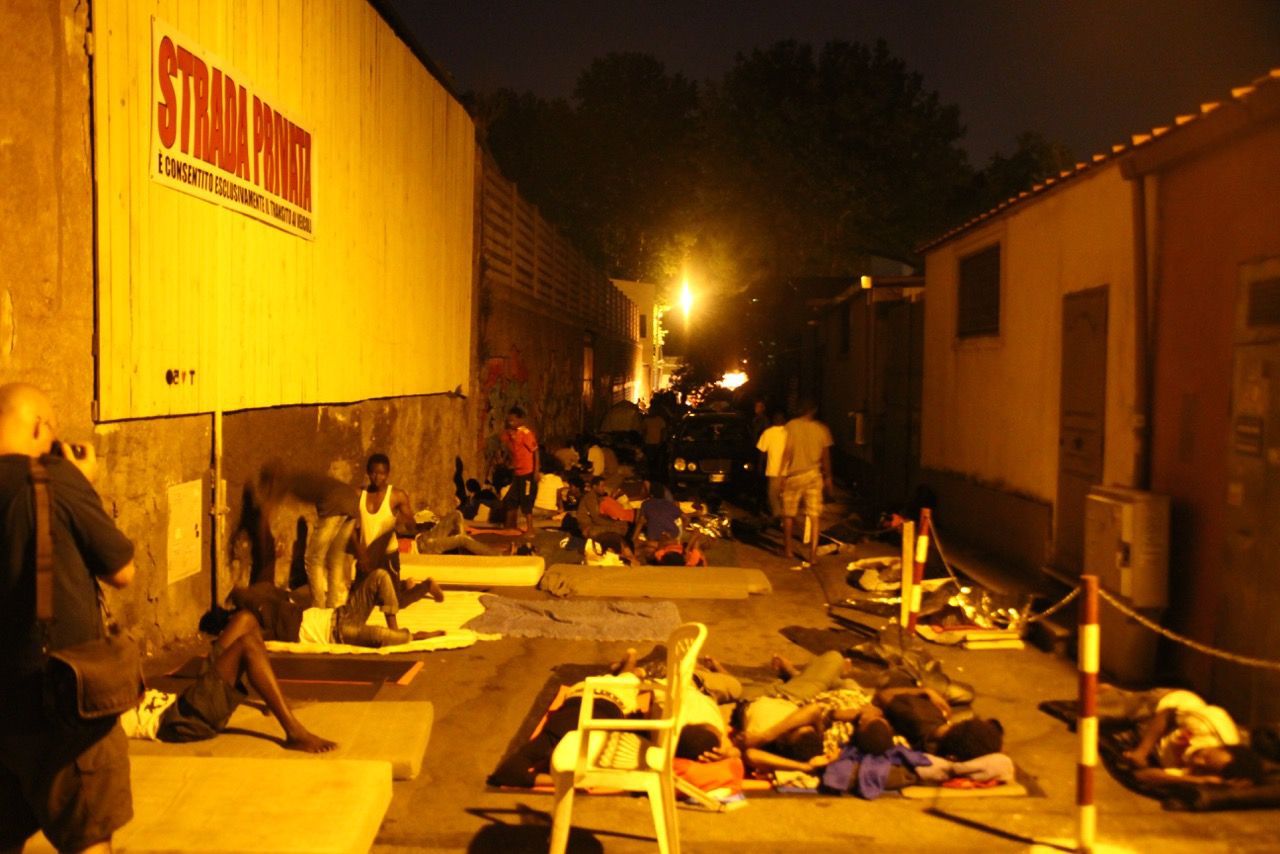 Via Cupa at night

The state did not interfere with the makeshift arrangement, which looked shocking to observers: hundreds sleeping rough on what used to be an ordinary, small street. From an unstable gazebo, volunteers handed out food and clothes, while migrants drew water from one of the hundreds of roman public fountains. The police watched over the entrance to Via Cupa and informed volunteers that they would tolerate the provisional open-air camp, but had orders to clear any tents or mattresses from outside the alleyway. The state was present, but only insofar as it prevented its lack of organisation and capacity from becoming too visible to passers-by.

A female Baobab Experience supporter explained in frustration: 'This is the typical Italian approach: if it's more or less invisible to the outside, it's fine, brushed under the carpet. They let us do our thing as long as we don't bring the black guys out of this hidden alley, but they don't offer any serious support'. When I spoke to the police officers, who leaned on their car, parked opposite the portable toilets that served hundreds, they confirmed the volunteer's scepticism: 'we're only told to make sure the tents and mattresses stay in that street, but we don't know anything else.' For months, the volunteers - increasingly worn out and tired - sought contact with changing city administrations, demanding a durable solution for the cold season. A sturdy camp, managed by the authorities, was promised, but not realised by the time of writing (mid-October). As the nights got colder in September and rain soaked mattresses on the bare tarmac, volunteers carried provisional beds into the gutted large building that once gave the name to the support group: the Baobab Community Centre. 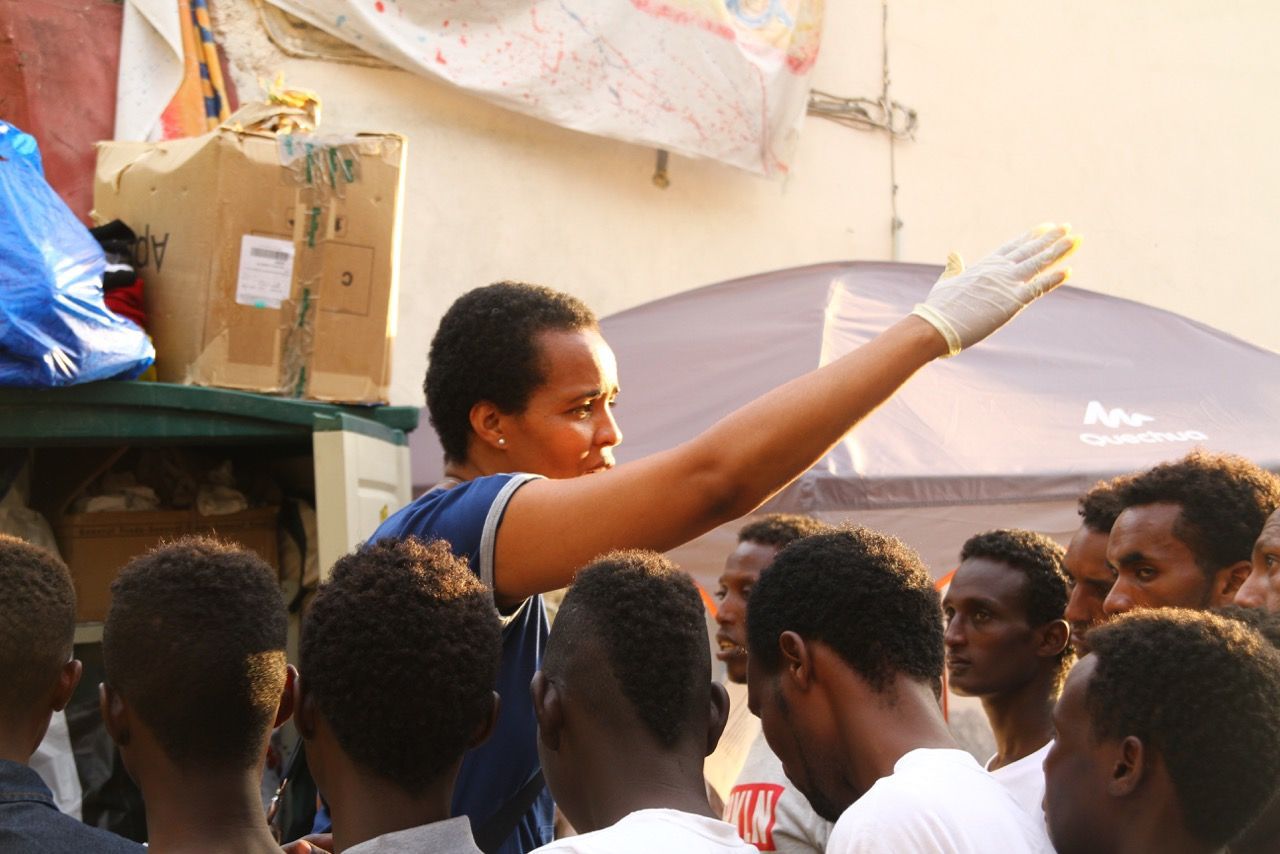 A volunteer distributes clothes at the Via Cupa

Until December 2015, this had been a vibrant place for intercultural activities and migrant support. Then, however, the city administration refused to extend the contract and the building was closed. The Baobab Community Centre became Baobab Experience: activists transferred their voluntary engagement onto the street in front of the large, empty structure, Via Cupa. In September 2016, returning to the abandoned building, which had been stripped of lights and flooring, carried a legal risk, since it could amount to occupation. The activists sought assurance from the police, who once more turned a blind eye as long as the volunteers managed everything autonomously and remained invisible. 'Occhio non vede, cuore non duole', Andrea said - if the eye doesn't see, the heart won't ache.

Many, however, did see what was happening in Via Cupa - particularly the street's residents. From one building at the corner of Via Cupa and Via Tiburtina, a large banner was flying as I visited in mid-September: 'Via Cupa = Anarchy. Local residents abandoned. Disgrace!!' Volunteers told me stories of angry reactions to, and even attacks on, their 'guests' sleeping on the floor. It seemed that everybody was hoping for more state support, probably even for the same cause - ending the makeshift camp - but tensions were growing nonetheless. On 30 September, the police arrived suddenly, rounded up the migrants and asylum seekers for registration, forced activists and volunteers to leave the street, and cleared tents, mattresses, and food donations. The camp was finished. The volunteers were furious. 'And what's the point?', Andrea shouted at a district councillor who came to see the results of the clearance for himself. 'Now you have hundreds of people sleeping all over Rome, without food, without portable toilets, without any protection. You are creating a safety risk for them, rather than solving one. We were here for these guys.' Many residents, however, applauded the heavy-handed response, at the same time as the activists' trust in the state's capacity to deliver justice and fairness declined further.

As I write these lines, it remains unclear how the situation will develop, particularly with the coming winter months. Temporarily, the parish of the San Lorenzo basilica, not far from Tiburtina station, opened its gardens to offer sixty migrants a safe space to spend the night. Food and medical advice were being offered there, too. The city administration still promises to find a permanent alternative. Baobab Experience volunteers remain sceptical, however, disappointed by what they consider an untrustworthy state that has thus far oscillated between neglect and authoritarianism, leaving central challenges of Europe's so-called migration crisis to the responsibility of motivated, but increasingly exhausted, civil society actors.