Towards a Tolerant and Pluralist Society?

MPhil student Madeleine Ary reflects on the conference, "1656, Cromwell and the Readmission of Jews: Towards a Tolerant and Pluralist Society?"

As an American, the British civil war is something about which I knew little, that is, until I attended the day-long conference sponsored by the Woolf Institute and Sidney Sussex College. The conference, entitled "1656, Cromwell and the readmission of the Jews: Towards a Tolerant and Pluralist Society", not only helped me understand the moment of Cromwell’s significant, almost single-handed success in readmitting the Jews to England after four hundred years of exile, but it raised an essential question in my mind: is toleration enough? 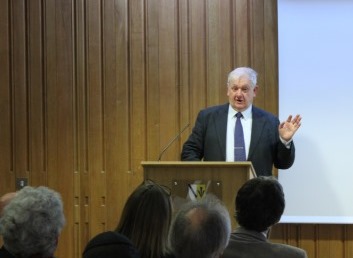 The day's lectures were kicked off by Professor John Morrill's analysis of the readmission of the Jews, and were threaded together in the pursuit of understanding what the introduction of interfaith toleration meant historically, and what it means for us now. As Professor Morrill pointed out, readmission is actually something of a misnomer; Jews had, in fact, been in England all along. What it really meant was that the Jews living in England could live their faith openly. The implications of this change became clear in the later lectures, the first of which, by Professor John Coffey, illuminated Cromwell's religious landscape as a Calvinist millennialist, allowing us to see some of his theological motivation. Protestant millennialism, with is emphasis on "Judeo-centric eschatology", was tolerant of Judaism, but with its missionary overtones, failed to be anything more than that.

Toleration does not equate to understanding, as Professor David Feldman explained in the next lecture. Rather it is "the history of restraint in the face of aversion". Professor Feldman demonstrated this by laying out the long and complex history of toleration in England after the Civil War. Eventually, he concluded, the idea of pluralism arose by necessity to replace mere toleration in order to accommodate the unprecedented levels of religious diversity in the UK since the 1970s. 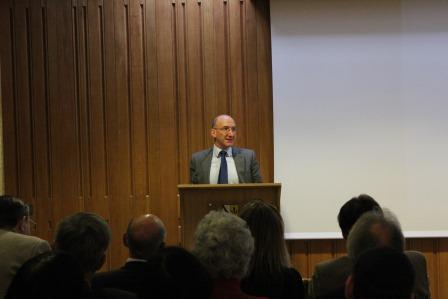 Having traced the history of toleration forward, we jumped back to the ages prior to and contemporaneous with Cromwell. Professor Miri Rubin set the stage in which Cromwell's re-admittance eventually took place with a swift and thorough overview of the daily experience of many British Jews. The scene is often peaceful, though marred with accusations of blood libel and sporadic anti-Semitic violence. Unfortunately, peace was not to be had for some contemporaneous Portuguese Jews about whom Professor David Abulafia spoke. One island off the coast of Africa, sometimes called Crocodile Island for its abundance of the deadly creatures, became a point of exile for groups of Jewish children, most of whom died horribly shortly after arriving.

With these examples of the dire consequences of intolerance in mind, we took a break for tea and soon returned for the final and most well attended portion of the day—a round table, "Religious and tolerant?, yesterday and today" chaired by Professor David Feldman, with Dr Rowan Williams, Rabbi Joseph Dweck, Dr Ed Kessler, and Professor Eugenio Biagini participating. The historical analyses of that morning and afternoon had brought us to the brink of the present, 2016, when moral questions on how society should regard minority faiths still abound. Each of the participants took a few minutes to answer the question of how religion and tolerance are compatible, and, ultimately, whether toleration is a framework within which we should continue to work at all. In answer to the second half of this question, Dr Williams said no; "tolerate", a verb which takes a direct object, requires that person x does something to person y. It leaves in place an unchallenged sense of who is making the rules. Rather, Dr Williams suggested we embrace argumentative pluralism, or the idea that everyone has the right to make the "same kind of noise". To this Dr Kessler added that England now is significantly different than it has been in the past. With less Christianity, more religious diversity, and increasing numbers of people claiming adherence to no faith, the modern religious landscape is nothing like the one Cromwell inhabited. Everyone, he continued, needs to feel that they are a part of the national story. This is the goal of pluralism. Rabbi Dweck and Professor Biagini expounded further on the idea of toleration and its limited role in a modern society.

The Question and Answer period was dominated by the idea of toleration and pluralism in our modern world. I emerged from the discussion with the sense that toleration was simply a step along a path to a healthy society. Though necessary and foundational, it cannot be the end goal. Pluralism, or argumentative pluralism, might be a solution, or it might not. Either way, in a culture increasingly diverse and divided, mere toleration is no longer enough.

This article is written by Madeleine Ary who is undertaking the MPhil in Asian and Middle Eastern Studies (Middle Eastern and Islamic Studies). For further details of the degree programme, visit here.

The conference commemorated the 360th anniversary of Oliver Cromwell's readmission of Jews to Britain and Ireland in 1656. Further details of the conference and other Woolf Institute events can be found at http://www.woolf.cam.ac.uk/whats-on/events.