The Seeds of Interfaith 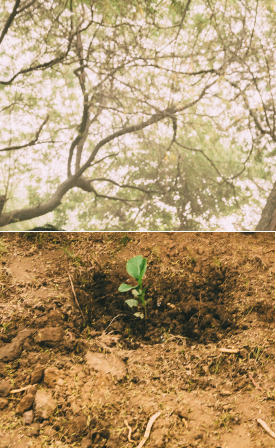 I was recently invited to attend the Times of India 'Green Drive', an initiative that over the course of two days aimed to plant 30,000 saplings in parks around the capital. This was the latest of several award-winning efforts undertaken by the Times of India since the 'Let Delhi Breathe' campaign began in October 2014. And it was timely. As volunteers gathered in their thousands to plant trees, clean public parks and 'make Delhi green', the whole city was inauspiciously enveloped by a thick smog that had descended for a week or so around Diwali. While many locals blamed the fireworks, the accolade of being named one of the world's worst polluted cities (according to the WHO) cannot be attributed to festivities alone.

I arrived at Tughlakabad Biodiversity Park on the outskirts of Delhi at 9am on what turned out to be a refreshingly cool morning. Some volunteers had already begun planting trees while others scoured the area for rubbish. A cultural performance had just ended and the stage was being set up for the next event. I must have looked as lost as I felt, as I was quickly guided towards the VIP tent (a must at any Indian public event) and welcomed with a cup of chai. Before I had a chance to get my bearings, Narayani and Sonal from the Times of India took me on a quick-stop tour, introducing me to the representatives of participating institutions. As it turned out, most of them were religious leaders. (This was not serendipitous; my invitation had resulted from a meeting with the Times of India where we discussed interfaith in India).

Among the many religious institutions and 'spiritual organisations' represented were the Brahma Kumaris, the Shri Ram Chandra Mission and the Art of Living Foundation. Muslims were represented both by members of Maulana Wahiduddin Khan’s Centre for Peace and Spirituality and the Chief Imam of India, Dr. Imam Umer Ahmed Ilyasi. While there were many I had never met, there were also some familiar faces from previous visits to Delhi, such as Jain Acharya Dr. Lokesh Muni and Jewish representative Ezekiel Malekar. The biggest contributor to the drive, in terms of sheer numbers at least, was undoubtedly the Sant Nirankari Charitable Foundation, bringing with them busloads of volunteers and banners on which were written their founder's slogan, 'Let's plant seeds of goodness in our society'. 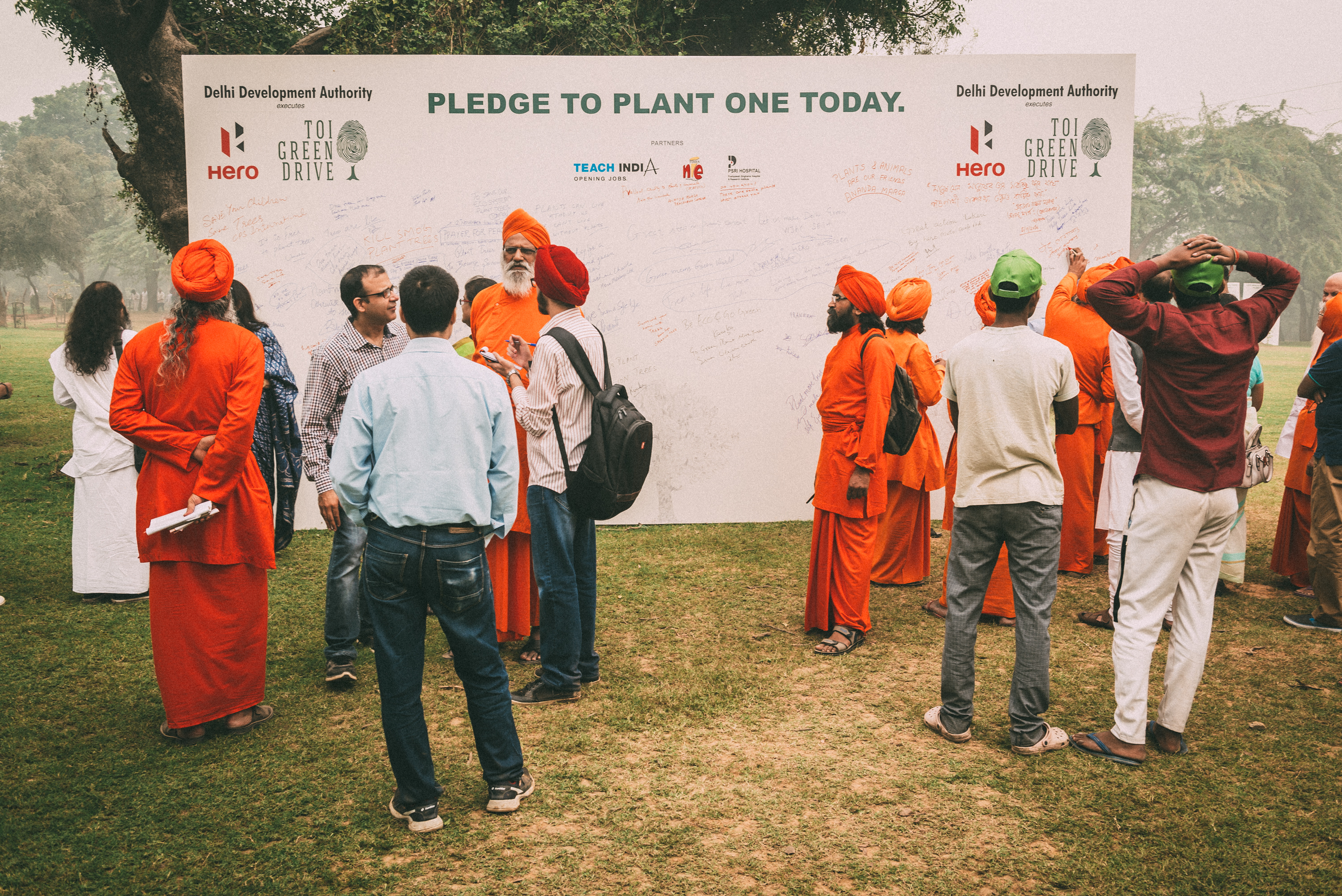 It's not immediately obvious why so many religious leaders from so many different traditions would gather for an environmental initiative like the Times of India Green Drive. A clue to their participation, however, lies in their respective theologies. Take for example, the Hindu concept of seva (often translated as 'service'). Seva comes in many forms and can include proselytising in some traditions, although in recent years it has come predominantly to connote social service or activism. Under the umbrella term seva, Hindu spiritual organisations feed disadvantaged children in schools across India (through 'midday meals' schemes); they set up world record breaking blood donation camps, build hospitals and are often the first to respond to natural disasters and humanitarian crises. Although outside of India Hinduism is often portrayed in ritualistic terms, as comprising of pujas and pandits, seva, or social activism, is a constitutive element of what it means to be a Hindu today.

And we find a similar concept in Islam. One of the five pillars of Islam, zakat, carries similar connotations to seva. Although often taken to refer to a religious monetary obligation to the poor (2.5% of one's savings above a given minimum), zakat today more generally refers to all forms of charity, which includes social service. The Delhi-based Zakat Foundation of India, for example, runs orphanages and hospitals and Muslim representatives are consistently on the frontlines of India's interfaith efforts. The Qur'an goes to great lengths to instil the importance of zakat. Indeed, it might be said that the Prophet's mission was more than anything one of social justice. This of course could also be said of other traditions; Sikhs and Sufis also pride themselves on their efforts to feed the poor and the Bible is replete with examples of Jesus' solidarity with those less fortunate; "Blessed are you who are poor, for yours is the kingdom of God" (Luke 6.21). Although Christians represent a small minority in India (under 2.5% of the population), their contribution to health, education and social justice in the subcontinent has been hugely disproportionate.

What was maybe most interesting about the Green Drive itself was that while it undoubtedly had the feel of an interfaith event, there was absolutely no mention of religion. No mention of interfaith. Although the success of the event seemed to pivot on the participation of religious leaders and the followers they brought, the event was publicised (and reported) in purely environmental terms. Combatting Delhi's pollution crisis is a common cause, and one that cuts across boundaries of caste, class and religion. It seemed to need little theological justification. And while in the secular West it might be naïve to simply assume that religious leaders can be taken as representatives of their respective communities, in India, alongside politicians, cricket players and Bollywood stars, religious leaders are a mainstay of public life (as I learned in April when I attended a political event in Harayana that hosted dozens of India's most prominent Hindu gurus). Since the early years of Nehruvian secularism religious leaders in India have become quite accustomed to sharing a pluralistic stage (literally). And in that sense, the interfaith aesthetic precedes the interfaith movement. 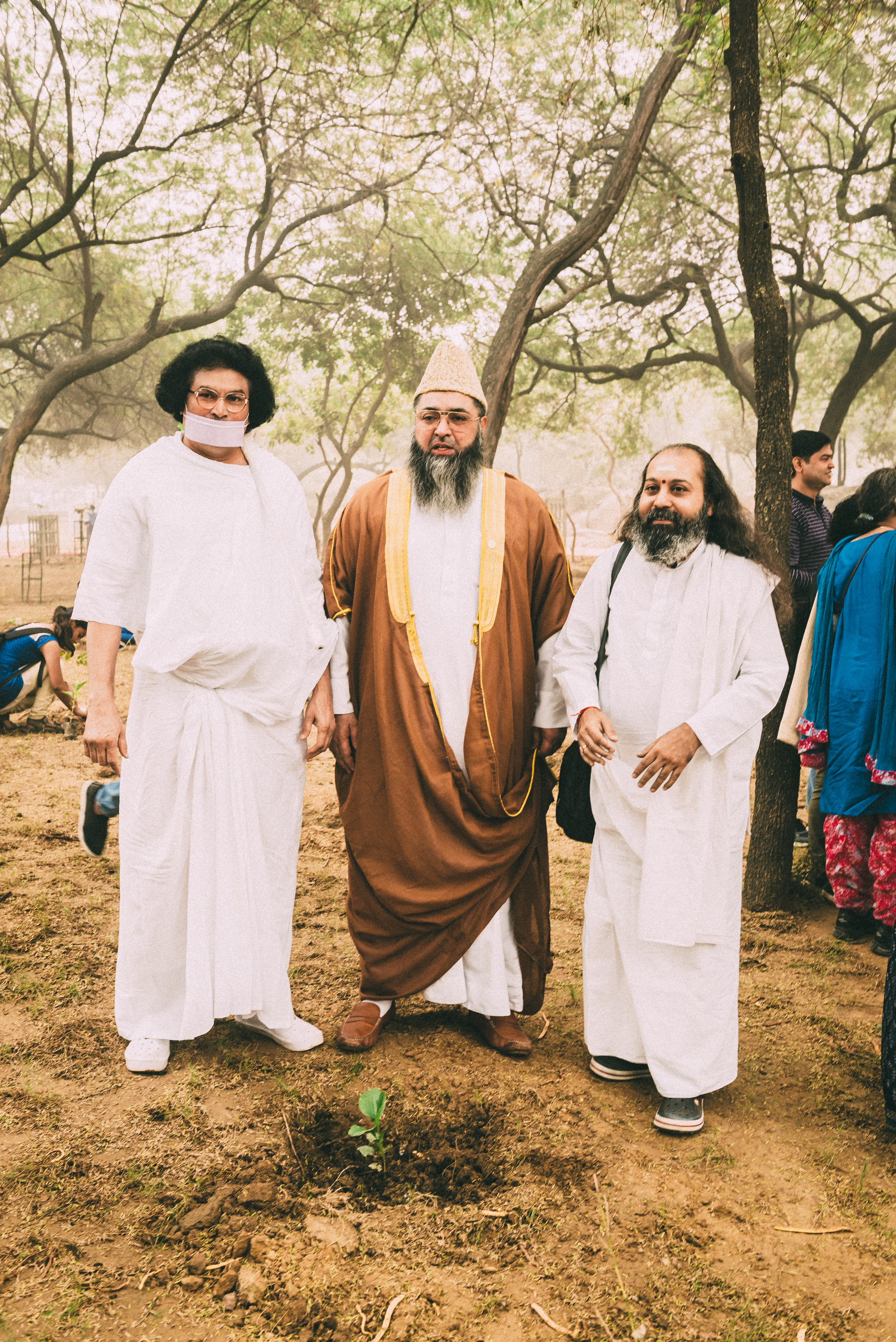 The Green Drive, although not an interfaith event (in the intentional sense), represented a departure of sorts from the more typical interfaith initiatives in India, which for the most part revolve around dialogue. Interfaith dialogue in India, as in the West, could be described as a search for sameness; representatives of various religious traditions gather to discuss themes such as coexistence, tolerance and mutual respect. Conversations cohere around slokas (verses from Hindu texts), Qur'anic surahs and Biblical passages, for example, with the goal of highlighting the various traditions' shared values. This of course serves an important purpose and as a result there is today a well-established network of interfaith institutions and practitioners across the country. Beyond the immediate confines of dialogue settings, however, it is not clear what impact interfaith dialogue has in the world.

While on one hand interfaith has gained momentum in India and is presented as the solution to communal tension, religious conflict and the spread of fundamentalism, on the other, it has been met with much cynicism. Some understand interfaith dialogue in particular to be elitist, and more damningly, ineffective. Ironically, many of the most prominent practitioners of interfaith in India are themselves its harshest critics. In my conversations with religious leaders and scholars alike in Delhi, there is a common theme; we need to replace words with action.  We need to spend less time talking about our shared values, and more time acting on them. This narrative can also be found in the UK, for example, where the more traditional model of leader-led interfaith dialogue is being supplemented, or at times replaced, by grassroots social action. And while it remains to be seen what direction interfaith will take in India, it seems that beyond simply identifying shared values across religious traditions, the seeds of interfaith are to be found in working together towards their practical realisation. Planting trees may be as good a starting point as any.

For more information on the Assessing the Effectiveness of Interfaith Initiatives (AEIFI) Project, please see here.