A report on the 5th annual Woolf Institute/Doha International Center for Interfaith Dialogue lecture, delivered by Hassan Al Thawadi, Secretary General of the Supreme Committee for Delivery & Legacy for the 2022 FIFA World Cup in Qatar.

I have a team that I support – for better or (usually) worse, 'til death do us part and all that –, but I'm also a fan of football. Weekends: I watch football. Podcasts I listen to: football. Politics and the weather aside, I have one 'small talk' subject: football. I can (and do when tempted) discuss at length the virtues of the old and new offside rules, the pros and cons of introducing more technology into refereeing decisions, Messi vs Ronaldo (Messi every time); basically anything football-related. 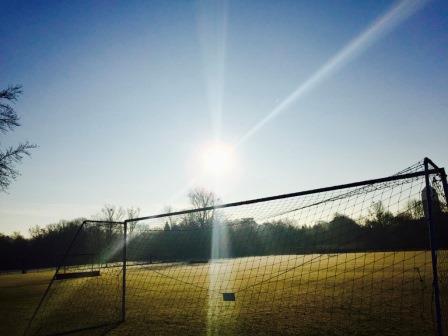 I'm confessing this because my love for the beautiful game and associated consumption of football media significantly informed my opinions as I waited to hear the 5th annual Woolf Institute/Doha International Center for Interfaith Dialogue (DICID) lecture at St Edmund's College, Cambridge. We had the honour to host Hassan Al Thawadi, Secretary General of the Supreme Committee for Delivery & Legacy of Qatar 2022, speaking about "The Middle East's first World Cup - a rebirth for La Convivencia through the power of sport?"

Like many football fans, I struggle with the scandals which strangle the game. As has been well documented, some within football have done a great job of burying its reputation at the bottom of a sweaty jersey bag. From the unforgiveable corruption of Blatter and co. at Fifa, to the destruction of the homes of the poorest to build stadia without legacy plans – most recently in South Africa and Brazil –, and the purported propagation of a deliberate hooligan culture in preparation for Russia 2018; football can be difficult to defend. Although it used to be that the positive legacies of World Cups ultimately outweighed the negatives (even if the latter were neither acceptable or excusable); this has proved less true of the last two World Cups, and the next one is raising serious concerns.

Granting tournaments to countries that can't afford them and not supporting sustainable legacy developments is deeply irresponsible and has been one of Fifa's most destructive and far-reaching crimes (which within their litany is saying something). I thought that awarding 2022 to Qatar was another own goal, and that subsequent negative news about workers' rights, corruption, and the football calendar only served to repeatedly smash that ball into the back of the wrong net. This is a tournament which one respected British football journalist has called a 'stain on the beautiful game' with which the 'world is stuck' and that 'there could be no serious footballing legacy from holding the event in such an artificial environment'. Until recently, I was inclined to agree.

Hassan Al Thawadi is a lawyer by training, and definitely has a gift for compelling oratory and messages. He and his team were responsible for bringing the Afghani boy (Murtaza Ahmadi) of 'plastic bag Messi shirt' fame to meet his hero in December, which Al Thawadi insists wasn't a PR stunt, rather "we had an opportunity and we wanted to utilise it to bring joy to a young boy". A stunt it may not have been, but it's great PR, and he and his team are on a PR mission to convince sceptics like me that Qatar 2022, far from being a tragedy, may truly represent a new beginning for football and the Middle East.

In Cambridge to speak about issues that transcend both football and religion but in which they are, and will be, intimately entwined, Al Thawadi crafted his address around La Convivencia (a concept coined by historians to describe inter-confessional coexistence in the medieval Iberian Peninsula). He argued that Convivencia can represent "aspirational principles and values", which contrast with modernity where, "in spite of its closeness and interconnectivity, and the enhanced access to information, we are drifting further apart." An ideal to be aimed for, his Convivencia is less about religion per se and more about an interconnected global community. In fact, Al Thawadi barely spoke about religion at all. He didn't need to. Religious understanding and cooperation was implicit in his wider message about the World Cup's power to "tie so many strands of this turbulent planet together". Nevertheless, as religion is the primary focus of the work of Woolf Institute and DICID – although, of course, the greater goal is also a more understanding society in general –, let's bring this back to religion for a moment.

Sport connects people across every perceived cultural boundary and in football, religious boundaries are crossed so easily that it’s as though they don’t exist. For a sport where race and sexuality remain issues – despite commendable and partially successful action to counteract this [Kick it Out; Rainbow Laces] –, both religiosity and religious difference are surprisingly uncontroversial. In fact, arguably the most regular and most public display of multi-confessional religion occurs every week in football leagues around much of the world before audiences of millions when players take to the pitch and simultaneously enact their superstitious, ritual, and religious practices together. When they come out of the changing room last, eat grass, jump over touchlines, cross themselves, and pray, it's religion and ritual.

Most surprising is that this is rarely discussed. No one seems to notice. Perhaps this is because, as Al Thawadi rightly pointed out, everyday examples of positive human actions sadly aren't "considered the reality, but the exception". Perhaps also the meaning of these practices aren't recognised. If all European football fans knew that Mesut Özil, Karim Benzema, and Paul Pogba were Muslims, would they respond and react differently? I sincerely hope not. Because the lack of reaction to this collective display of religion and rituals, represents a more understanding and accepting humanity than we often see.

Yet religion remains one of many challenges for Al Thawadi and his team. Convincing players and the media who adhere to other religions, as well as women and those who identify as LGBTQ+ that they will be safe and free from harassment in Qatar will be crucial to the tournament's openness and success.  Similarly, even if the religion of players is inconsequential for them, convincing ordinary football fans to visit a Muslim country in the desert in the lead-up to Christmas in 2022 won't be simple. Unsurprisingly with Al Thawadi's slick operation – there will be no collapsing bridges with this World Cup –, they've already realised this and have a plan. The committee are talking to national football associations and will take fans to Doha during the next five years in order to show them the venues and encourage them to attend the tournament.

Al Thawadi was like Arsène Wenger in a press conference; no question went unanswered. There were no diversionary tactics here, nor metaphorical parking of the defensive bus; he was prepared to address the most difficult issues, and, when questions weren't asked about eg workers' rights, he raised the subject anyway. We learned about sustainable stadia designs and construction to allow for later redevelopment and downsizing (with stands that are no longer required to be donated to developing footballing countries); and, the initiatives to prepare for the tournament and to build a legacy for "Qatar, the region, and beyond", including: an academic centre of excellence for the sporting industry, the Josoor Institute, Challenge 22, and Generation Amazing.

Perhaps my opinions were overly informed by the negative perspective of many in the Western press. Yet, I'm absolutely not saying that their concerns on both footballing and humanitarian grounds aren't warranted; the committee have some serious issues to confront as Adam Sobel's documentary at Sundance this year highlights. I won't become an apologist for Qatar or Fifa. But I would challenge anyone to remain holistically sceptical after hearing Al Thawadi speak. All World Cups and mega events have myriad inherent controversies; so perhaps, in the case of Qatar 2022, instead of solely dissecting the problems, we should also focus on the good news already emerging. Qatar can afford it; they've had a long run-up and are using it advisedly; and they seem genuine in their determination to make this a great moment of revitalisation for the entire Middle East – goodness knows it needs some positive news.

I no longer think that this tournament will be like losing on penalties after being 2-1 up and scoring an own goal in the 90th minute. I'm not yet convinced that it'll be Cruyff against Brazil in 1974 or Iniesta against the Dutch in 2010, but it might at least be a worldy from outside the 18-yard box and could have as many positive outcomes for its hosts (and hopefully the winners) as the tournament and those five penalties in Berlin in 2006.

When asked what his audience could do to help, Al Thawadi, slightly in jest, said "it's a Ponzi scheme, we're looking at the multiplier effect. If you're here, if you're convinced by it, go and talk to other people."

So... here I am. Telling you. Reminded again of the enduring love, togetherness, and hope expressed by humanity in the face of hate, division, and despair and of, as our speaker himself so eloquently put it: the power of football "to transcend politics and enable humanity to blossom".

Jessica Tearney-Pearce is a Woolf Institute Cambridge PhD candidate at St John's College and in the Faculty of History, University of Cambridge. Her research focuses on inter- and intra-cultural and confessional communication and the sharing of practices, spaces, and ideas in the pre-modern Mediterranean, and her current project examines religion and travel at sea.