The Force of the Argument and the State of Debate

Professor Simon Lee reflects on the Woolf Institute seminar of 25 November 2015, in which Lord Rowan Williams, Dr Atif Imtiaz and Dr Ed Kessler discussed how faith communities should respond to violence. The session was chaired by Sughra Ahmed, Programmes Manager at the Woolf Institute and hosted by Rev Neil Thorogood, Principal of Westminster College. 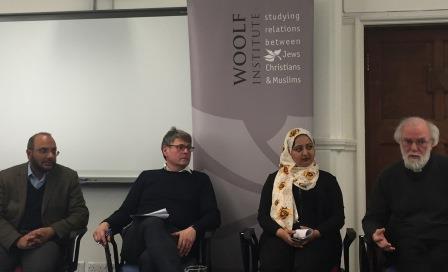 Inter-faith discussions in the aftermath of the Paris attacks are predictable. Well-intentioned religious folk will say that Islamic State is not really Islamic and that even if it were, it is wrong to say that Islam is alone among faiths in having texts that can be used, or mis-used, to support violence. So why do we keep going to such seminars, why are the Woolf seminars different, and how can we make some progress towards understanding a constructive way forward?

This particular seminar was coming to an end. I was sitting at the back when a person just in front of me asked whether there were any lessons for us from the Troubles. Dr Ed Kessler sensed that not everyone in the room knew what the questioner meant so checked he was referring to the conflict in Northern Ireland and then suggested that it wasn't only the panel who could respond but that perhaps I might offer an answer.

This cameo in itself tells us much about the friendliness and graciousness of the Woolf Institute. Not everyone would be familiar with the term, 'the Troubles'. Not everyone would know who, in a crowded seminar room focused on matters of life and death after the recent Paris attacks, has experience of other conflicts. More grace came when Lord (Rowan) Williams then made sense of my attempted answer. The same spirit ran through the earlier contributions of Sughra Ahmed of the Woolf Institute, Dr Atif Imtiaz of the Cambridge Muslim College, Rev Neil Thorogood of Westminster College and the others who spoke from the floor.

All this niceness, however, will not necessarily provide an effective answer to the question which the Woolf Institute had set, prompted by the latest Islamic State attacks in Paris: how should faith communities respond to violence? One mistake is to become hooked on the word 'violence' and to start a litany of apologies for Islamic, Jewish and Christian 'violence'. Another mistake is to focus on the word 'Islamic' in the expression 'Islamic State' and in variations on its theme, from IS to ISIL to ISIS, thereby missing the significance of the 'S' word, 'State'.

For lessons from the Troubles in Northern Ireland, in my opinion, include the need to distinguish 'violence' and 'force', on the one hand, and on the other, to distinguish 'terrorism' and the 'state'. The answers are connected.

This seminar was happening on white ribbon day, a campaign to oppose violence against women. There is a big difference between the violence of domestic abuse and the necessary force used by the police to restrain such an abuser. The violence is unjustifiable whereas the force is authorised by the laws of the state to protect those at risk of harm, which is the first duty of the state. States accept constraints on their own behaviour, in accordance with the rule of law, to respect human rights and to pursue the common good. States are committed to force, not violence, to authority, not power, to debate, not destruction. States are entitled to band together to defend citizens from unlawful attacks by terrorism which violates not just borders but also human dignity.

Of course, those opposed to what they saw as the British state's occupation of Ireland disputed the authority of that state and claimed to be justified in using violence to oppose it. But the state made clear that it continued only so long as it had the consent of the people there and that change could be achieved by peaceful means. In Scotland, more devolution has taken the nation closer to independence from Westminster than any amount of violence in Northern Ireland has achieved. So there came a point when proponents of violence, and implacable political opponents, agreed to talk, or at least to talk about talking. And the rest is history.

The untold history, however, is of innumerable little gatherings, often of those well-intentioned religious folk, which kept hope alive in the darkest of times, believing that our day would come, the day in which the force of argument and the state of debate would determine the common good. I was the co-founder of Initiative 92, a citizens' movement which established the Opshal Commission to listen to all-comers, including those then supporting violence, at a time when they were subject to broadcasting restrictions and when the political talks about talks had stalled.

It is not our lot, in academic and religious seminars, to change the world. But we can clarify the terms of debate and offer imagination (as Rowan Williams argued here) to communities that are 'lost for words' (the title of my own submission to the Opsahl Commission). It then needs more political characters, like my erstwhile colleagues at Queen's University Belfast, Mary McAleese and David Trimble, to come forward and challenge their supporters. Those seen to be entrenched in nationalist and unionist views of the world proved themselves capable of reaching out and they are the ones who have the standing in their own communities to carry people with them. Eventually, even those committed to violence came to see ways out of the Northern Irish Troubles, armed only by the force of argument.

Even in Islamic State circles, there will be such leaders. If we cannot find them and engage with them, then indeed the combined legitimate force of states will be needed to defend us from violence. But if we do establish dialogue, we will never know if their emergence can be traced to particular encounters in Cambridge or elsewhere, with half-formed ideas relayed imperfectly several times yet eventually capturing the imagination of someone who can not only fight but who is not afraid of debate.

So I keep coming to Woolf seminars because the aim is noble, the people are inspiring and there is a genuine desire to engage those of us in the back row. There is always the chance that someone will listen to an unpopular point of view. There is every chance that Woolf have the wisdom and influence to make the most of unfashionable ideas. I trust Woolf to gather together people of diverse views, to listen, to learn, to form independent judgments and to make a difference.

This article is written by Simon Lee who is Executive Director of the Cambridge Theological Federation, a Fellow of St Edmund's College, Cambridge, and Emeritus Professor of Queen's University Belfast.