The Complexity of Sacred Space

Following a recent visit to Jerusalem and Amman, PhD student Austin Tiffany reflects on the politics and resilience of sacred space. In the first of two blog posts, Austin looks at the complexity of sacred space.

We walked out into the expansive plaza of Al-Haram al-Sharif, greeted by a unique mix of crisp air and warm sunshine. "You may not be political", our guide of the Dome of the Rock said, "but the air you breathe is". 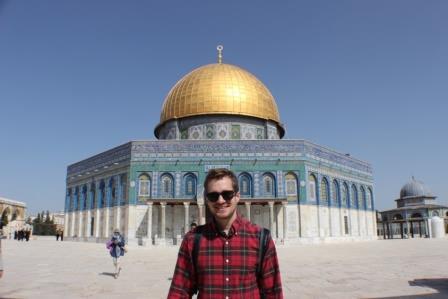 Austin in front of the Dome of the Rock

One can only learn so much about Jerusalem and Amman - the history that spans thousands of years and the complexities - in a few days. The pilgrimage to the Holy Land, carefully and thoughtfully planned by Matt Teather and Ed Kessler, exposed participants to sites important to each of the Abrahamic faith traditions. We met with religious leaders, civic leaders and academics, all with immense wisdom and understanding of the complexities of the region, both religious and political.

A few days does not give us a full understanding of the issues at hand, but we can begin to comprehend the state of interfaith in the region that is so important to the rest of the world.

The Western Wall, just a few minutes' walk from the Dome of the Rock

We visited and experienced three sacred sites of the Abrahamic faiths: The Dome of the Rock, the Western Wall and the Church of the Holy Sepulchre. Each poignantly reflected the beauty, awe and histories of each of the Abrahamic religions. Each uniquely different from the others, they shared one thing in common. The space was sacred, but the air was heavy.

These spaces are highly contested and often serve as the focal point for interfaith and ecumenism, as well as the tension, division and political gridlock that surrounds these sacred sites. This tension – which seems more about identity and territory more than religion alone – does not need describing at the first two sites, but the division could not be clearer. The people at each site were dramatically and obviously different, the guests wandering around were also distinctly different. In the Church of the Holy Sepulchre, run by three different Christian denominations, ecumenism was championed but there seemed to be very little overlap in those visiting the site of Calvary – controlled by the Franciscans – and the Empty Tomb – controlled by the Greek Orthodox. I must admit I had only 90 minutes of experience in the Church, but first impressions revealed three separate churches which happen to share a roof (and the most holy sites in Christianity). 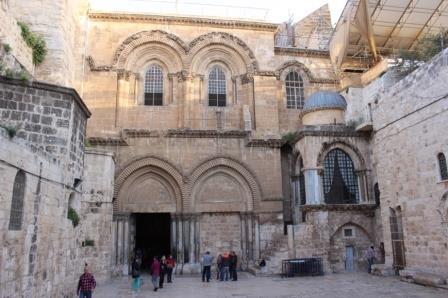 Speaking with members of the group, reactions to visiting the sites were a mixed bag. A Christian found the Western Wall profoundly moving; a Jew did not. At the Dome of the Rock, a Jew entered with awe; a Christian was relatively unmoved. In the Church of the Holy Sepulchre, a Muslim walked away amazed; a Christian indifferent.

We make pilgrimages to these locations because there is something special, something set aside about them. They are vitally important to each faith and rightly so. For centuries of religious adherents, these spaces represent a 'thin place' where the distance between Heaven and Earth seems ever so close, to evoke Celtic tradition. One can see it in the tears shed, the silent moments of contemplation that escape the bounds of time, the look of wonder in one's eyes. So yes, the space is sacred, but not for everyone. 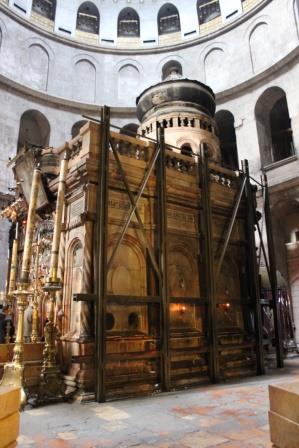 His Beatitude Patriarch Theophilos III, whom we met on our second full day, encouraged us, in this city of tension and division, to find the holiness of God wherever one finds oneself in the city, regardless of the tradition. Yet, for some, the heavy air and division between and among faiths often leads us to perceive these monumental sites in a less than sacred way – rather a manifestation of a history of religious distrust. But that does not mean sacred spaces do not exist. They do, but it is vital not to overlook the sacred spaces and, very importantly, good work going on in the alleyways and suburbs, the small organizations fostering peace and hope for this region. That will be discussed in next week's blog: The Resilience of Sacred Space.

Austin Tiffany is a first year PhD student in the Department of Sociology at the University of Cambridge. Austin's PhD research examines contemporary interfaith training of priests and rabbis in the United Kingdom and the United States.