Philip Rushworth looks back at the Symposium convened by the Woolf Institute and the Centre of Islamic Studies.

The Woolf Institute in partnership with the Centre of Islamic Studies convened the Symposium on Religious Conversion in Cambridge on the 15 June 2015. The Symposium provided a platform for leading academics, experienced practitioners and postgraduate students to present their work in the field of religious conversion from different faith perspectives, disciplines and time periods. The speakers were joined by an engaged audience of community workers, students and academics in related fields from organisations and universities across the UK. 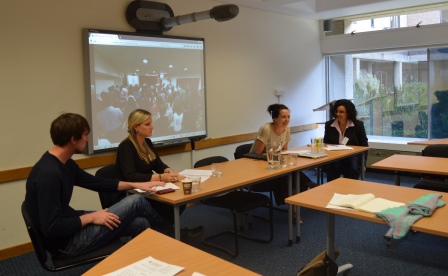 The first panel on the 'Public Sphere' began in mid-20th century Egypt with Dr Hanan Hammad's discussion of the representations in popular culture of the conversion to Islam of the Egyptian singer Leila Murad. The focus remained on 20th century North Africa with Kirsty Bennett's talk on Isabelle Eberhardt's public mediation of her conversion(s) to Islam in French colonial Algeria. The panel concluded with a reflexive account of the meaning - or lack thereof - of 'conversion' in a Hindu context by Shaunaka Rishi Das, Oxford Chaplain for Hindu Studies.

Panel two featured presentations on converts to Islam in prisons in the UK by two practitioners with considerable first-hand experience, Tanayah Sam and Maqsood Ahmed. In panel three, on 'Ethnicity, Gender & Class', Dr Esra Ozyurek situated the conversion to Islam of two former East Germans in the context of their alienation in unified Germany. Dr Joanne Britton delivered an account on how converts to Islam in the contemporary UK 'confront the absence of race and the presence of racism', and the panel concluded with a comparison by Shahla Suleiman, from the Centre of Islamic Studies, between male and female experiences of conversion to Islam from the Centre's Narratives of Conversion projects.

In the final panel on 'Ruptures and Continuities', Dr Kathryn Kraft explored charity provided by churches in Lebanon to Syrian Muslim refugees, considering both its material and spiritual components, including instances of conversion, and the panel and Symposium concluded with talks from Cambridge postgraduate students, Dorothea Ramahi and myself. Dorothea explored conversion to Islam in relation to family in the contemporary UK and 'the making of intimate strangers' and I discussed the ethics of practicing the Quranic instruction to 'enjoin what is right and forbid what is wrong' in a convert support network in Manchester. Dr Paul Anderson from the Centre of Islamic Studies rounded off the Symposium by drawing together a number of themes that emerged from the talks and discussions throughout the day.

The Symposium was a rich and rare opportunity for researchers and practitioners to engage in a dialogue around the core theme of religious conversion from different perspectives, and this coming together elicited interesting and sometimes unexpected convergences in the meaning and experience of conversion from different regions, faiths and periods, while also highlighting its divergent, contextual and individual character. This theme of convergence/divergence was perhaps best reflected in the following questions that emerged throughout the day: what does the English term 'conversion' mean? What assumptions inhere in its meaning? In what instances does its meaning make sense of conversion, and when is it limited? These questions, and many others, continued into the evening when participants, organisers and guests came together for dinner at Gonville and Caius College and visitors to Cambridge had the chance to witness two spectacles: the sun shining and the beginning of 'May' Week.

This article is written by Philip Rushworth who is a PhD candidate at the Faculty of Asian and Middle Eastern Studies at the University of Cambridge.