Jessica Tearney-Pearce discusses the theme and content of a recent workshop held at Universität Konstanz, 'Shifting cultures and rituals in the medieval Mediterranean and beyond'. 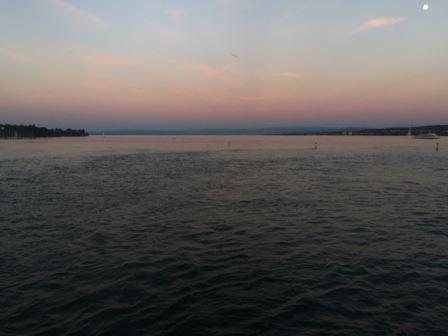 The Temple of Bel at Palmyra began its life in the year 32 as a space for worship of the 'Roman' gods. From the fourth century, it served a Christian community as a church, before being adapted into a mosque in the 1130s. A building complex having such a varied history may surprise some, and the Temple of Bel may be presumed to be a rare example, yet many buildings underwent and undergo evolutions and adaptations as they are subject to different peoples. Neither are buildings the only cultural elements that are shared, exchanged, or adopted between groups.

Comparably, in his De pace fidei (1453), Nicholas of Cusa sought potential points of compromise which might engender peace among adherents of the three major monotheisms. Understanding that some Eastern Christians practised circumcision, perhaps as a consequence of living in close proximity to Muslim and Jewish populations, Cusanus suggested that as 'it is quite uncertain how peace can be maintained among believers when some are circumcised and others are not…, if, for the sake of peace the majority were to conform itself to the minority and to receive circumcision, then I would deem that this should be done in order that … peace might be established on the basis of mutual agreement'.[1]

These examples, and many others like them inspired myself and my colleague, Dr Clara Almagro Vidal, to bring together a group of scholars for a workshop entitled 'Shifting cultures & rituals in the medieval Mediterranean & beyond', held at the Exzellenzcluster Kulturelle Grundlagen von Integration, Universität Konstanz between 18 and 20 July 2016. The aim of the workshop was to explore the cross-pollination of religious and cultural concepts, ideas, and customs that occurred as a result of the migration, interaction, and cohabitation of peoples from different religions and cultures in the long medieval era. In Cusanus' example, circumcision is a religious custom which was borrowed due to close contact with peoples who practised it, and which could in turn be borrowed deliberately as a means to foster social harmony. We thus sought to examine elements that were borrowed from one culture by another when they came into contact, the reasons behind deliberate borrowings, the implications of borrowings, and the reactions in response to the resultant changes. This allowed our participants to expose the medial grey areas in order to identify how contacts between groups from different religions reshaped them despite contemporaneous attempts to maintain orthodoxy. 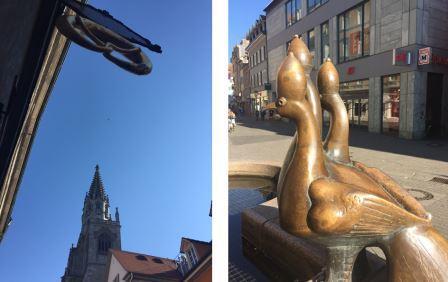 Left: Tower of Konstanz Münster; Right: Three-headed peacock with three tiaras, symbolising the three Popes and Antipopes during the Great Schism, which led to the Council of Konstanz (1414–1418)

Participants from a variety of disciplines including linguists, historians, art historians, architects, and theologians, and whose research focuses on diverse geographical and temporal spaces engaged in lively debates about multiple subjects.

Professor Dorothea Weltecke (Universität Konstanz) examined the world chronicles written by medieval Christians, Muslims, and – to a lesser extent – Jews. She explained that such universal chronologies could function as a means to deal with plurality as they united plural religions under one umbrella in one chronicle. In this way such works, when written by Jews, Christians, or Muslims could constitute apologies for universal monotheism. Moving from the shared use of a genre to the shared use of a group of texts, Dr Maria Ángeles Gallego (CSIC, Madrid) showed how the medieval Arabic translations of Greek science, particularly Aristotle, and the consequent reception of the ideas inherent in these texts, influenced Muslim and Jewish scholars' study of grammar. Their interpretation of Greek logic saw them introduce particular rationalistic concepts in their linguistic works.

Professor Juan Carlos Ruiz Souza (Universidad Complutense, Madrid) enlightened us about the deliberate recycling of spolia (reused building materials) in the Iberian Peninsula during the middle ages. He highlighted that there were not only financial or expedient reasons for this, but also political and ideological. So buildings constructed by Muslim rulers took spolia from Hispano-Roman and Hispano-Visigothic remains. Later, as Umayyad Cordoba came to be perceived as part of the history of Spain, Christian rulers used spolia from Umayyad constructions alongside the Roman and Visigothic material, as can be seen in Pedro I of Castile's palace, the Cuarto Real, in Sevilla. Analogously, Professor Antonio Almagro (CSIC, Granada) detailed Castilian kings' adoption and adaptation of traditionally Islamic styles for palatine architecture. Professor Almagro argued that borrowing particular architectural spaces also allowed these Castilian rulers to employ the ideological implications inherent in the styles, which exalted the ruler.

Looking East, Zhu Li (Universität Konstanz) explored the construction of identities undertaken by Catholic and Nestorian travellers between China and Europe. And moving from the East back toward the West, Professor Adam Knobler (Ruhr-Universität Bochum) provided a fascinating insight into how, contrary to many late 20th-century scholarly narratives, medieval and early modern peoples in the eastern Mediterranean could be aware of contemporary Western stereotypes about them and, not only this, but were active agents in the creation of these stereotypes. In doing so, Professor Knobler demonstrated that people from the East often manipulated Western peoples' expectations of them rather than being subjects of Western idealisations of Eastern identity. He also asked my personal favourite question arising from the workshop: "When is a Muslim not a Christian?"

Dr Clara Almagro Vidal (Universität Konstanz) asked what happens to land in the aftermath of territorial conquests. With a focus on the lands taken by the military order of Calatrava in Castile in the mid 12th century, she emphasised that changes in landscapes happen quietly and gradually as the imprint of meanings and values given to landscapes and their elements left by the previous population were adapted, erased, or built over depending on the flexibility or intransigence of the new rulers. Retaining this focus on landscapes, I spoke about late-medieval Western Christian visitors to the River Nile. I examined the beliefs and practices, both shared and discrete, that these visitors to the river held, learned, and enacted, especially those that involved or in some way derived from interactions with locals and their religions and cultures.

Finn Schulze-Feldmann (Warburg Institute, London) explored the influence and presence of the pagan Sibylline oracles in the apocalyptic angst at the turn of the sixteenth century. He argued that these prophecies – initially very popular with lay audiences– were appropriated by some Reformation theologians as legitimate revelations. Similarly examining how an overlap between cultural and intellectual currents fed theological discourse, Dr Davide Scotto (Universität Tubingen) investigated Hernando de Talavera's application of Pauline theology to some ceremonies and practices undertaken by new conversos who had been accused of Judaizing. Dr Scotto illustrated that, in his Catholica impugnacion, Talavera developed the method which he employed later in his career when evangelising to Muslims in Granada.

Former Woolf Institute Visiting Fellow, Professor Ana Echevarria (UNED, Madrid / Universität Konstanz) examined the process of appointing Muslim and Jewish jurists for minority populations under Christian rule in 14th­–15th century Castile. Intriguingly, Professor Echevarria demonstrated that the elections of such officials were very much collaborative efforts between the minority communities and their Christian rulers as it would not have been acceptable to either group to have unqualified or unpopular officers. On the theme of the law, Professor Filomena Barros (Universidade de Évora / CIDEHUS Évora) spoke about the increase by the later 14th century in legal measures to restrict spaces available to, and to limit the movement of, Jews and Muslims in Portugal. Her paper highlighted that, contrary to the implications these harsher laws would suggest, the practicalities of daily life saw not only much more movement than was technically permitted, but that the special quarters reserved for the minority religious groups actually became shared spaces of much amiable interfaith interaction.

Religious figures could be 'shared' too, and Professor Alexandra Cuffel (Ruhr-Universität Bochum) explored the portability of tales about the Virgin Mary and their translations around and across the Mediterranean, with a particular focus on transmission from the East. Professor Cuffel argued that the Islamic regions of the Eastern Mediterranean formed a hub for tales relating to Mary's interactions with both non-Christians and Christians of multiple denominations. The Woolf Institute’s own Dr Esther-Miriam Wagner discussed some of the methodological problems that historical linguists face when confronted with written evidence alone to examine communication in the past. By looking at letters from the Cairo Geniza written in Arabic using the Hebrew alphabet but with occasional appearances of Arabic script, Dr Wagner demonstrated how particular languages and alphabets in documents can lead the researcher to make incorrect presumptions about the languages spoken by peoples of different religions in this past. This engaging talk inspired one of the historians in the room to later reflect that they 'never knew one could learn so much about interreligious relations from how someone wrote letters'. 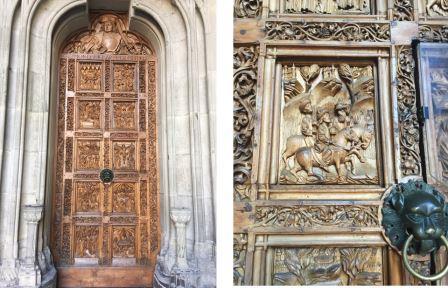 Participants at the workshop indulged in some historical sightseeing too. Konstanz was the setting for an important Catholic Church Council (1414–1418), which sought to end to the papal schism. As a result, and due to some fortunate survivals, the city remains littered with papal and imperial imagery, from frescoes on buildings scattered around the city depicting scenes from the Council, to statues and memorials within the cathedral and smaller churches. As the city is currently in the midst of celebrating the 600th anniversary of this Council, the streets are arrayed with the standards of the hundreds of notable invitees to this medieval meeting. In addition to sightseeing, the beautiful weather and high temperatures encouraged some of our attendees to cross their own boundaries and take a dip in the Rhine. 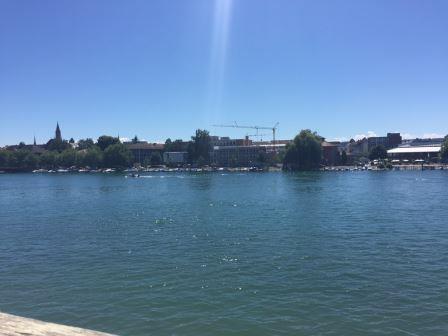 Spending three days by the river and lake in Konstanz, listening to high-quality, stimulating talks about this subject demonstrated how indispensable such workshops and the resultant collaborations are for the quality and substance of our individual research. There remains much to be explored about how peoples in the past redefined their patterns of living and thinking as a result of contact and exchange with different cultures. This is true across multiple spheres of existence and a broad spectrum of intentions. Our meeting reminded us how crucial it is to work across boundaries constructed in the past and across our own constructed boundaries – be they disciplinary, geographical, or temporal – in order to fashion a fuller picture of historical interfaith interactions, which inform our contemporary understanding and perspective.

Jessica Tearney-Pearce is the incoming Woolf Institute Cambridge Scholarship awardee for 2016/2017. Her research focuses on inter-cultural and inter-religious communication and the sharing of practices, spaces, and ideas in the pre-modern Mediterranean (c.300–c.1600), and her current project examines religion and travel at sea.

Jessica would like to thank her co-organiser, Dr Clara Almagro Vidal; Professors Ana Echevarría Arsuaga & Dorothea Weltecke for their support of the workshop; and, of course, all of the participants for attending and creating such a stimulating atmosphere. In addition, the organisers extend their gratitude to Universität Konstanz and, specifically, the Exzellenzcluster Kulturelle Grundlagen von Integration for sponsoring and hosting this event.