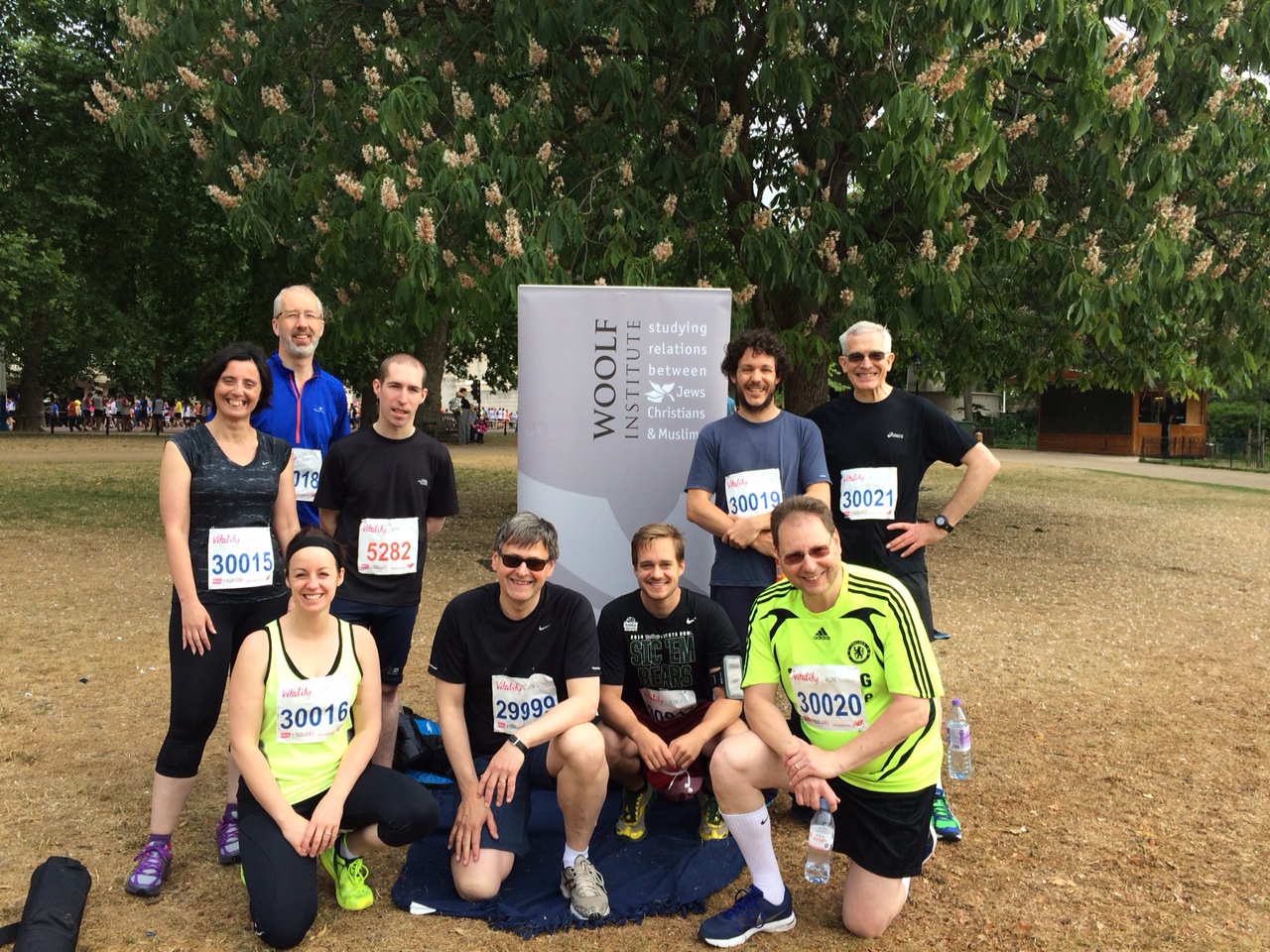 It was a long time coming... I can't remember when I started training but I recollect the days (earlier this year) of running a few paces, walking, running a few paces and definitely not going far, very slowly!! I had decided to join other colleagues and friends of the Woolf Institute on the British Vitality London 10K run to raise money for the Institute's student bursaries.

At 6.30am on Sunday 12 July 2015, some of the Woolf Institute team of runners made their way by car from Cambridge to Stanmore Underground Station where we parked and took the final part of the journey by tube to Westminster. From there, we walked to St James' Park where the rest of the team joined us. Matt (the Institute's Associate Director of Development) would be eagerly awaiting our return to greet us with two HUGE boxes of Krispy Kreme donuts!!

Apparently, 20,000 runners had registered to run. I had been warned by a very close friend of the enormity of the event but I just could not have imagined the crowds that were gathering as we drew ever closer on the long (at times, painfully slow) walk to the start line. It was just incredible – those running to run, those running to raise money, those running for fun (not sure how many of these there were…).

The open ceremony commenced just after 9.00am with various welcome addresses but, to be honest, we were so far back that we did not hear or see any of this. All we really wanted to do was to get on with the task in hand!! The run commenced at 9.35am but the start was a staggered one and we did not begin our run until 10.05am!

Suddenly, all the team had run on ahead and I was left on my own. My family and friends can affirm that I am not an athlete; I can run for the bus but running in a 10k had never crossed my mind (ever!) but here I was now amongst a crowd of strangers and yet there was a little voice in my head spurring me on. I could do this – I had trained and if I had to walk part of it, there would be no shame in that, just as long as I finished. In fact, I DID run all the way – every time the official banner stated the next kilometre completed, I was powered on for the next one. 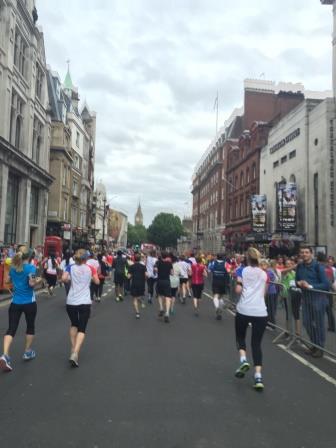 It was also an immense privilege to be running through London. As it was the run's 15th anniversary, the route was enhanced to include more of central London's famous landmarks and streets: we ran (up and) down famous thoroughfares such as Piccadilly, Lower Regent Street, Pall Mall, The Strand and Whitehall to name but a few and saw iconic landmarks like St James's Palace, Eros, Trafalgar Square, Westminster Abbey and Big Ben. Truly amazing!

We were greeted at the finish line with a bottle of water – a most welcome prize but for me, not the one I was really waiting for… With my bottle of water, I went in search of the Non Bag Drop Medal Marquee (our bags were thankfully with Matt – the queue to collect your bag looked horrendous!) where the event ushers hand over the coveted finisher’s medal – I nearly cried. It was just a fantastic moment as it suddenly dawned on me that I had actually finished the run!! My first 10k; my first PB!! 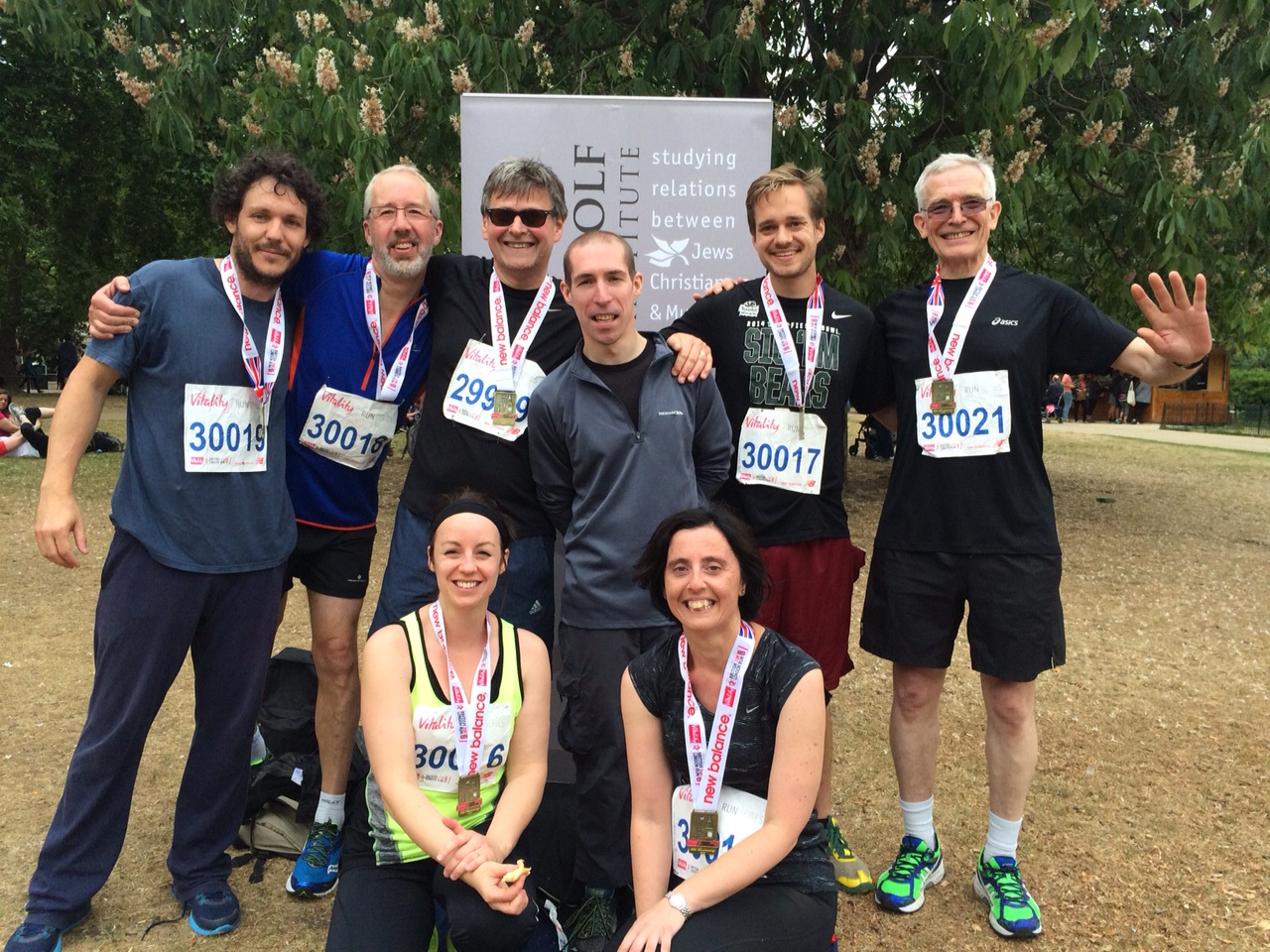 Wearing my medal with pride, I went to find Matt at the agreed meeting place where the rest of the team had already gathered and where the Krispy Kreme donuts were waiting for me – a probably MORE welcome sight than the bottle of water!! In the race pack we received prior to the event, the magazine stated that it's better to eat a little and often for the six hours immediately after the race rather than eating a big meal within the first hour! As long as donuts were involved at regular intervals during the six hours, I was happy (just a little tired but sugar-happy).

I had finished the run in an hour and 15 minutes which for someone who has never run, I think that is pretty good but praise needs to go to John Lyon (the Institute's Director for Strategy and Implementation) who finished the run in 48 minutes. Well done, John. We have already put your name down for next year's 10k!! I had a fantastic experience during the day, as did my fellow runners: the enormity of the event; the incredible route; the welcome finish line and the well-deserved (!!) medal (and donuts); and, most importantly, the knowledge that we had raised over £4,000 for the Woolf Institute's student bursary scheme.

Here's to next year's run…

Many congratulations and thanks to all the runners. And a special thanks to Matt for organising everything for us and being there to support us!

Thanks to everyone who supported us. We are immensely grateful.

This article is written by (a surprisingly not very tired) Dr Emma Harris, Academic Coordinator at the Woolf Institute. If you would like to support any of the runners, please visit the Woolf Institute's JustGiving page: https://www.justgiving.com/woolfinstitute/.

Photograph acknowledgements: Thanks to Austin Tiffany and Matthew Teather