Review of Martin Puchner's The Language of Thieves

In a previous life, I worked in Jena, East Germany as a research assistant on a project about Yiddish linguistics. As part of this, I also conducted some research into Rotwelsch, a most interesting German jargon of horse traders, thieves and members of the underworld, which borrowed quite heavily from Yiddish and thus also ultimately from Hebrew.

In my present life as Executive Director of the Woolf Institute, I had the great pleasure of hosting Martin Puchner, a professor at Harvard University, here at the Institute in 2019, with a conversation about his research on The Written Word, extinct languages, literature and religion.

Now these two lives have coincided as Prof. Martin Puchner has just published a book on the aforementioned Rotwelsch, setting me up for a perfect blog.

Puchner uses the sociolect of Rotwelsch as a stimulus to delve into his own family history, dissecting the problems of post-Nazi Germany and its generational conflicts, along with discussions about history and race, and including homage to many distinguished intellectuals and scholars.

In the introduction and first chapter, Puchner draws us into his childhood, where Rotwelsch facilitated by an uncle's interest, became the family's private idiolect. He explains the oddity of why a middle class family like the Puchners would have such intense curiosity in a jargon associated with criminals and travelling people. There is also tragedy, with the said uncle dies young. Ultimately, a deeper dive into the family history turns a darker shade when Puchner discovers the involvement of his own grandfather in the discrimination and oppression of Jews in the Third Reich.

He then skilfully spins a wider net, drawing in Martin Luther's attitude to Jews, and how the connection between Yiddish/Hebrew words and Rotwelsch in Luther's writing was used to conflate Jewish and criminal identities, "Beggars, Jews and foreigners […] all mixed together, in Luther's mind. […] The figure of the wandering Jew played a role in associating Jewishness with vagrancy." (p. 31)

Each book chapter deals with particular themes or people in Puchner's life, reminiscent of Primo Levi's Period Table, with the writer also featuring in one of the chapters. Chapter 2 explains how Rotwelsch grew in popularity after the Thirty Years' War, where it changed from the language of itinerant beggars to one used by large roaming gangs of discharged soldiers, displaced peasants and other vagrants outside the order and boundaries newly defined by the Treaty of Westphalia.

The third chapter delves into family history and describes how German families and the Puchner family in particular dealt with their Nazi past, or more often did not deal with it, as there was an agreement not to talk. We hear about Puchner's conversations with his father, and Holocaust education in West Germany in the 1970s and 1980s. He recalls a girl from his class vomiting outside the Dachau concentration camp after a tour. This struck a particular chord with me, reminding me of my own class's tours to concentration camps in East Germany, where the focus was less on the Holocaust and more on Communist resistance against the Nazi regime. Minutes of awkward silence there often ended with whole classes breaking into embarrassed giggles.

There is more tragedy, as we learn that the father dies in a boating accident before more can be discussed, and issues resolved.

To keep this review appropriately short, let me quickly summarise the remaining chapters of the book. Chapter 4 describes the Rotwelsch archive Puchner inherited from his uncle, which also turns out to include a copy of Hitler's Mein Kampf. Chapter 5 narrates the life of Gregor Gog (d. 1945), King of the Tramps, and connects that story again to Puchner's father, someone apparently with a deep attraction to the traveling life. This includes discussion of private family matters, such as his mother's approach to the father's extramarital affairs. Chapter 6 concerns the mother's side of the family, including a (false) account about another grandfather having been in the concentration camp of Sachsenhausen. This draws in Primo Levi (obviously an inspiration for Puchner) and his excursions about the 'tower of Babel' that existed in the death camps, where lack of knowledge of German was a death sentence, and resistance was made even more difficult through lack of a common language. Chapter 7 describes a family connection to Prague, leading to digressions about Kafka, Yiddish and Rotwelsch, Rotwelsch in Prague, the famous Jewish cemetery, and a Czech thieves' language. Chapter 8 recounts his uncle's attempt to translate the Bible and other literature into Rotwelsch, bringing in Goethe, another Rotwelsch aficionado. Chapter 9 is mainly about the artificially created language Esperanto. In Chapter 10, we hear more details about Puchner's grandfather, the archivist. Chapter 11 treats the peculiarities of the German spoken by Nazis, with mention of Viktor Klemperer and Puchner's grandfather's connection as an archivist with the Nuremberg trials. Chapter 12 is framed by Puchner becoming an American citizen. Chapter 13 introduces an aunt and the general family dynamics of a scholarly family with aspirations. Chapter 14, discusses Rotwelsch in America – the American TV show Mad Men gets a mention, as it features the hobo signs that originated in the Rotwelsch communities of Europe – and, there is also reference to Wittgenstein, and sociolects in general. The final Chapter 15 narrates the encounter with a traveller speaking Yenish, and exposes the often painful gap between scholars and the objects of their investigation.

All the chapters end with short Rotwelsch vocabulary lessons. The lists of collated words made me aware again of how much Rotwelsch I used as a teenager, despite being unconnected to any of the social groups described by Puchner as Rotwelsch speakers. This was because in the youth scene dialects were heavily influenced by Berlin dialect, which in turn had been influenced by Yiddish through the medium of Rotwelsch.

In the hands of a lesser writer the connections made between great thinkers of the past and Rotwelsch and to the Puchner family history might have felt pretentious. It is testimony to Puchner's self-critical writing style that it never feels either clumsy or pompous.

As a linguist, I slightly take issue with the way Puchner conflates sociolects, meaning language forms used by particular social groups as part of a wider language system, and languages. He certainly understands sociolects, as is clear from his deliberations on pages 228-229, but I suppose he is a literary scholar, and this is where differences in his use of the term 'language' originate.

However, I would make a distinction between languages and sociolects in that the former show difference to one another in grammar, meaning in the way nouns are declined, verbs conjugated and words are conjoined syntactically. A specialised vocabulary without changes in the grammatical system – as is the case with Rotwelsch – does not make a language. Insisting that it does can sometimes become highly politicised and agenda-driven.

A good example is Judaeo-Arabic, where scholars posited a separation of Jewish language forms from those spoken by surrounding communities simply based on terminology used. This suggests a disconnectedness between Arab Jews and their surroundings, which clearly reflects a 20th-century perspective, and in turn is used for political purposes.

Another point I sometimes found difficult was a certain romanticisation of the milieu of Rotwelsch speakers and of unsettled life in general, and the highly male-dominated communities described.

In summary, notwithstanding the small kernels of criticism offered here, this is a wonderful book about Rotwelsch, and more generally about spoken language forms that provide identity to their speakers and ensure tight-knit networks based on shibboleths.

It is also a sometimes painful descent into family psychology and communication, examining the relations and connections between family members as well as the consequences of particular actions, which because of the particular history of this twentieth-century family has a wider significance and interest. As such, it is a reminder of how we all, no matter how disconnected we might seem, relate to the great events of our time, to places and to others, whether or not we are aware of them.

Dr Esther-Miriam Wagner is Executive Director of the Woolf Institute. 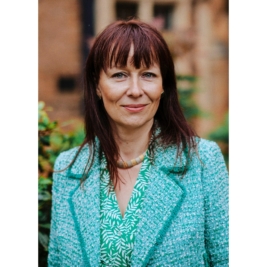 Dr Esther-Miriam Wagner is the Executive Director of the Woolf Institute and Fellow of St Edmund's College, Cambridge. Miriam joined the Woolf Institute in 2013 and was appointed Director of Research in 2017. She is an Affiliate Lecturer at the Faculty of Asian and Middle Eastern Studies and teaches on the MPhil in Middle Eastern Studies. Miriam completed her doctorate at the University of Cambridge on Judaeo-Arabic in the Cairo Genizah and has written and edited numerous books and articles on the subject. She has also become a popular speaker in recent years, being invited to deliver academic keynote addresses as well as lectures to the wider public, and her work has been featured on programmes such as on BBC Radio 3, History Magazine, and documentaries on the Cairo Genizah.