Dr Ed Kessler writes about the challenges of reading tolerant and intolerant texts from the Jewish, Christian and Muslim Scriptures. 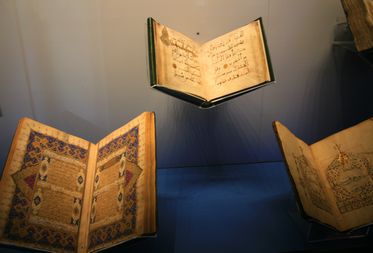 When the Woolf Institute convened its Commission on Religion and Belief in Public Life, which published its recommendations last December, we did so because we recognised the potential ambiguity in the role that religion and belief plays in society today.

That ambiguity springs in part from whether we choose to emphasise within our respective religious texts their universalistic and pluralistic interpretation or a conservative, literalist approach, based on their respective particular truth claims.

While in Britain today the Abrahamic traditions have tended towards the former, each also has a history of exclusivity, and, in the cases of Christianity and Islam, of world conquest. And if the Roman Emperor Constantine had become a Jew, I suspect the same would have been true of Judaism.

It seems, then, that it is not the Holy Scriptures of any religion that dictate historic behaviour, but rather the interpretation given to them, and these interpretations are of course the result of social, economic and political contexts. Jews led the way in this: the calls in the Bible for mass killing of Canaanites and Amalekites etc. (e.g., Deut. 20) has been interpreted away by rabbis, who argue that as these peoples no longer exist, the calls become inoperative. One can, and arguably should, 'reinterpret' one's Scriptures, if needed, even to the extent that they will appear to say the opposite of what the text says.

However, passages do have a life of their own, however much we reinterpret them.

The Christian Bible shares an intrinsic problem that is common to the Tanakh and the Qur'an, namely that polemic, against a named other carries a weight and authority throughout history. Moreover, they are constantly available for use or abuse, to justify the most appalling actions in the name of God. Their very existence is and remains the problem for they cannot simply be expurgated or interpreted out of existence.

However, the dangers can be reduced. For example, we can juxtapose contrasting texts from the same Scripture. For example, when dealing with New Testament accounts of abrasive arguments between Jesus and the Pharisees one might turn to passages which demonstrate their close relationship (eg., Luke 13:1). One might compare verses such as 'No-one comes to the Father except through Me' (John 14:6) with passages such as 'Other sheep I have which are not of this fold' (John 10:16).

The more violent passages in the Hebrew Bible can be contrasted with passages such as Isaiah 19:23-4, "Blessed is Egypt My people, and Assyria the work of My hands, and Israel My inheritance." Likewise when confronted with Qur'an 9:30, "The Jews said, Ezra is the son of God; and the Christians said, the Messiah is the son of God; they said this with their own mouths, repeating what earlier disbelievers had said; may God confound them!"; one might respond with 2:136, "Say [you believers], We believe in God and what was sent down to us and what was sent down to Abraham, Ishmael, Isaac, Jacob, and the tribes; and what was given to Moses and Jesus and all the Prophets by their Lord. We make no distinction between any of them".

Even so, this approach neither removes the existence of problematic texts, nor their availability, so, whilst contextualisation is essential it does not always render the polemic innocent. The text's original context is not the only necessary source of its meaning or effect. To 'solve' the problem at a historical level does not change the history of a text's effect and interpretation.

One of the achievements of the study of Jewish-Christian relations has been the realization that texts have a history; and a compromised history at that. It is impossible to read the Passion narratives of the Gospels without recognising the antisemitic uses to which past readings of them have been put, (notably Matthew's additional comment: 'And all the people answered, "His blood be on us and on our children!"' (27.25)) The Jewish-Christian dialogue has resulted in tackling hard sayings and difficult texts. This exercise has yet to be applied to difficult passages on the Qur'an although there are positive signs, such as the work of Markfield College on polemical verses, which seek a more inclusive and pluralistic approach to other faiths and none.

Dr Ed Kessler MBE is Founder Director of the Woolf Institute, Vice Chair of the Commission on Religion and Belief in British Public Life and Fellow, St Edmund's College, Cambridge.