Writing on his blog, Nigel Baker, British Ambassador to the Holy See, discusses religions against extremism. We reproduce the article here by kind permission of the Ambassador. 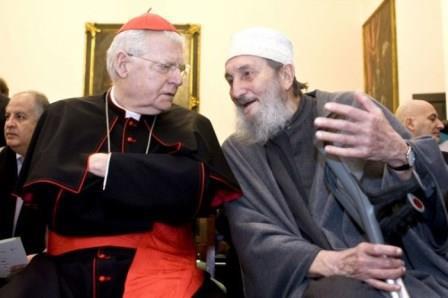 After recent days, we can now add Brussels, Lahore and Istanbul to the growing litany of places directly affected by extemist violence. This was committed apparently in the name of religion, against targets variously identified by the perpetrators as Christians, Israeli tourists, and ordinary "secular" citizens, going about their normal lives. The words "religious" and "extremism" are increasingly associated in the media and in the public mind.

Yet it doesn't have to be so, as three examples from just this week serve to demonstrate.

Firstly, Pope Francis's own Easter Monday response to the bloody attacks in Lahore, targeted against the Christian community but also killing Muslims and any others including children unfortunate enough to be in the vicinity of the bombs. The Pope's spokesman commented that true faith – and this reflects not only Christianity, but all the major religions – seeks "to build paths of compassion, and solidarity, and with those who suffer, paths of dialogue, justice, reconciliation and peace". Extremists want to generate hatred and division to justify their cause. The Holy See is equally determined not to give them that satisfaction.

Secondly, it was brought to my attention that this week is the 500th anniversary of the creation of the Jewish Ghetto in Venice. The year of cultural, artistic and spiritual events inaugurated on the occasion by the Italian Jewish community will allow participants to consider the meaning of the Ghetto in history, philosophy, art, faith and politics. As one press statement put it, "an occasion for reflection and warning to help us root out every new ghetto, not only physical but also mental and cultural". What was striking is that the statement came from the Italian Islamic Religious Community (COREIS). A glance at the COREIS website and the reader is struck by their emphasis on tolerance, anti-extremism, anti-radicalism, and a determination to cooperate across institutional and religious boundaries.

Thirdly, an example from history being celebrated now. On 5 June this year, Pope Francis will canonise Mother Elizabeth Hesselblad, the Swedish woman who restored the Brigittine Order in the 20th century. She was a convert from Lutheranism, and worked hard to overcome the traditional and often deeply held prejudices between Catholics and Lutherans in her native Sweden. During WWII, in Rome, Mother Elizabeth protected and saved many Jewish families in the Brigittine house in the city. She did this at the risk of her own life, resisting another form of terror, another form of extremism that we know as Nazism. A Catholic sister, she is honoured at Israel's Yad Vashem memorial as Righteous Among the Nations.

Three examples of religion against extremism. It's one reason why governments like mine are working closely with religious communities to tackle extremist propaganda and recruitment. We are, and must be, allies in the same cause.

This article is written by Nigel Baker, British Ambassador to the Holy See.

This article first appeared on the Ambassador's blog at http://blogs.fco.gov.uk/nigelbaker/2016/03/31/religions-against-extremism/. It is reproduced here with the kind permission of the Ambassador.

The Woolf Institute is delighted to work with Ambassador Baker on our training programmes for the Foreign and Commonwealth Office on the dynamics of religion and faith in global society.  See further comments on the FCO training from the Ambassador: here.