Religion in the Calais "Jungle"

Prior to its destruction in October 2016, the migrant encampment on the outskirts of Calais, widely known as the jungle, was a place of religious, ethnic, linguistic, and social diversity.[1] On this strip of land exposed to the brutal Channel winds, thousands of migrants from as far abroad as Afghanistan, Iraq, and Sudan coexisted as they sought a means of passage into the United Kingdom.

When I first visited the camp in 2015, I was struck by the many manifestations of religious identification and practice I saw there. I visited an elaborately decorated Orthodox church, several mosques housed in tents or shacks, and a small compound built by a group of evangelical Christians. Many migrants wore visible crosses or rosaries over their clothes, some displayed tattoos with Christian iconography. When I spoke with the inhabitants of the camp about their journeys, references to faith and God's will were recurrent.

On subsequent visits, I also met volunteers from across France, Europe and even North America, who cited their religious faith as a central motivation for coming to Calais. Amongst the volunteers who came individually or as part of a group, I met Catholics, Protestants of various denominations, Muslims, Mormons, and Buddhists. Even for volunteers who identified as atheist or non-religious, the camp was a place where religion was an unavoidable topic. As Clémence, a 21-year-old nurse explained to me, "you have to think about spiritual things here because when you're talking with the refugees, the conversation goes to the spiritual really quickly". 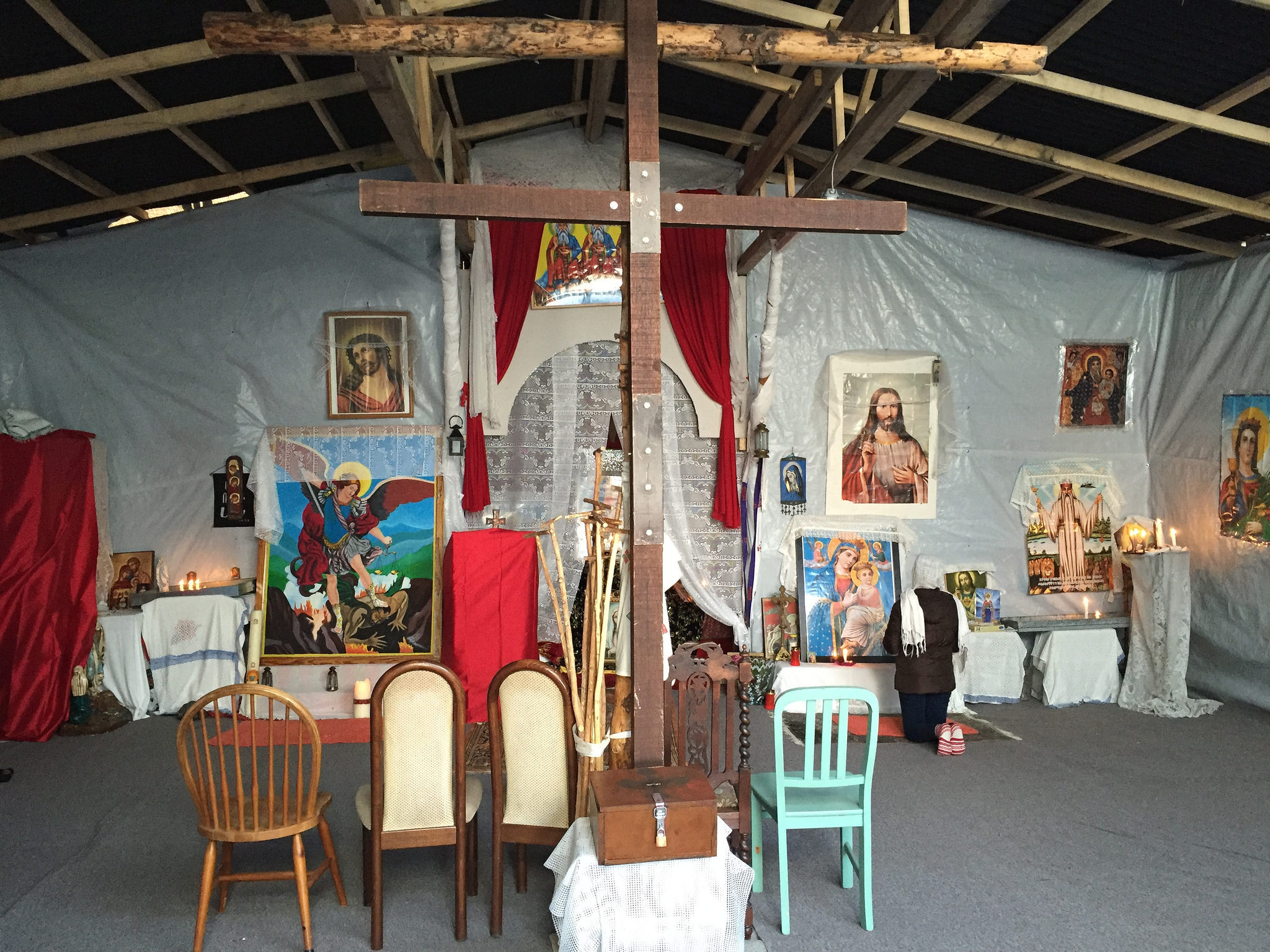 Church in the Calais "Jungle"

The anthropologist Michel Agier describes refugee camps as hors-lieux (outside-places): spaces of exception where the laws and conventions of the surrounding territory are largely suspended.[2] In the context of my current research on the relation between religion and the experience of migration in France, the camp in Calais stands out as a liminal space where religiosity played an important role in structuring the inhabitants' lives.

A number of scholars, notably Timothy Smith, have argued that migration is a "theologising experience" and that migrants turn to religion as a psycho-emotional resource in the face of trauma.[3] Something I observed in Calais, is that this resource-mobilisation strategy can be pragmatic as well as spiritual. Religious practice offered a psychological resource that migrants' could mobilise against the hardships they faced during their journey and within the camp. But it also helped them to occupy their time whilst waiting for an exit opportunity. For example, when I asked Abdallah, a 32-year-old man from Sudan, why he felt it was important to pray every day, he replied, "What should I do here? I am lost. I know in the morning, I get up and I come here [to pray]. If I stay outside, I do nothing, maybe I become confused in my head". 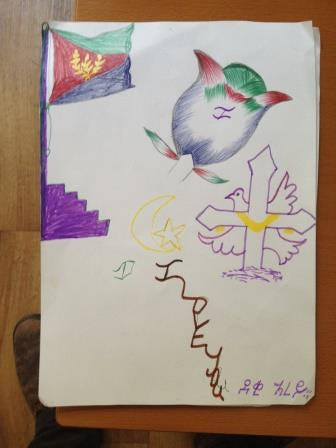 Drawing by an Eritrean man

Another pragmatic function of religion in the camp is as a means of social identification. Cohabitation between the diverse communities in the camp was largely achieved through informal relations of cooperation and trust. In this context where normal social relations and means of identification were suspended, identity markers were needed to situate actors in various fields of social interaction. National and language played a role in this, but religion was also mobilised to situate actors and define communities. As Lucie, a 25-year-old volunteer, recalled, "Really often [the migrants] ask me what my religion is. And they just can't believe it when I tell them I'm not any religion".

Religious pluralism and cohabitation between religious communities was a key component of the sociology of the migrant camp in Calais. Not all migrants in Calais practiced a religion, and many of the volunteers who accompanied them did not even identify with a religious faith. Yet the topic of religious identity and personal faith was intrinsic to the migratory experience in Calais. All of the actors engaged in the reality of migration in Calais were confronted with either the negotiation between religious traditions, or the discovery of religious alterities, or the definition of religious practices and identities within this very particular context.

[1] At the time of writing, May 2017, the number of irregular migrants present in Calais has again increased to several hundred individuals. However, due to the dissuasive policies of the prefecture and the municipal government, no new encampment has yet been built.
[2] Michel Agier, Le couloir des exilés. Etre étranger dans un monde commun, Éditions du Croquant, 2011.
[3] Timothy L. Smith,  "Religion and ethnicity in America". The American Historical Review 83.5 (1978): 1155-1185.