Refugees in Germany: Learning from Berlin?

The refugee situation dominates the year 2015. In the summer, the German government doubled the figure of refugees expected to enter the country this year: at least 800,000 people. 'The world sees Germany as a country of hope and of opportunity, and that wasn't always the case', the German Chancellor, Angela Merkel, welcomed the challenge, reassuring the country that the arrival of hundreds of thousands of refugees was a 'national task' that 'we will manage'. Having faced criticism for her characteristically long silence on the topic, Merkel eventually came out to promise large-scale support for asylum seekers. She demanded 'German orderliness' be complemented by 'German flexibility', to speed up registration, housing, schooling, employment, and other bureaucratic processes.

Eruptions of discontent over the refugee influx occurred predominantly in small East German towns, but officials were quick to condemn participants and silent supporters of xenophobic rallies. At the same time, volunteers founded thousands of initiatives across the country: Germans donate food and clothes, offer language classes, help with registration, and even take asylum seekers into their private homes. When thousands of refugees arrived at Munich's central train station in one day, the authorities were inundated with donations: running out of storage space, the police had to ask residents to stop bringing more. Surveys show that a substantial majority welcomes the government's approach.

Nonetheless, Aiman Mazyek, the head of the Central Muslim Council in Germany, highlighted that the millions of refugees would change the country. But he sought to reassure Germans that they 'don't have to be afraid of a more diverse republic – openness and diversity will pay off, not least economically'. Politicians and academics agree with Mazyek. Germany will change – its government and people have decided to accept the challenge, offering a Heimat (homeland) to people fleeing war and persecution. But what kind of country will this new Germany be? Some possible answers might be found in Berlin.

Until recently, the 330,000-inhabitant district of Neukölln had a solely negative reputation. In 2006, a local comprehensive school made national headlines when its teachers wrote an urgent letter to the Berlin Senate, seeking help: they could no longer contain exploding student violence. Since almost two-thirds of the students had a Turkish or Arab Migrationshintergrund (migration background), newspapers purported that their unwillingness to adopt German values had caused the breakdown – even though the headmistress highlighted that social deprivation led to student frustration, and not their cultural identities. Her nuanced assessment, however, was less popular with the media.

Furthermore, Neukölln's then district mayor, Heinz Buschkowsky, depicted the neighbourhood as everyday proof that multiculturalism had failed. Writing regularly for BILD, the leading tabloid, and through books such as Neukölln ist überall ('Neukölln is everywhere'), Buschkowsky became a nationally known figure. Many Neuköllners, however, saw his polarising critically – particularly so in the district's north. The northern parts of Neukölln are characterised by a mix of pre-war condominiums and postwar social housing complexes, with high social and cultural diversity. Most people here have parents and grandparents that weren't born in Germany. Turkish greengrocers, working-class German corner pubs, Arabic hairdressers, and One-Euro shops line the cobbled streets. 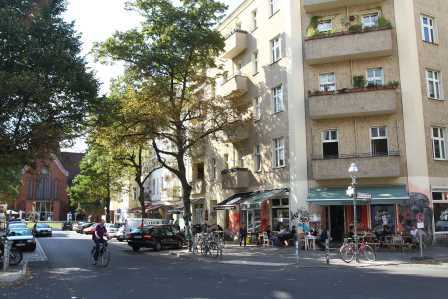 More recently, organic bakeries, coffee shops, and art galleries have appeared, too: since the nearby Tempelhof airport was closed and turned into a gigantic park in 2010, rents have been rising in north Neukölln. Digital nomads – creative computer programmers and start-up developers from all over the world – now frequent cheap supermarkets alongside long-term residents. English has replaced Turkish and Arabic as the most frequent foreign language in many areas, and young students have moved into apartments that were uninhabited few years ago. One important outcome of this eclectic coexistence of people from a range of economic, social, cultural, and religious backgrounds is the emergence of intercultural groups, led by highly motivated new Berliners, such as the Salaam Schalom initiative. 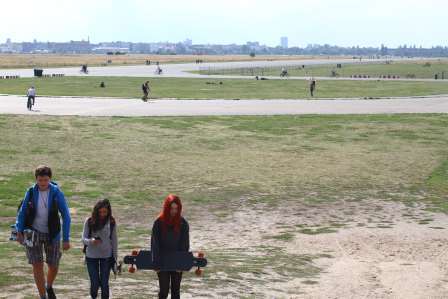 After having been attacked by thugs outside his house in West Berlin, a Berlin rabbi warned that some parts of the city, namely those characterised by poor Muslim communities, had become dangerous for Jews. Specifically, he named Neukölln. 'My Jewish friends and I found this a very problematic statement – we all know Jews who live in Neukölln and wear the yarmulke publicly. They've never had any problems', Mark, one of the founders of Salaam Schalom, explained to me. Salaam Schalom is an initiative by Muslim and Jewish Berliners, seeking to demonstrate that the assumption of inevitable enmity between members of the two faiths, resulting from Middle East politics, is too simplistic. Instead, they emphasise solidarity between Jews and Muslims, since both groups constitute minorities in German society, struggling for recognition and for the acceptance of difference. Together, they lobby politicians to reverse a law banning officials from displaying religious symbols at work. In July, they staged a large-scale demonstration outside Neukölln's district hall, calling headscarves and hijabs important parts of the neighbourhood. Their slogan was: 'We are Germany'.

Berlin's Muslims are increasingly self-confident. Their prayer rooms used to be hidden in basements and in the backrooms of Turkish shops – but ten years ago, Neukölln's new Sehitlik mosque was opened, illustrating emerging pride and a desire for public recognition among the city's Muslim population. Volunteers give weekly tours of the mosque to the interested public, explaining both its mesmerising architecture and Islamic culture to Berliners and visitors. 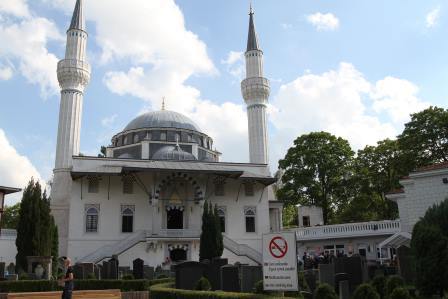 The Sehitlik mosque, north of the new Tempelhof park

Salaam Schalom – run entirely by predominantly young volunteers, many of whom have an academic background – organises workshops, panel discussions, and brunches, often in the Sehitlik mosque's cultural centre. At one event earlier this year, I spoke to Mansoor, a refugee from Gaza. He glanced at me with deep green eyes as he recalled his first Salaam Schalom event: 'I was really scared for the first hour; I couldn't talk. In Gaza, everyone believes that Jews outside Israel work for Mossad. I couldn't tell my parents or friends in Gaza that I'm going to such an event. I am so tired of the conflict. I just don’t want it to haunt me here, too. Most of my friends in Berlin are German or Israeli.' I was amazed at Mansoor's account, and at his optimism. Salaam Schalom helped at least one young refugee to find a way to confront traumatic experiences from his homeland through personal contact.

Muslims and Jews, aware of their status as minorities, join forces to address what Salaam Schalom organisers consider shared experiences in a still predominantly Christian country, at least culturally. They demand recognition that they, too, belong to Germany. Perhaps this initiative offers a glimpse of what kind of new experiences will characterise the country in the future. New alliances and demands to respect diversity are likely to shape a more heterogeneous Germany. I look forward to exploring more facets of such challenges and transformations in the coming months in Berlin.

This article is written by Dr Jan-Jonathan Bock, who is a Junior Research Fellow at the Woolf Institute. He is working with Dr Shana Cohen and Dr Ed Kessler on a major ethnographic research project examining emergent forms of community life in interfaith, intercultural, and other heterogeneous groups in relation to the concept of Trust in Berlin, Paris, Rome and London. Jan is responsible for the fieldwork in Berlin and in Rome. Read about the project here.