Dr Jan-Jonathan Bock explores the role of local museums in Berlin, with their depictions of migrant histories for integration efforts. 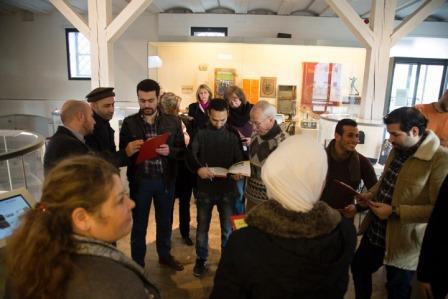 A peach stone. Dr Udo Gößwald, the director of the Museum Neukölln, points to the small object in a large round case. A dozen kids from a Willkommensklasse – a welcome class for refugees, thousands of which have been established across Germany, since every child under the age of 16 is legally required to attend school in the country – press their noses against the thick glass to take a closer look, pushing and shoving one another. 'Why do you think this is here?', their schoolteacher asks. The young Syrians and Afghans ponder the history of the curious little exhibit, which looks so unlike what they might have expected from their first visit to a German history museum.

Neukölln is one of Berlin's largest districts, with over 300,000 inhabitants, situated in what used to be West Berlin. Squeezed between the Berlin Wall and a large airport, both of which have since disappeared, it used to be an unattractive, working-class neighbourhood, and acquired a reputation for problematic ethnic diversity, crime, and deprivation. Today, Neukölln is changing fast: rents are rising, with young couples and students moving into recently renovated turn-of-the-twentieth-century houses, with high ceilings and elegant wooden floors. Gentrification is everywhere – as well as protests against its effects.

The Museum Neukölln is one of a dozen Regionalmuseen – regional museums – that complement the world-renowned exhibitions in Berlin's grand centre. Regional museums focus on local history, traditions, residents, achievements, and struggles. A common thread concerns the importance of immigration for Berlin's contemporary identity as a city full of different attractive neighbourhoods for tourists, students, artists, and creative minds. The peach stone tells such a migration story.

In the early 1990s, Germany coped with a large-scale influx of refugees, caused by the wars in former Yugoslavia. Unused to foreigners, suffering from economic decline, and living with accusations of being defective democratic citizens, xenophobic sentiments were common particularly among East Germans. In cities such as Hoyerswerda or Rostock, riotous mobs set ablaze refugee shelters, demanding an end to immigration and to financial state support for non-Germans. The incidents shocked the country. Naturally, comparisons with the past were common, also in the foreign press. In response to violent attacks and growing xenophobia, Udo Gößwald – who has been the Neukölln Museum's director since 1985 – planned a new exhibition. He went to refugee shelters and asked for everyday objects, which would tell the real stories of the people behind the migration figures.

Zakaria Al Saokal, a Syrian refugee, gave Gößwald the peach stone. Zakaria's brother, Fadil, had been imprisoned in Syria because of his membership in a communist party. In prison, Fadil carved a dove – a sign of peace – and flowers into a leftover peach stone. Zakaria then fled to Germany to avoid confinement alongside his brother. He brought the stone with him. Today, over 20 years later, it remains a touching and powerful object in the permanent exhibition '99 x Neukölln', based in the former horse stables of Britz Castle, in southern Neukölln.

In December 2015, Gößwald invited the first Willkommensklasse from the local Otto-Hahn-Schule to discover facets of Neukölln's history, in which migration and diversity have always played important parts. The pupils were male, predominantly from Syria, and at least 13 years old. Over 25,000 underage refugees arrived in Germany in 2015 without their parents, who have been killed, gone missing, or are still in the Middle East, hoping for a possible future in Europe. 54 such teenagers share a children’s home in Neukölln, supervised by social workers. In the museum, they tested their German language skills, assisted by bilingual year-9 students with a migration background from a nearby grammar school.

Gößwald and his team at the museum are seeking an active role in shaping newcomers' experiences and understandings of everyday life in their new city. Also in December, Gößwald launched a novel initiative in collaboration with the Neukölln Volkshochschule – the German version of an adult education centre. After 200 German lessons, course participants – predominantly refugees entitled to free language classes – can spend a few hours in the museum, seeking to answer questions pertaining to the exhibits. The group that visited the museum in December had to read historical street signs, muse over obscure apparatuses, and decipher inscriptions on old containers. On interactive touchscreen monitors, German texts explain the history and meaning of each object. The course participants engaged in lively discussions, in a mixture of German, English, Arabic, Farsi, and Urdu. After the excursion, the language students shared their findings and impressions back in the classroom. (The photographs accompanying this story are from the Volkshochschule German class, and not from the schoolchildren's visit, to protect their identities). 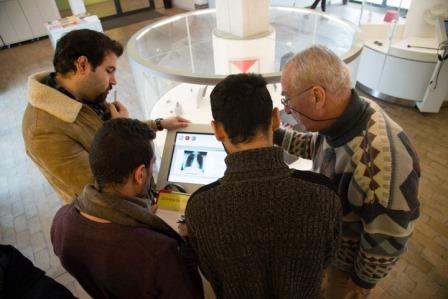 Gößwald and Bernd Müller, the director of Neukölln's Volkshochschule branch, explained their plans to me. 'Living a new life doesn't just mean shelter, warmth, food, and drink', Müller elucidated, whilst the Volkshochschule group was surprised to discover a fez hat among the 99 exhibits, but struggled to figure out that it was used by members of a smokers' club in the early 20th century, when an exotic fascination with Arabic cultures was widespread in Europe. 'Life is more than that. It's about participation and belonging in one's new society. We have a long history of migration here in Germany. Mistakes have been made in the past – now it's time to avoid them', Müller explaining the collaboration between his adult school and the museum. The museum director nodded enthusiastically.

Gößwald considers Berlin's regional museums particularly well equipped to support integration efforts, allowing newcomers to discover the society of which they are becoming a part in imaginative, interactive ways. The Neukölln Museum seeks to add to ordinary classroom teaching by turning museum visits into regular features for Volkshochschule courses and welcome classes. Diversity is a particularly important dimension of this exhibition, highlighting Neukölln's history as a place of immigration, from Bohemian Protestants over East Prussian refugees in 1945 to Turkish and Arabic guest workers. The fez hat illustrates the influence of non-local cultures on the lives of Neuköllners, and the peach stone shows also how people from faraway lands have turned Neukölln into a new home. Gößwald remains close friends with Zakaria Al Saokal. From a historical perspective, the newcomers from Syria, Iraq, or Afghanistan currently settling in Neukölln are nothing exceptional. The neighbourhood in which they are living has been shaped by people with similar histories and experiences. This might be a comforting message – both for those who are newly arriving and for those who are already living here.

This article, written by Dr Jan-Jonathan Book, first appeared online for Neukollner.Net and is re-printed here with the kind permission of Neukollner.Net. Dr Jan-Jonathan Bock is a Junior Research Fellow at the Woolf Institute. He is working with Dr Shana Cohen and Dr Ed Kessler on a major ethnographic research project examining emergent forms of community life in interfaith, intercultural, and other heterogeneous groups in relation to the concept of Trust in Berlin, Paris, Rome and London. Read about the project here.

Photo credits: With thanks to Emmanuele Contini for allowing us to use these photos.