Reflections from the National Holocaust Centre

"It was 1939 and a cold night in Eastern Poland, when the Russian forces came. Mama rushed into my room, told me to get my jacket and then just run.
And we ran and ran …
I was about 8 years old.
We left everything in our farmhouse, all my toys, my clothes … all I had was my nightgown and jacket. Outside, it was pitch black except for the occasional blasts of light from a nearby village. We could hear the screaming all around; it echoed through the sky. There was gunfire and then … silence for a while … before the gunfire started again.
We headed to the woods. But as we moved along the path, my Mama suddenly stopped. On the ground were two children, crying. They were next to the bodies of their parents, who had been shot and killed in front of them.
Mama, without thinking, scooped them up and told them to come with us. We just had to keep moving.
Slowly dawn arrived and with it, the light. Tired and hungry, we stopped … but we got caught by some Russian soldiers who took us to a camp in Siberia.
I don't remember much about that time, except the cold and the hunger. We ate grass to try and stay alive. It felt like the pain would never end until one day a group of us were told we were going on a train. We were bundled together like animals … there was no water, no food … we had to push dead friends out of the carriages.
The train slowly travelled along the track … until we stopped in India. Those of us who survived went to a maharajah's palace [probably a children’s home]. I had food and learnt to dance. After a year or so we were moved to Africa by the Red Cross and finally to England, where I met your grandfather. When I arrived, I had nothing. But look at us now – we have a home and food..."

My Grandma's testimony, like so many at the National Holocaust Centre and Museum, provide us with deep personal insights into a period of history that affected millions. When considering the numbers killed (approximately 6 million Jews, 2 million ethnic Poles, 270,000 disabled people … the list goes on), it is difficult to comprehend the scale of the trauma and we can forget that each number symbolises the death of a person: an individual, with their own life history. However, listening to the stories told by survivors, we can gain unique and valuable insights into that time. Their stories are told so that we can learn from them and hopefully prevent similar atrocities from happening again.

The National Holocaust Centre and Museum brings to life these types of memories. Photos, music and videos provide a rich historical tapestry of society before, during and after the war. For me, one of the most important aspects came from the videos of German citizens, who explained the deep social problems facing Germany before the war. They discussed their fear of the Nazi policing system, and the gradual increased persecution of the Jews. These recollections helped explain why such horrific events happened and why so many did not, or could not, do anything to prevent them. At the time there was a need to feel that there was a reason or cause for society's problems – and having a scapegoat to blame (such as a minority group), provided many with an easy answer.

Such reflections are still hugely relevant for us today. If we are to overcome prejudices and prevent genocide from happening again, we need to learn from those ordinary people who lived on either the perpetrator or survivor side of the story, because it is only then that we can understand why and how such events can occur. 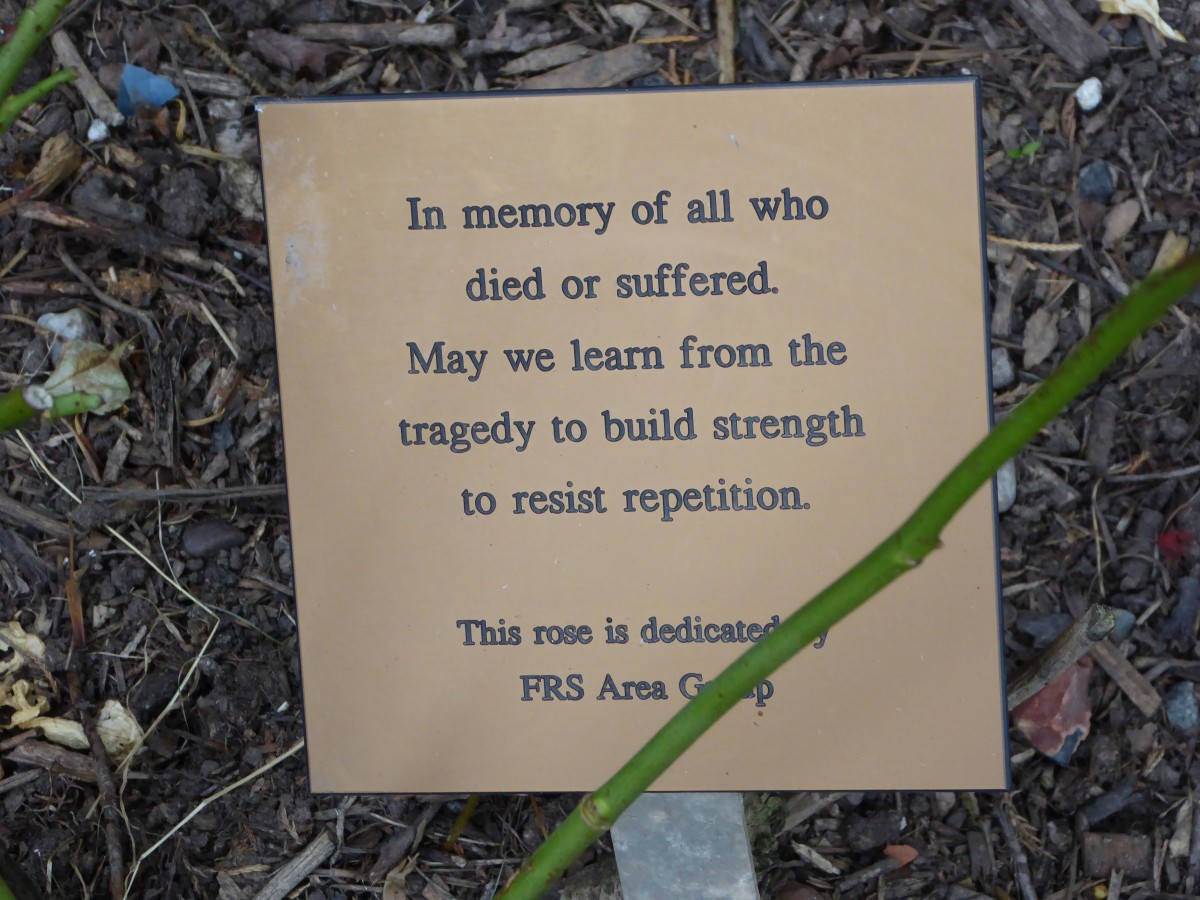 A plaque of remembrance at the National Holocaust Centre

Visitors to the National Holocaust Centre and Museum also take a journey through a young Jewish boy's life, from his home, to his school and finally to the train journey he took to England. His story brought to life how the social changes at the time happened to ordinary people: many were young children living with their families in their homes and villages, who went to school and played with their friends on the street. Life for many started changing and people found themselves getting gradually excluded from society. Over time this increased to forced relocation and then, in many cases, death.

Survivors, such as my Grandma, and the survivors who tell their stories at the Centre, provide us with deep and meaningful insights into a difficult and complex time. However, repeating such stories is only one aspect of the learning journey: if we are to truly learn from such atrocities, we need to reflect on how we can change as individuals, and as a society, to ensure such events do not happen again.

Dr Angela Quartermaine is the Senior Executive Officer for Public Education at the Woolf Institute. Before coming to Cambridge, she completed her PhD research into pupils' perceptions of terrorism at the University of Warwick.