"RE-framing education about beliefs and practices in schools: a lens and tools (concept based) approach" - reflections from the conference in March, 2014 to publication, December, 2015

Laurie Boone Hogen, the initiator and project manager of this interfaith conference and toolkit for US and UK teachers, reflects on the conference and publication sponsored by the Woolf Institute and the Faculty of Education at the University of Cambridge. 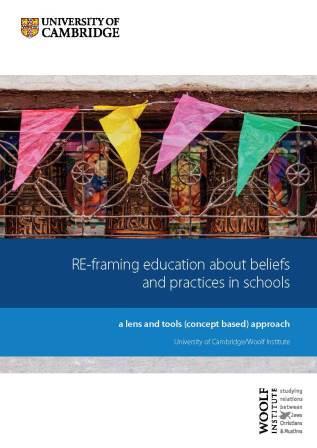 Cover of RE-framing education about beliefs and practices in schools

Following the aftermath of 9/11 in New York and upon my retirement from running a school in New York City in 2013, I was looking forward to taking courses about the relations among Jews, Muslims and Christians at the Woolf Institute. Early on, I submitted an idea to the Woolf Institute about an interfaith project involving Jewish, Muslim, Christian schools from both the UK and US. The idea was to get teachers from faith based schools in both countries together to share ideas about teaching their own faith and that of the 'other'. Then we would produce a toolkit of best practices. Cautious about the US restriction about teaching religion in state schools, the project did not include US state schools but did include UK state schools.

By chance, while taking my first course at the Woolf, I also attended an all-day conference run by Mary Earl, chair of Religious Education at the Faculty of Education of the University of Cambridge, about teaching religious studies to an increasingly diverse population in UK schools. I listened to Mary as well as to various presenters including one by Sahra Ucar regarding being a Muslim teaching religious studies in a state school and sat next to Sue Ward, Cambridge's RE advisor. Add to these three, Mohammed Aziz, the Woolf's director of public policy and public education, and Alice Thompson, the go-to person of the Woolf, and we had an extraordinary team! Thanks to Mohammed's unwavering support and excellent guidance and Dr. Ed Kessler's acceptance of the project, we organized a conference at the Faculty of Education that included 20 Jewish, Muslim, Christian and Secular schools, 10 from each country, who came to Cambridge for three days to attend workshops run by full-time teachers of RE and to listen to scholars as well as to unpack what the school participants had submitted in their case studies and questionnaires. Thus what started as a desire to get UK and US teachers of religious studies to find a model for best practices expanded into an exploration of how teaching and learning about the 'other' is taught in both countries and in many different types of schools with the outcome being the publication, authored by Mary Earl, RE-framing education about beliefs and practices in schools: a lens and tools (concept based) approach. In addition to this Toolkit, the Research Report, also authored by Mary Earl, details the research design, the schools' participation, the research questions and six key issues as well as the findings and recommended action. The Report also includes a data analysis.

Thanks to the expertise of the full-time practicing RE teachers involved - and Mary's reframing of these into a 'meta' training model - it has been possible to organize good practices observed into a lens and tools approach to teaching and learning about 'the other'. The aim is to help school students understand 'the other's' beliefs and practices through commonly (and scholarly) recognised concepts. These are: cultural understanding, identity formation, and issues of evidence, truth and proof. There are also three tools described, the use of which, developed over time, will help school students handle the three concepts internally and independently. The tools are: key enquiry questions, text and con-text (narrative), and difference and diversity (scale-switching). Since each lens also has its own self-study booklet teachers, especially those unable to attend regular continuing professional development courses, can adapt the model for their own schooling situation. The book also contains sections exploring ten of the best methodologies for taking this kind of knowledge into the classroom and a collection of narratives from Judaism, Islam, Christianity, World Cultures, Atheism, Humanism and Buddhism to help teachers exemplify, through narrative, the basic concepts behind the beliefs and practices studied. Lesson plans and illustrations use examples from Hinduism, Humanism, Sikhism and Buddhism as well as the three Abrahamic faiths and can be adjusted for teaching students between the ages of 8 to 18. There are lists of resources to aid in the teaching of all beliefs and practices as well as what is allowed in the US under the First Amendment.

It is our hope that by reframing education about beliefs and practices in schools through this lens and tools concept based approach we are providing a sound rationale for making practices meaningful for every young person today in every kind of school and at all phases of education. Given the fact that awareness of religious diversity is presenting great challenges throughout the world, I hope that this toolkit can inspire those who teach and those who learn to bring greater understanding and recognition of and respect for the other.

This article was written by Laurie Boone Hogen, who is a retired Head of School from New York and California as well as a past student at the Woolf Institute. She resides both in the Sonoma area in California and in Kings Cliffe village not far from Cambridge. Laurie continues to work with UK and US schools in the implementation of the Toolkit.

RE-framing education about beliefs and practices in schools: a lens and tools (concept based) approach is available to download here.