Putting Virtues into Practice: An Inside View on Roman Catholics' Responses to Migration in France

Alexis Artaud de La Ferrière writes about his ongoing research project on how Roman Catholic communities in France respond to the arrival of migrants and asylum seekers. 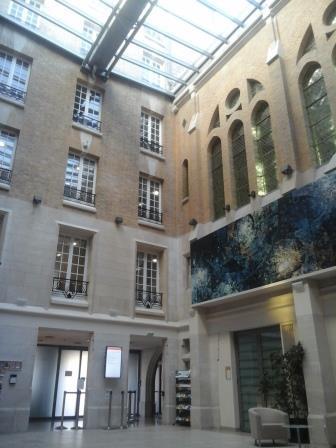 The newly refurbished headquarters of the Bishops' Conference of Paris

"I'm worried about what this is doing to our community. We're a very tightly-knit parish, but this has created such problems." Christelle was deeply troubled. An active member of her church, she had been moved by the images of migrants drowning in the Mediterranean and felt that her commitment as a Christian required of her to do something positive. For two months, she had been trying to mobilise her church community to set up a shelter for newly-arrived migrants in her parish in northern France. At first, responses from parishioners were encouraging. But as things progressed, more and more people expressed their unease with Christelle's plan. Everyone seemed to agree that as Christians they needed to be welcoming, but there was little agreement on what that principle meant in practice.

Since October 2015, I have been engaged in participant observation research at the Service National de la Pastorale des Migrants (National Service for the Pastoral Care of Migrants). Housed in the newly refurbished headquarters of the Bishops' Conference of Paris, the mission of the Service is to support and assist local teams in 86 French Catholic dioceses engaged in migrant support activities. This fieldwork is the first step in a larger project that aims to develop an understanding of how different religious communities respond to the phenomenon of incoming migration.

A staple in the history of anthropological studies, participant observation requires of the researcher to merge into his/her object of inquiry by becoming a participant in the activities and social relations of a social community. Whilst the approach raises serious ethical and epistemological challenges (which have become increasingly present in my mind over the first month of research), it remains an unrivalled methodology in terms of the depth of access and wealth of data it offers. It is also an exhausting modus operandi in terms of the cognitive dissonance that can arise from the dual role one must strive to maintain. Benjamin Paul described the difficulty inherent in this type of research thus: "Participation implies emotional involvement; observation requires detachment. It is a strain to try to sympathize with others and at the same time strive for scientific objectivity" (1953, 69).

As I negotiate with these methodological challenges, I find myself immersed every day in the heart of my research topic: continually discussing and exchanging with lay members and clergy about their views on migration, and the role of the Church with regards to migrants. This is how I met Christelle and many like her. Migration is clearly a 'hot topic' these days; it attracts enormous attention from all directions. But, for many Roman Catholics, the subject has become all the more pressing since September 6th, when, during his Sunday Angelus, Pope Francis appealed to "parishes, religious communities, monasteries and shrines throughout Europe, that they express the Gospel in a concrete way and host a refugee family".

Francis is known for his focus on the plight of migrants and other economically marginalised communities. But many Catholics are unaware that this appeal was actually a reaffirmation of principles promoted through the Church's social doctrine, which were codified in three key Church documents: Exsul Familia in 1952, Pastoralis Migratorum Cura in 1969 and Erga Migrantes Caritas Christi in 2004. Through these documents, the position of the Church has remained generally consistent and open throughout the twentieth century: calling on receiving countries to welcome economic migrants as well as asylum seekers, to promote their rights, to defend their dignity, and to recognise their cultural specificities.

Much is made about the number of subjects which currently divide the Roman Catholic Church: sexual morality, bioethics, the role of the clergy. Stories like those of Christelle may lead us to conclude that migration should be included amongst these divisive issues. However, I think this would be an incorrect interpretation of what is currently happening within the Church here in France.

From my perspective embedded within the Church's administration, what I see is that migration is a source of secular division but religious cohesion. This is a uneasy distinction to make. A number of authors have argued that the secular/religious distinction is neither clear nor fixed (e.g. Rivière and Piette, Charles Taylor). In the context of modernity, religion is less and less a point of orientation in people's choices and values. Whilst 64% of French residents describe themselves as Catholic, only 4.5% attend weekly mass (IFOP 2009). By a slight of logic, this has resulted in the assumption that people who remain religiously observant have very little orientation outside of the religious sphere.

Catholics in France have a broad range of views on the topic of migration: what should be done in favour of migrants, whether they constitute a cultural/security threat, how many migrants should be welcomed, which populations should be given priority. In the course of my research in Catholic communities, I see these questions debated frequently. But crucially, these debates are framed within a secular context rather than with reference to theological or moral concerns. In other words, where Catholics disagree on the topic of migration, they appeal to political or economic arguments; but where they agree, they appeal to theology and social doctrine. What is striking in my daily observations is the lack of dissent from the Church's core teachings on the topic of migration: across parishes and socio-economic distinctions, they agree on the principle of welcoming those forced to leave their homes. This marks a significant difference with, say, the issue of divorce or homosexuality, where Catholics increasingly oppose one another over the common core. But this still leaves substantial room for disagreement when it comes to putting their values into practice.

This internal tension evokes Alasdair MacIntyre's analysis of modern liberal societies, in which he argues that virtue requires embodiment in practice. According to MacIntyre, outside of this paradigm bound in teleological unity a community is reduced to "a collection of strangers, each pursuing his or her own interests under minimal constraints" (p. 251). The problem that someone like Christelle faces is not to redress her co-religionists on matters of theology or principle, but to transfigure values shared in abstraction into practice. How to do this within a modern social context, where moral neutrality overrides religious prescription? Such a question is especially pressing today when terrorism has become the case study in the reverse scenario - religious prescription overriding moral neutrality. 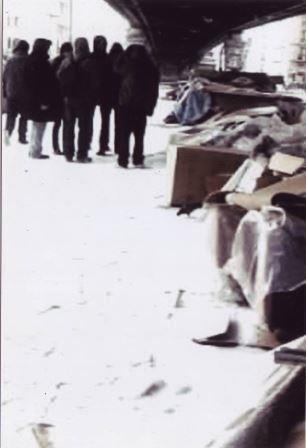 In my study of French Catholics engaged in aiding migrants, I feel that I am confronted with a sociological sub-category which is hard to situate in the popular imagination of the European twenty-first century: a religiously observant community that neither aspires to fanaticism nor is willing to fall into irrelevance or commemorative nostalgia. In my conversations with Christelle, this dialectic often springs to mind. Like many partners we work with, Christelle has to take account of her fellow parishioners 'material' commitments and concerns whilst encouraging them to practice their faith outside of their ritual devotions. In doing so, she is trying to give a religious orientation to their secular lives.

One thing I have learned thus far in my research is that the distinction between religious and secular, and extent to which faith should be a practical orientation in lives of the faithful, is not much clearer on the inside than on the out.

This article is written by Alexis Artaud de La Ferrière who is a post-doctoral researcher at the Groupe Sociétés, Religions et Laïcités (CNRS) in Paris. Further information on Alexis can be found on his website: http://parismigrations.com/.

*With thanks to Nelly Forget for permission to include photo.