Dr Ed Kessler reflects on his recent visit to Rome. 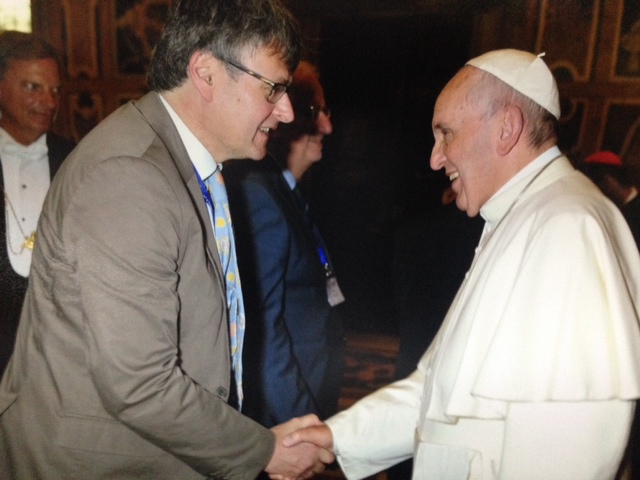 Earlier this month, I joined more than 250 Jews and Christians from around the world, active in dialogue and reconciliation who travelled to Rome to celebrate the 50th anniversary of Nostra Aetate. The three-day meeting was organised by the International Council of Christians and Jews and participants reflected on the past, present and future of the Jewish-Christian Relationship.

Nearly 50 years ago, on October 28, 1965, Nostra Aetate was published and revolutionized Catholic-Jewish relations. It terminated in a stroke a millennial teaching of contempt of Jews and Judaism and unequivocally asserted the Church's debt to its Jewish heritage. Known as the aggiornamento ("bringing up to date") the Second Vatican Council marked the beginnings of a fresh approach when the Roman Catholic Church joined the Protestant churches in reflecting positively on the "mystery of Israel".

In the 50 years since, Christians, so long instigators of negative attitudes toward Jews, have rediscovered a respect and admiration for Judaism, and the once-close relationship, which had become a distant memory, has been to a large extent restored. For Jews, the traditional view that Christianity was simply hostile has been replaced by a realisation that dialogue, even partnership, with Christians is possible. This transformation was illustrated by a workshop on Martin Buber, one of the most influential Jewish theologians of the 20th century, known for his exposition of the I-Thou relationship, and pioneer of modern Jewish-Christian dialogue. For Buber, a genuine religious conversation requires a physical and spiritual encounter that involves a respect that takes the other as seriously as one demanded to be taken oneself. This is no easy task and requires presence, wonderfully illustrated by Buber's inscription in a first edition of his book 'I and Thou' and presented to Pope Francis at a Papal Audience. Buber had written, 'only by spending time together can we meet the challenges of our time'.

This seemed an apt theme partly because Pope Francis took time to greet each participant individually – and a more than a few came away from his presence in tears of joy – but also because he told us that 'we are strangers no more, but friends and brothers and sisters…All Christians have Jewish roots'. The final words of his speech moved me most because he not only blessed us with the priestly blessing from the Book of Numbers (6:24-26) but he asked us all to pray for him. Some years ago I had the privilege of meeting Benedict XVI and whilst I was moved intellectually, Francis moved us spiritually, Jew and Christian, young and old religious and non-religious.

Pope Francis (restating the view of St Paul) talked not only of 'the covenant has never been revoked' but also that 'God continues to work among the people of the Old Covenant'. And, 'God has never neglected his faithfulness to the covenant with Israel and that through the awful trials of these last centuries the Jews have preserved their faith in God. And for this, we, the Church, and the whole human family can never be sufficiently grateful to them".

What Jewish and Christian conversations shared in Rome was an affirmation of each other. For Christians, the future of Jewish-Christian relations is found in the construction of a new and positive theology of the Church and the Jewish people, a formidable undertaking, because this is none other than a fundamental revision of Christian theology.

As for myself, I talked of my desire to create the theological space in which to affirm Christianity and establish a relationship based not on a lack of hostility but on common values; not on a lack of suspicion but on the creation of trust; a relationship based on a shared mission, critical solidarity and mutual affirmation. I suggested that Jewish acceptance of an 'irrevocable covenant' for Christianity might create the theological space for Christians to retain their own special relationship with God, to see their reflection in a Jewish mirror and deepen Christian faith in Christ and Christian respect for their elder siblings.

Who knows, perhaps learning how to be a blessing to one another is what Francis meant when he asked that we pray for him?

This article is written by Dr Ed Kessler, Founder Director of the Woolf Institute. Ed's lecture at the ICCJ conference focused on "Covenant as a Continuing Conversation in the Future".