For most people at the Woolf Institute, the past year has been one of ends and new beginnings. Throughout the academic year, a sense of excitement and expectation has been slowly brewing, centred around the Institute's big move into its new and very impressive lodgings. It is fitting that my research as a doctoral student has followed a parallel trajectory, having spent the last twelve months engaged in the uphill battle of penning the PhD dissertation.

Writing the thesis is very much a brick-and-mortar job, but I cannot bemoan the workload, for as pressure for results builds up, so does the ability to profit from one's own work. It has been delightful to transform the heaps of messy charter evidence, gathered during last year's visits to Spanish and Portuguese archives, into a coherent project. Seeing the chapters develop before my eyes, and most of all discovering unexpected subtleties for the first time after years revising the primary sources, has been truly satisfying. Looking back, my first steps as a PhD student in 2014 seem to have taken place a decade ago; the naïve and unexperienced dissertation proposal of my application, written by another person. 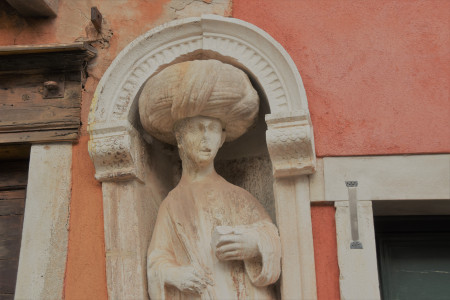 Thirteenth-century statue of a Moorish man with turban by a door in Cannareggio, Venice

My project has evolved enormously, for instance, in terms of how to approach religious categorisations. Often, religious groups – past and present – have been taken for granted. 'Muslim' (and 'Christian', or 'Jewish') labels can sometimes be unrepresentative of the communities claimed to be defined and protected, where ethnicity or class might be more appropriate forms of categorisation. This is the case as much today as in past societies: President Trump's "Muslim ban" is just the latest example of the way in which religious groupings can be imposed as a way of coercing those being defined under the label for ulterior motives.

This is what my dissertation tries to answer at its core: what was exactly meant by the categories of 'Jews' and 'Muslims' when these were defined by Christian legislators? Whether consciously or not, twelfth-century Christian rulers disregarded huge differences amongst groups of so-called Muslims (Berbers, Arabs, 'autochthonous' Muslims, converts, Black African and Eastern European slaves...); or the major discrepancies between the European Jewry that settled in the northern parts of Iberia since the tenth century, and the Andalusi Jews who migrated north after the 1100s.

Fourteenth-century fresco depiction of three Jewish notables, in an Old Testament scene, in the Church of Panagia Kera, near Agios Nikolaos, Crete.

Some of the documents that I study show that under the veneer of similitude lay a much more nuanced reality, that varied from town to town, and between city and rural hinterland. It is not always suitable to place the rich and educated Jews of Toledo or Barcelona – working at the Castilian or Catalan royal courts as high-level administrators – in the same category as their much poorer counterparts, for instance a rural sharecropper or a cobbler. Likewise, it is difficult to know if certain Muslim peasants were oppressed because of their condition as serfs, or because of their religion. The extent to which these categories are useful depends on the specific social, political and cultural contexts. In order to answer some of these and other questions, I am organising a workshop in collaboration with the Woolf Institute and the History Faculty, entitled "After the Conquest: convergent methodologies and divergent practices in the study of the Iberian Reconquista" (12-14 February 2018). 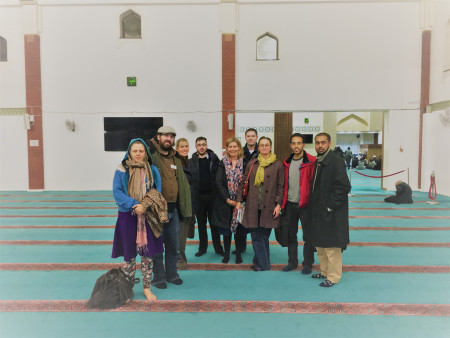 Students of the "Religion Is..." course, visiting the main prayer hall of the East London Mosque. Among them is Amine el-Yousfi (second from right), convenor of the course and a fellow PhD scholar at the Woolf.

The last twelve months have not been exactly quiet in European and American politics. Although my research centres on the twelfth century, it would be foolish to deny the impact of recent (and sometimes unexpected) events on my outlook. From the European refugee crisis, to Brexit or Trump's rise in the United States, the many discussions and thought-provoking lectures at the Woolf Institute have been key in informing my perspective. Particularly relevant to my research has been the questioning of the concepts of trust, tolerance, multiculturalism and religious pluralism, which European liberal societies have presupposed for too long. The Woolf Institute's report on Trust in Crisis, and the coming conference on Emergent Religious Pluralism(s) (to take place on 17-18 April 2018) ask similar questions to those pursued by my own work, concerning the mechanisms through which citizens from different religious communities build a common social framework and fabric; and the existence (or absence) of dialogue and mutual understanding in bridging the gaps between faith groups.

Fomenting an interest in inter-religious conversation has been a key aspect of my schooling at the Woolf Institute over the past three years. Most recently, I was involved in the "Religion is..." pilot course at the East London Mosque, created by fellow PhD scholars Austin Tiffany and Amine el-Yousfi. Taking place from October until December of 2016, I helped to lead the discussion on Abrahamic sacred spaces and the value of history as a methodology to understand inter-religious encounters. This programme, coupled with my brief but very enjoyable experience teaching global medieval history to the students of the Cambridge Muslim College (as well as the undergraduate lectures and supervisions I conducted throughout the year at the History Faculty) has enabled me to meet inspiring people and encounter perspectives that I had not considered before. Teaching has been not just a pleasure, but an education. 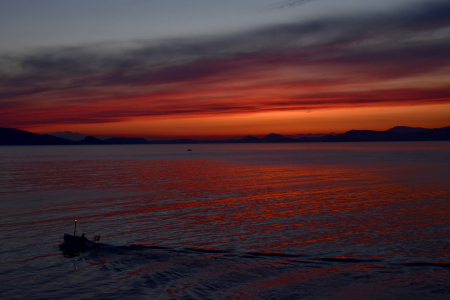 Sunset in the island of Hydra, Greece

Encouraging dialogue and building cross-religious networks and relationships are aims the Woolf Institute has not just exported throughout the UK but also promoted within. The Institute is a veritable familia, ahl and mishpacha. Whether Jewish, Muslim, Christian or non-religious, its doors are open to all. Whatever the future may bring, I will be forever grateful for granting me the opportunity to form part of it and supporting me every step of the way. My time in Cambridge might be up, but the acquired knowledge, the personal development and the fabric of relationships built during these years will carry on.

This article is written by Rodrigo Garcia-Velasco who was awarded the Woolf Institute Cambridge Scholarship to undertake his PhD studies at the University of Cambridge. His project, which is supervised by Professor David Abulafia, and co-supervised by Dr Esther-Miriam Wagner, focuses on the formation of frontier communities in Spain during the period of Christian expansion over the previously Muslim-dominated territories of al-Andalus, between the eleventh and thirteenth centuries.

Applications for the Woolf Institute Cambridge Scholarships entry 2018-19 will open in September 2017. Scholars will be co-funded by the Woolf Institute and the Cambridge Commonwealth, European and International Trust and selected from amongst applicants in the Arts, Humanities and Social Sciences whose research must be relevant to the focus of the Woolf Institute – the multi-disciplinary study of relations between Jews, Christians and Muslims. Details can be found here.