Rodrigo Garcia-Velasco, first awardee of the Woolf Institute Cambridge Scholarship, reflects on his second year on the PhD programme at the University of Cambridge. 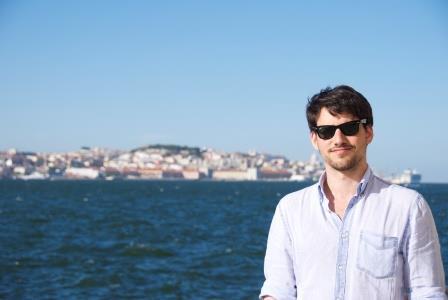 Rodrigo, walking near Almada, on the opposite bank of river Tejo, with Lisbon behind him

For most PhD candidates in the humanities and social sciences, second year is the time for research and travel. It can be hard to explain the difference between 'holidays' and 'fieldwork'; the eye-rolls and scepticism from friends and family are unavoidable. Research abroad certainly feels strange, and occasionally like a vacation. Nobody tells you what to do or where to be, as you are left to work on an often structure-less project. Indeed, at times it is difficult not to feel the impulse to visit the Museu Nacional d'Art de Catalunya, or sip a coffee while reading a book in the Lisboner bookshop Ler Devagar. And there is no one to stop this from happening – as a result, my desires sometimes got the better of me. But just when you feel inspired walking up and down the hills of Alfama or Gràcia, the mirage disappears, replaced by the inescapable truth of eight hours transcribing twelfth century land sales written in 'attempted Latin'. 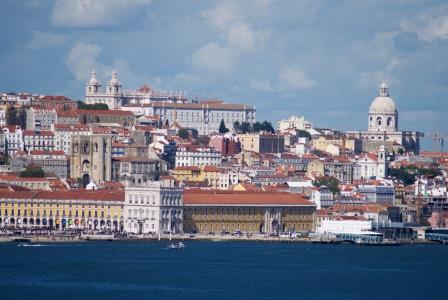 It would be foolish to complain, however, for there is plenty of time for leisure and enjoyment. But most importantly, the month-long trips in Madrid, Lisbon and Barcelona have been intellectually profitable. They have allowed me to explore vast documentary collections of the Arquivo Nacional de Torre do Tombo in Lisbon, the Archivo Histórico Nacional in Madrid, or Barcelona's Arxìu de la Corona d'Aragó. Talking to scholars on the ground has also provided a better understanding of the local academic trends in the different regions of Spain and Portugal.

More importantly, my research trips have involved – quite obviously – a lot of travelling. My journeys through Spain have been eye opening: no matter where you end up, a step forward in space is a step backwards in time. I have discovered and worked in magical places, well beyond the guidebook, in towns such as Lleida, Tortosa, Tudela, Logroño or Calahorra – almost to the point of exhaustion. Surprisingly, grievances about my peripatetic Grand Tour of Spanish cathedral archives have not been met with much sympathy. 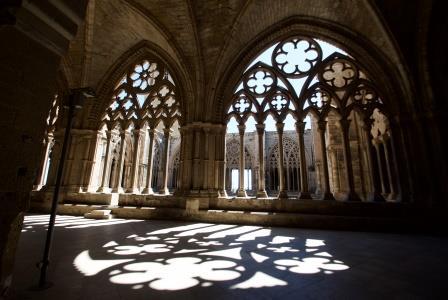 The Gothic cloister of the Old Cathedral of Lleida, Catalonia. The buildings were used as military barracks from the eighteenth century until 1918.

The rock-carved Monastery of Suso in San Millán de la Cogolla, where I arrived looking for evidence of Jews and Muslims in the monastic records, was particularly captivating. Hidden in the mountains of the wine region of La Rioja in north-western Spain, and tucked in between beeches and oaks and knee-deep snow, the temple of Suso has echoes of a Byzantine troglodyte monastery, all the while following a Visigothic and late-Roman architectural plan. The building is supported by a striking tenth-century horseshoe archway, inspired by contemporary architectural trends in al-Andalus under the Umayyads.

The horseshoe archway of the Monastery of Suso, in San Millán de la Cogolla, La Rioja

The horseshoe arches of Suso pose the question: how is it possible for an important Christian shrine and influential monastery to be artistically inspired by its Islamic artistic counterparts? Like many other examples scattered throughout Spain, Suso is living proof of blurred lines, intimate contact and interaction between the Islamic and Christian civilisations of Iberia over the centuries. 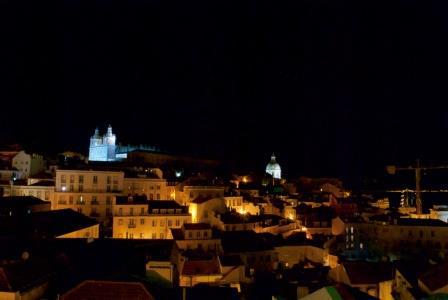 The neighbourhood of Alfama at night, with the Monastery of São Vicente de Fora at the top

Indeed, there have been many moments of reflection on my PhD project during the months of fieldwork. Walking, for instance, past the white-washed buildings and narrow and convoluted streets of the neighbourhood of Alfama in Lisbon. In its current urban plan, Alfama still recalls the Islamic city of al-Usbuna that existed before its conquest by Western crusaders in 1148 AD. During my strolls, I often wondered if the exchange and coexistence between apparently opposing civilizations went beyond the cultural and formal level. There is no easy answer to this question: it is misguided to pair the artistic or intellectual exchanges that took place in Cordoba or Toledo to any notions of coexistence and mutual understanding. Twelfth century rulers and scholars could probably tell both apart: Christian kings often lived surrounded by Islamic art and Andalusi courtly practices while simultaneously issuing appeals for campaigns against 'the Sarracen' enemy. The great Sevillian Maliki scholar Ibn Rushd (known in the West as Averroes) is renowned for spearheading the revival of Aristotelian thought, but he also helped to justify the mass deportation of the Christians of Granada to the Maghrib.

Musing on the beautiful streets of Alfama or the magical buildings of Suso, however, pales in comparison to the feeling of unearthing a precious document within a mound of boxes in an archive. My archival finds probably won't be the subject of a Pulitzer-winning novel or a Hollywood feature film, but it was thrilling, for instance, to find a collection of bilingual (Arabic-Latin and Hebrew-Latin) land sales, or a series of sources documenting the life of a Jewish man who called himself 'Abraham the Knight'.

The feeling of finding an important document is enhanced by the difficulties of archival research. Apart from having to mechanically read dull twelfth-century property sales, wills, and local legislation, I have had to battle Kafka-esque mountains of paperwork and administrative limbos. I have also challenged the staunch scepticism of local archivists towards the project, forced to convince them that I was – on the most part – a serious researcher and in need of original documents, guarded in boxes with admirable zeal, and endured some very heterodox conservation conditions, particularly so in small archives. 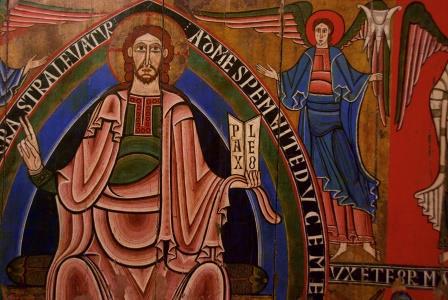 My discoveries were especially exciting as they touch on the central concern of my PhD: whether in the twelfth-century Iberian realms there could have been normal, day-to-day interactions between members of the three Abrahamic faith groups that transcended the ethno-religious divide. During this period, the kings of the northern Christian realms of Portugal, Leon-Castile, Navarre, Aragon and Catalonia, having conquered areas previously under the influence of Islamic al-Andalus, found themselves in control of large territories with heterogeneous populations. Many Muslims and Jews remained, for a variety of reasons, under Christian control, and were of great value to their new rulers. On the one hand, most of them probably spoke and wrote in Arabic or Hebrew, had different cultural and social habits, and did not worship the same god. However, during my fieldwork I have found many cases of autochthonous Muslims and Jews employed by the Christian rulers because they were equipped with essential skills such as trading, agricultural and artisan knowledge, and were a source of substantial taxes. 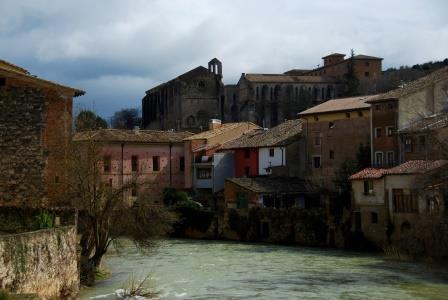 The old Jewish neighbourhood of Estella, in Navarre

Ultimately, it is difficult to know what won the hearts and minds of the new rulers of the land: was it brutal pragmatism, or plain brutality? Did the religious and ethnic divisions actually matter when push came to shove? In other words: is it possible that the Jews and Muslims of twelfth-century Christian Spain and Portugal were actively involved in Christian society, spearheading the consolidation of each of the states that undermined and ultimately caused the demise of al-Andalus? And how did the Christian rulers justify the contradiction of having a Christian mission while accommodating other religious groups at the core of their realms?

The discovery of the series of twelfth-century bilingual land sales might help to prove the existence of complex and sometimes contradictory commercial and legal inter-religious interactions. That the concerned buyers and sellers went to the efforts of translating the contracts can only be explained by a climate of relative tolerance and mutual understanding. However, at a more fundamental level, the use of Arabic, Latin and Hebrew languages in the documents also hints at segregation along ethno-religious boundaries. My other key find has been to trace the lives of men that challenge the stereotypes of the three Abrahamic groups. The aforementioned 'Abraham the Knight', for instance, appears to have accumulated great riches from fighting at the frontier – contrary to the interpretation of Jews in Christian society as passive moneylenders. 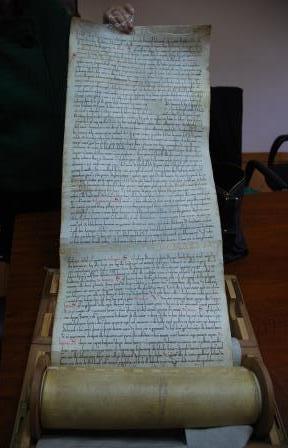 The municipal laws of the Navarrese town of Estella, written in 1164 AD

However, these examples may merely be anecdotal. The manuscripts also prove the substantial 'ghettoisation' of some Moorish and Jewish communities, and the disappearance in most conquered settlements of the local Muslim élites, who migrated south to al-Andalus or Morocco as the Christians gained ground. Medieval Spain should not be held up as a beacon of tolerance, and we must be careful not to project wishful and modern thinking onto the past. In sum, what is emerging from my fieldwork is a very complex picture. Contact between Jews, Muslims and Christians involved tolerance, pragmatism, and even collaboration, but also prejudice and violence – sometimes even simultaneously. 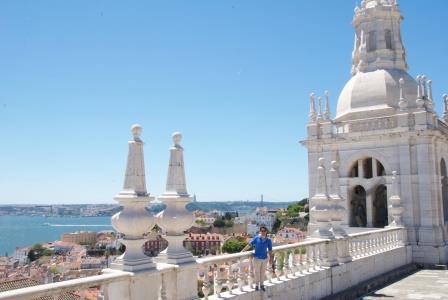 My intellectual journey has been as fruitful and as vast as my travelling. However, third year beckons, and with it the task of providing written insight on such an impenetrable subject. 100,000 words of it, to be exact. It is good to know that the wisdom of my supervisor, Prof David Abulafia, and my co-supervisor, Dr Esther-Miriam Wagner, will be there to guide me, as well as the invaluable assistance of the Woolf Institute. The task is daunting. My area of research cannot be covered comprehensively by a hasty PhD dissertation. It will require long hours in the library, methodical and tedious reading, careful thinking, and constant re-writing. I cannot help but feel the excitement.

This article is written by Rodrigo Garcia-Velasco who was awarded the Woolf Institute Cambridge Scholarship to commence his PhD studies in 2014-15. His project, which is supervised by Professor David Abulafia, and co-supervised by Dr Esther-Miriam Wagner, focuses on the formation of frontier communities in Spain during the period of Christian expansion over the previously Muslim-dominated territories of al-Andalus, between the eleventh and thirteenth centuries.

Applications for the Woolf Institute Cambridge Scholarships entry 2017-18 will open in September 2016. Scholars will be co-funded by the Woolf Institute and the Cambridge Commonwealth, European and International Trust and selected from amongst applicants in the Arts, Humanities and Social Sciences whose research must be relevant to the focus of the Woolf Institute – the multi-disciplinary study of relations between Jews, Christians and Muslims. Details can be found here.