Rodrigo Garcia-Velasco, the first awardee of the Woolf Institute Cambridge Scholarship, reflects on his first year on the PhD programme at the University of Cambridge.

I had been constantly warned that doing a PhD in the humanities could be taxing, due to the many lonely hours spent in the library, or the lack of a routine and structure. At the time of my arrival in Cambridge last September, I underestimated that getting used to the daily life of a research degree can be as hard to penetrate as some of the books and papers I regularly read, say, 'the applications of scale-free networks in early medieval European commerce'. Unlike in undergraduate and taught Masters' programmes, nobody is obliged to help you beyond your supervisor – all safety nets are gone. You aim to read and write about your subject, but there is no tutor to give you a reading list or to grade your work. There are plenty of languages you can take up and seminars you can attend, but there are no life-or-death exams at the end of the year to keep you on your toes. For historians and other humanities and social science researchers, there are no labs or offices to provide a routine and to socialise in – just the silence and the smell of books as one sits in the University Library for hours at a time. Ultimately, it is down to each individual to set their own academic bar, to build social networks with fellow PhD students, to set short-term goals, and to keep a routine.

Admittedly, this 'DIY' ethos of the PhD course took a lot of effort getting used to. But, halfway through the second term, I started to see the benefits of the system. To start with, I have been able to continue learning Arabic and Latin without the pressure of exams and at my own rhythm, sometimes driving my teachers crazy with my absences – but as I convincingly explained to them, the research trips to Spain and Portugal were a priority (particularly when they involve travelling to Madrid, Barcelona or Lisbon). Throughout the year I have been able to cherry-pick seminars and workshops, perpetuating the self-indulgent habit of fully devoting my time to all things Spanish, Mediterranean and interfaith. Besides, what could possibly be more interesting than medieval Iberia? 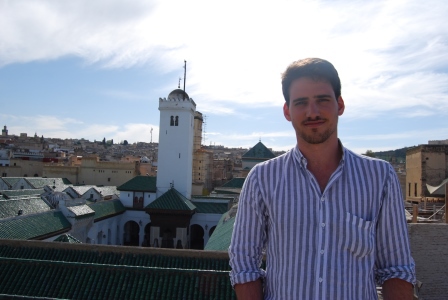 Rodrigo on the roof of al-Qarawiyyin Mosque, Fes, Morocco

Particularly rewarding have been two classes: first, the Arabic and Judaeo-Arabic lessons kindly organised by Esther-Miriam Wagner (my thesis co-supervisor), where we studied letters from the Genizah collection, such as court appeals, religious controversies of the Jewish Egyptian community, and Jewish merchant letters; and secondly, the Cambridge Graduate Migration Research Group organised with the help of CAMMIGRES (The Cambridge Migration Research Network) to discuss aspects of the history of migrants. 'My' migrants, the Jews and Muslims of medieval Spain and Portugal, were the oldest discussed by far – but being able to discuss different theoretical approaches and exchanging knowledge with other young researchers of other fields was deeply enriching and interesting. These kinds of pursuits are only possible when given the flexibility of a structure-less PhD syllabus.

Perhaps the one thing I had not envisaged was the role I would have at the Woolf Institute, after becoming their first PhD scholar (of soon to be many). It is hard to know what to expect from a place like the Woolf because its PhD programme was – and still is – in its incipient stages, especially when you come from outside Cambridge. In fact, this scholarship is very different to mainstream funding for humanities and social sciences students at the university. Whereas generally these tend to entail little contact between awarding body and recipient, the Woolf Institute Cambridge Scholarship comes with mutual responsibilities and commitments on both sides, in order to enhance each other’s goals. I have drawn the long straw in the relationship by far, being able to attend and participate in events and seminars, as well as having contact with the brilliant research fellows and students here. An important landmark of this year happened in April, when a conference organised by the Woolf Institute’s Visiting Fellow, Dr Ana Echevarría, in collaboration with Dr Nora Berend (Faculty of History, University of Cambridge) on Minorities in Contact came to fruition.

At the same time, I have formed tight bonds with the MPhil students at the Woolf and have learnt a lot from their experiences, both in the lecture room and beyond. Although their research is not directly related – most at the Institute study modern forms of Jewish-Muslim-Christian contact – it certainly has had an impact in the way I approach my subject. Throughout this year, I have therefore come to better understand the weight that my subject has not just within medieval and Mediterranean studies, but also in the modern context. After all, I focus on one of the most famous episodes of contact between the three Abrahamic peoples, which perhaps lies at the root of our present day situation, and which has acquired a politically-charged meaning in the wake of current events in the Levant and also in Europe. Moreover, I have often celebrated the positive tone and willingness to understand each other. This is part of the Woolf Institute's ethos, and is often hard to do when discussing visceral topics such as the Israel-Palestine conflict or the question of religious minorities in Europe, especially in the light of recent events in Paris. My position as PhD Scholar at the Woolf Institute has helped me to keep present-day bearings as I navigate through medieval doctoral waters.

This article is written by Rodrigo Garcia-Velasco who was awarded the Woolf Institute Cambridge Scholarship to commence his PhD studies in 2014-15. His project, which is supervised by Prof. David Abulafia, and co-supervised by Dr Esther-Miriam Wagner, focuses on the formation of frontier communities in Spain during the period of Christian expansion over the previously Muslim-dominated territories of al-Andalus, between the eleventh and thirteenth centuries.

Applications for the Woolf Institute Cambridge Scholarships will open in September 2015. Scholars will be co-funded by the Woolf Institute and the Cambridge Commonwealth, European and International Trust and selected from amongst applicants in the Arts, Humanities and Social Sciences whose research must be relevant to the focus of the Woolf Institute - the multi-disciplinary study of relations between Jews, Christians and Muslims. Details can be found here.