Mark Harris describes the outcome of his "Quest" to find the location of medieval Huntingdon's synagogue.

NEVER could I have imagined, on moving to Cambridge from London seven years previously, that on a warm and sunny Sunday afternoon in the summer of 2016 I would witness the unveiling of a plaque to commemorate the nearby town of Huntingdon's medieval synagogue and mikvah (Jewish ritual bath), the probable location of which I had been fortunate to discover during periodic researches from 2011 to 2013.

The unveiling took place at "Muttongate", a residential development of flats built by the Cambridge Housing Society and dating from 1998. Its foundation stone had been laid by former Prime Minister and Huntingdon MP John Major. The yellow-brick building (to which the plaque was affixed) stands just off St Clements Passage, a pedestrian pathway running alongside the grounds of St Mary's Church, just a stone's throw from the quieter end of the town's High Street and a short walk from the River Great Ouse and castle hill. A large number of people attended the historic occasion, mostly locals including clergymen and members of the Huntingdon & Godmanchester Civic Society, the plaque organisers, led by Richard Meredith (the "Borough Historian"); but also they came from Cambridge, including Rabbi Reuven Leigh and his family. 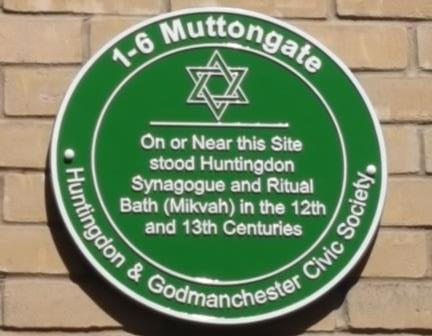 The large, round and green-coloured plaque was unveiled jointly by Jonathan Djanogly, MP for Huntingdon, and the town's Mayor, Cllr Daryl Brown.  Headed by a Magen David (Star of David), the roundel's inscribed words state that, "On or near this site stood Huntingdon Synagogue and Ritual Bath (Mikvah) in the 12th and 13th centuries."  Rabbi Leigh, Director of Cambridge Chabad and Founder-Director of the Cambridge Lehrhaus: Centre for Jewish Thought, spoke about the mikvah and the medieval Jewish philosopher, Maimonides' standpoint that, "by using it, one immerses in the pure waters of knowledge".

At the ceremony's conclusion, the Mayor invited all present to join him for a reception in the 18th century Town Hall.  During his speech in the grand Assembly Room, Mr Djanogly said that the plaque was "also a memorial to the need for toleration, and for strong cultural links between the different peoples of our country".  My own talk first echoed the thought that the plaque "is not only a symbol of remembrance, but also one of reconciliation, cooperation and friendship".  Clearly, my address could not cover the mass of detail contained in the 2013 report of my Quest's research findings, comparative studies and conclusions, which had formed the basis of a plaque application by Mr Djanogly.  It was amazing for me to recall that, five years before, I had met with the MP in the town's riverside Bridge Hotel.  At the time, he had mentioned briefly the recorded existence of a synagogue in medieval Huntingdon, and which had been destroyed in the late 1280s (not long prior to the expulsion of Jews from England by Edward I in 1290).  I took his passing reference as an implicit challenge; and the rest is, literally, history! 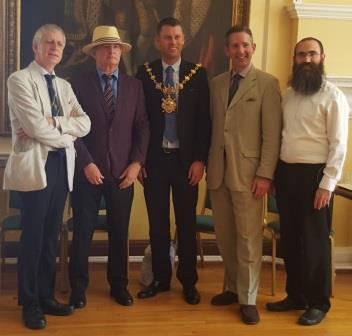 So it was not I who had discovered the former presence of the medieval synagogue.  Others more knowledgeable of the town's history had known of it.  And archaeologists had found certain artefacts underground, within what I had alluded to (in the 2013 report) as my "target area".  My contribution was largely interpretative, by seeking to detect the meaning and relevance of such unidentified discoveries. This process would have applied, for example, to the subterranean wooden tub that all the evidence indicated to me was a mikvah; and which likely had been associated physically with the synagogue. That circumstantial evidence was deployed principally in an official 1999 report on a requisite archaeological excavation adjoining St Clements Passage, and ahead of the "Muttongate" housing development.

In local and other archives, libraries and museums, I had perused many medieval documents of various origins and kinds; but I noted especially the lack of contemporaneous charts and maps of Huntingdon.  And the Historical Environment Team (of archaeologists), based in Cambridge's Shire Hall, provided for my examination numerous artefacts and associated finds from different digs in the town.  From within my fairly compact "target area" there was a considerable amount of medieval pottery fragments to inspect. As well as a single and hefty stone brick from, it had been deduced, a nearby wall (which, I believe, could have been of the synagogue; and perhaps the only one missed, and not transported for valuable use elsewhere, after the building was gutted).  Also there was an unusually complete medieval pitcher that I considered could have been utilised for ritual bathing purposes. Particularly significant was the substantial quantity of sheep, in comparison to pig, bones discovered in the vicinity and dating from the pertinent period.

My discourse closed with a special expression of gratitude to Dr Sharman Kadish. She is the Founder-Director of Jewish Heritage UK, based in Manchester and the only organisation in this country with the specific task of safeguarding the built heritage of British Jewry. Having kindly agreed to read my proposed report back in 2013, Dr Kadish (who has written scholarly works on the history of the Jews, and of the mikvah, in Britain) felt able to give some very positive feedback on my findings and conclusions.

During my Quest, I would stroll to and fro along St Clements Passage, formerly "Mutton Alley" (as confirmed in renowned mapmaker Speed's town chart of 1610); and I would often sense around me the spirit of medieval Huntingdon's Jewish community. Most of the original families had likely settled in England from France after the Norman Conquest. And, intriguingly, I felt that I was getting to know a few of the principal characters in the story, like Josce or rather Josceus (a scion of a successful and prominent Jewish dynasty in medieval England).

Josce had been resident in Cambridge until the expulsion of its Jewish community to Huntingdon by Queen Eleanor (mother of Edward I) in 1275; Cambridge was her dower town. Evidently, he was much respected by the combined communities; and, apparently, also by the Huntingdon authorities.  Fortuitously, I discovered that Josce's family name was "Mutun" (often rendered as "Muton").  After this, I considered that "Mutton Alley" (which, it had been generally suggested, was a back-reference to the medieval town's Jews being called "Mutton eaters") was more likely named for him.

This article is written by Mark Harris who is a lawyer (retired); he was a Chief Legal Adviser in Whitehall, advising Ministers and administrators, and drafting legislation, in the field of Labour Law.  He is also a journalist, volunteer Deputy Editor of the Essex Jewish News and a published author and novelist.