Minorities in Contact
A conference on the history of interfaith relations 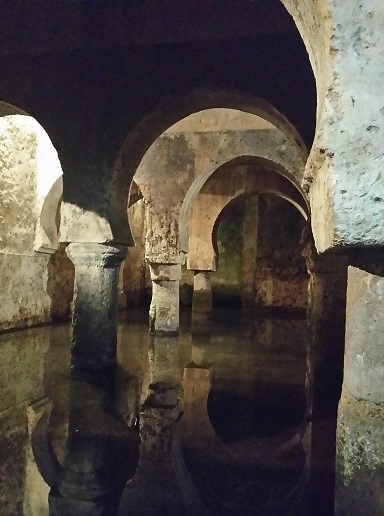 How do we define religious minorities and how do these groups define their identity with regard to each other, as well as to majority religious communities? These were the issues discussed at the Conference Minorities in Contact, held at St. Catharine's College on 23-24 April 2015. Comparative history of religious minorities is becoming more and more necessary for an understanding of the mechanisms of their definition and self-identity creation. Fifteen academics from six different countries met their colleagues in Cambridge in order to attempt to change the focus, from the usual study of relations between minority and majority, to a more horizontal minority-minority approach. The meeting was organized by Drs Nora Berend (Cambridge), Esther-Miriam Wagner (Woolf Institute) and Ana Echevarria (UNED, Spain and Visiting Fellow, Woolf Institute), with help from the Woolf Institute, the Trevelyan Fund (Department of History, University of Cambridge), and the Project Mudéjares y Moriscos de Castilla, (Spanish Ministry of Economy-UNED).

One of the relevant questions is quantitative, namely whether the number defines a religious minority. Historical examples from Egypt, Spain and Sicily show that minorities were in some periods significant in number, to the point that they constituted 'symbolic' minorities, rather than numerical ones. Dr Annliese Nef (Université Paris-Sorbonne) consequently questioned the use of the term 'minority' to define these groups. After the discussion, the word was shown to carry enough content so as to justify keeping it for the moment.

The difference between ruling a majority or a minority of another faith explains laws, political approaches and ways of organizing different polities, and is reflected in the self-confidence of minorities when negotiating their boundaries, both within them and with the majority culture, as happened in the Fatimid caliphate, or in Norman Sicily. On the other hand, clashes in the interpretation of a certain faith may also create tension between religious groups, in a context where members of the same religion who did not submit were treated as minorities, like in the Almohad polity, as shown by Dr Amira Bennison (Cambridge).

An effort was also made to set the interaction of minority communities in a broader perspective, within the different scales of polities in which they were inscribed: from imperial constructions such as Byzantium, the Almohad caliphate, the German Empire, the Ottomans and the Mongols; to monarchies "in the borders" like Castile, Hungary, Aragon or Sicily; or Islamic dynasties as Andalusi rulers, Almoravids and Mamluks. Do minorities in the same period or place, and under the same majority power, react in the same way to duress or similar pressures exercised on them? Do these conditions come from a clash between the minorities or between one minority and the majority?

Interreligious dialogue and debate throws a great deal of light into intellectual debate, so a full section of the conference was devoted to this subject. Often the writings of a minority were dictated by the current debates or polemics sustained with another minority, as shown by Dr Zvi Stampfer, working at the Taylor-Schechter Genizah Unit. In some of the cases, attitudes to language and acculturation resulted in particular choices made in the adaption of a certain language or script in reaction to that of others, like the Judaeo-Arabic used by most Jews living in Islamic lands, or the Aljamiado writing of Mudejars and Moriscos in Spain, studied by Dr María Angeles Gallego (CSIC, Spain) and Mònica Colominas (University of Amsterdam).

Other questions were related to new sources for the study of relations between Jews, Muslims, and Christians who lived as minorities under rulers of different faiths, or the same faith but distinct sects. The advances in the discovery of new material in the past years, and the improvement of research conditions due to European Research Projects are helping to identify a great number of new sources in this respect, that still need to be studied, such as the ones presented by Prof Alexandra Cuffel (Ruhr University, Germany), Dr Barbara Roggema (King's College, London), Dr Clara Almagro, Dr Tamar Boyadjian (Michigan State University) and Prof Johannes Pahlitzsch (University of Mainz). How to train young scholars in the languages needed for these studies is another issue addressed during the informal talks that followed the conference.

As a result of this two-day conference, a volume will be edited with all these contributions, hoping to establish a new theoretical framework to the dealings of Jews, Muslims and Christians in their roles as minorities.

This article was written by Ana Echevarria, Reader of Medieval History at the Universidad Nacional de Educación a Distancia (Spain). Ana organised the conference Minorities in Contact whilst holding a Visiting Fellowship at the Woolf Institute. For details of the Visiting Fellowship, see here.