Minorities and Popular Culture in the Modern Middle East (2)

Cambridge MPhil student Özgecan Atasoy reflects on the recent workshop organised by the Woolf Institute and the SOAS Centre for Cultural Literary and Postcolonial Studies. 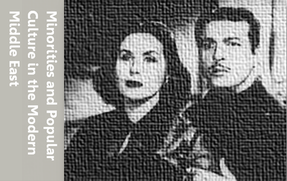 As an MPhil student from University of Cambridge, I had the opportunity to participate during the first day of the conference. Signing up for the conference a couple of weeks earlier, I was worried about listening to intense research projects on some of the countries I have studied before.

The speakers list included a large variety of scholars with different foci and academic backgrounds. The schedule was grouped into four main panels: Transformation and Agency, led by Hanan Hammad; Diaspora and Transnationalism, led by Esther-Miriam Wagner; Representation and Image, led by Karima Laachir and Gender and the Nation, led by Shana Cohen. The audience had the chance to learn and discuss about different countries of the Modern Middle East, through enchanting lenses.

The first panel on agency and transformation stirred a lively debate on the concepts of victim, survivor and minority as works on Berber protest music in Morocco, Mizrahim community in Israel, Copts in Egypt, ethnic minority filmmakers in Iran and, political opening and music in Libya were presented. Concepts of visibility and audibility of political transformation and different identities were emphasised themes of the discussion section. In addition to Iran and North Africa, Turkey was one of the countries in the second panel on Diasporas. Minority identities in popular culture and the importance of nostalgic and emotional ties in identity formation were the main topics discussed in this panel. The speakers of the third panel examined the representation of different minorities in popular culture, presenting cases on Ottoman Empire, Turkey, Egypt and Tunisia. The construction of the image of the other was the highlight of the debates afterwards. The final panel focused on the gender aspect of representation of minorities in the region. Speakers presented highly interesting cases on Turkey and Egypt, and the discussion revealed different aspects of especially patriarchy and nationalism.

As an MPhil student, who has just recently finished a dissertation on the Turkish Jewish community of Turkey and their sustainability strategies, I have found this conference highly interesting and intellectually stimulating. Not only did this conference help me meet these scholars in person but also allowed me to create new research questions for further studies.

Listening to different aspects of minority life in the Modern Middle East and the historically significant events and figures of the region raised my spirit and gave me hope. A region, granted with its problems, has housed a remarkable diversity and richness. Witnessing these contemporary works and listening to the anecdotes of the speakers, I couldn't help but feel hopeful about the future of the region and the status of minorities. The minority life in the Middle East is, without a doubt, still facing difficulties, and the problems do not seem to vanish anytime soon. Yet the sincere effort of the scholars from different parts of the world, to represent, to demonstrate and to further discuss the possibility of a more pro-dialogue future cannot be ignored. As one of the speakers, Yehuda Sharim, of Rice University, has stated in his speech: "These minority groups deserve to be recognised with their efforts to exist. I refuse to label them solely as victims, they are survivors". As more researchers start focusing on the region with the aim of capturing this interactive human quality, which makes this region unique, I believe the chances for a pro-dialogue future will increase.

This article is written by Özgecan Atasoy who holds BA degrees in International Relations and Sociology from Koç University, İstanbul. After working two years as a research assistant on post-Soviet urbanisation, she continued her academic studies at the University of Cambridge, in the MPhil programme, Modern Society and Global Transformations. She has recently completed her dissertation on minority communities and their sustainability strategies, with a focus on Turkish Jewish community.