Belief, Religion, Commission On Religion And Belief In British Public Life, Faith Schools, Living With Difference, RE Council Of England And Wales, Thought For The Day

Dr Ed Kessler reflects on some of the controversy surrounding 'Living with Difference': the report of the Commission on Religion and Belief in British Public Life. 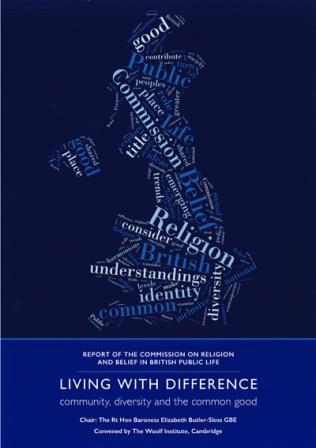 Front cover of Living with Difference: Report of the Commission on Religion and Belief in British Public Life

I start with a confession - although one critic's description of the Commission's report as 'a product of the Thought for the Day school of theological discourse' was meant as an insult, I took it as a compliment. For many BBC Radio 4 listeners, a highlight of the morning is not listening to  John Humphries' cajoling politicians to answer a question he's asked (rather than the question they wish he had asked) but rather, Thought for the Day.

And it's called Thought for the day (rather than Prayer for the Day, which is broadcast at the rather ungodly hour of 5.43am) for a reason. Since it consists of a thought, why shouldn't humanists or anyone from an ethical rather religious tradition share an insightful thought with the Today listener?

Extending TFTD is one of our (minor) recommendations. The report itself has generated much more public debate about the place of religion and belief than any report that has come out of Lambeth Palace or Westminster Cathedral in recent years (or the Chief Rabbi's Office for that matter). And that's the point.

British society has changed – we are less Christian, less religious and more diverse than we have ever been. Some surveys suggest that nearly 50% of us don't believe in God (I'm not one of them) and according to the evangelical Anglican priest Angus Ritchie, one of the Commissioners, the Church needs to "stop clinging by its fingertips to privileges which are no longer appropriate".

Our report, Living with Difference, also calls for the end of collective worship, which The Times Leader commended. Since most schools don’t provide Collective Worship (breaking the law in the process) we suggest something, which schools will implement and which will benefit pupils – inclusive reflection, successfully practiced by Scottish schools with the support of the Church and the Scottish Humanist Society. It is this sort of collaboration that the report commends and recommends, (and before my critics jump onto their soapbox, there was only one Humanist among 20 Commissioners and he was outnumbered by 9 (practicing) Christians and numerous other religious people).

What also seems to have caused annoyance is our desire for faith schools to be more pluralist. This isn't a call for the abolition of faith schools, which is sought by Humanists and the National Secular Society (the latter accused the Commission of being too religious). In fact, we acknowledge that many faith schools are excellent.

However, there are some schools, which are wholly dominated by one Christian denomination or by one religion in which the children do not have a chance to learn about difference, let alone live with difference. I suspect that's one reason why the RE Council of England and Wales welcomed our report because it "celebrates the role that religious education plays in preparing pupils for life in Modern Britain". In fact, the Commission called for religious literacy and education to be accorded the same status as other humanities subjects.

Whilst the commissioners recognised both the immense value of many faith schools and that selection plays an important role in maintaining their ethos, a reduction in selection on religious grounds should take place where possible. And critics who want to challenge the evidence – all they need to do is read the report. One benefit of including academic Commissioners is that there are a great number of footnotes and references justifying these recommendations. Stating, as one critic did, that 'I will leave it to others to comment on the substance of the report' is not good enough. I tell my students in Cambridge: 'before you disagree with an argument, you'd better demonstrate that you understand it first'.

Let me give one example. The Cantle Report was commissioned by the Home Office after the 2001 race riots in the northern cities. The report noted how riots had not arisen in diverse areas, such as Southall and Leicester, where pupils learnt about different religions and cultures in local schools. It also expressed concern that some schools appeared to be 'operating discriminatory policies where religious affiliations protect cultural and ethnic divisions'.

That's why learning to understand and live with differences is the recurring theme throughout our report. And the challenge for policy-makers is to create an environment in which differences enrich society rather than cause anxiety, and in which they contribute to its common good. This in turn requires that all communities feel a positive part of an ongoing national story - what it means to be British is not fixed and final, for people in the past understood the concept differently from the way it is seen today. That's one reason why we have proposed creating a grassroots Magna Carta style statement of religion and belief values for public life, rather than a government-led approach to defining British values

The pattern of religious affiliation has changed and continues to change. Policymakers and politicians need to catch up with events, to enhance their capacity to read a most potent sign of our times – religion and belief.

Dr Ed Kessler MBE is Vice Chair of the Commission on Religion and Belief in British Public Life, Founder Director of the Woolf Institute and Fellow, St Edmund's College, Cambridge.