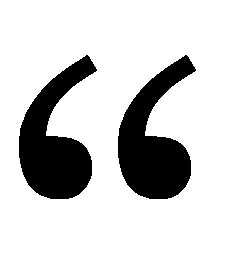 Language provides us with identity. The way we speak gives clues to our age, our social standing, and our educational background. Most of us are able to talk in a variety of codes, not only in different languages, but also in speech registers that are particularly attuned to the respective listeners. We communicate very differently with a child, with an elderly relative, or with a colleague. Our language changes when we address an official group, a professional superior, or if we chat among a tight-knit circle of friends.

Within closely defined social groups, very specific language forms may develop. An often voiced complaint among the older generations throughout the ages is their inability to understand words and phrases with which adolescents communicate. Mumsnet currently contains a thread of 250 definitions of teenage slang, with parents offering wry, although perhaps not always accurate 'translations' of words like "dench" or "peng". Not only younger and older individuals may be separated by a speech barrier; in many languages of the world, distinct variations can be found in the way members of different religious communities speak. In this context, language may reinforce religious boundaries and provide the speakers with an additional sense of belonging and group identity. The variation in the speech of Protestant and Catholic communities in Ireland may be such an example, although there is still much debate whether these religious differences really exist.

Much clearer examples come from the Middle East where in many areas members of the three Abrahamic faiths have lived closely together for over 1300 years. Famous are the communal dialects of Baghdad, where Jews and Christians spoke within their communities an old urban dialect going back to the early Islamic period, whereas the Muslim community would speak a newer, rural variety, introduced by bedouins whose language enjoyed high prestige among Muslims. At the same time, members of the various communities would communicate with one another in a linguistically levelled koine, a common language used for inter-communal communication.

The phenomenon of linguistic separation between religious communities is not limited to oral communication, they may choose to write in very distinct ways, too. A notorious modern example is Serbo-Croatian, where the religious separation between peoples is buttressed by different use of alphabets for what is essentially the same language: Cyrillic script by Serbian Orthodox Christians, and Latin script by Croatian Catholics.

In the Middle East we find that Jewish language forms in particular are separated from those of the other faith communities because Jews wrote Arabic not in the Arabic alphabet as their Muslim and Christian compatriots did, but in Hebrew, the language in which they were schooled. This so-called Judaeo-Arabic is the language on which I focus my research. Most of the material I investigate comes from a most exciting source of medieval and early modern Judaeo-Arabic texts − the Cairo Genizah. 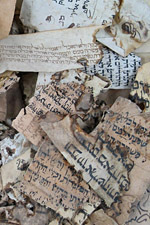 What we call the Cairo Genizah are the contents of a storeroom in the Ben Ezra synagogue in Old Cairo. In this storeroom, manuscripts were deposited because Jews follow the religious commandment that any piece of paper or parchment containing the name of God cannot be destroyed, thrown away or burnt but must be stored away or buried. For this purpose, almost every synagogue has a Genizah where materials are stored for a while before they are ritually buried. The Genizah in Old Cairo, however, was very special because it was never emptied. Instead, Egyptian Jews deposited anything they wrote into the Genizah chamber, because the name of God would appear on almost every piece of writing, in the formula 'in the name of God the merciful'. Manuscripts date from the 7th to the 19th century, and hundreds of thousands of leaves of documents and literary texts were preserved in this giant 'waste paper basket'.

My Research Fellowship in the Woolf Institute allows me to explore Muslim-Jewish Relations through the linguistic looking glass. I analyse, for example, how Jews wrote in Fatimid Egypt under a relatively tolerant Shiite regime, where there was an affluent Jewish Middle class, and contrast this with the language used by Jews under the more restrictive Sunni Ayyubids, or under pluralistic Ottoman rule. Not only time makes for change: distinct differences can also be discerned between the language used in letters composed by secular merchants and in the correspondence written by religious dignitaries. 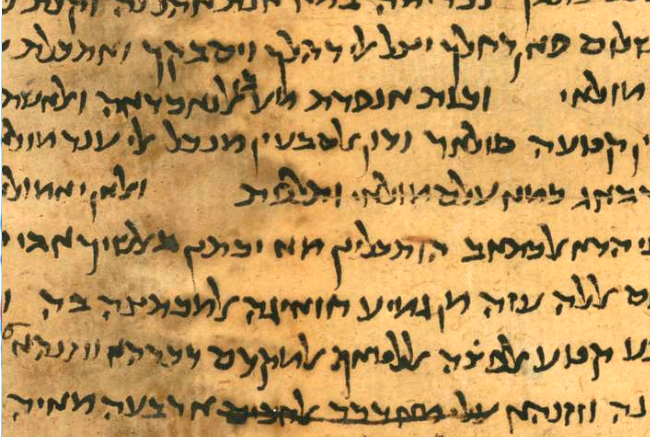 An additional layer is provided by the social and religious identity of the addressees of the correspondence. When writing to someone of much higher rank, in particular in begging letters, words and phrases perceived as very 'Jewish' might be used to invoke common ground between writer and recipient in order to gain favour. Traders of equal social standing might choose to communicate in the same language they would use for writing to their Muslim business partners, the identity as merchants and the common market language being more important to the correspondents than language forms referring to the shared Jewish background. Addresses would be written in Arabic and not Hebrew script to facilitate delivery by Muslim messengers.

What fascinates me in the Genizah sources is how they enable us not only to understand the sectarian differences in language but also those language forms that allow people to communicate on common ground across religious boundaries. Seeing how people navigated linguistic diversity gives me hope for the future: Living together was the rule, not the exception.

This article is by Dr Esther-Miriam Wagner who is a Senior Research Fellow at the Woolf Institute. Her main research interests include Judaeo-Arabic, sociolinguistics, Yiddish, and Jewish-Muslim relations in Egypt and Muslim Spain as reflected in the Genizah sources. Prior to joining the Woolf Miriam was a Research Associate at the Taylor-Schechter Genizah Unit, Cambridge University Library and has completed a doctorate on Judaeo-Arabic letters at the University of Cambridge.