Jessica Tearney-Pearce reflects on a recent visit to a basilica in France where Muslim pilgrims and pilgrims of multiple Christian denominations are welcomed daily. 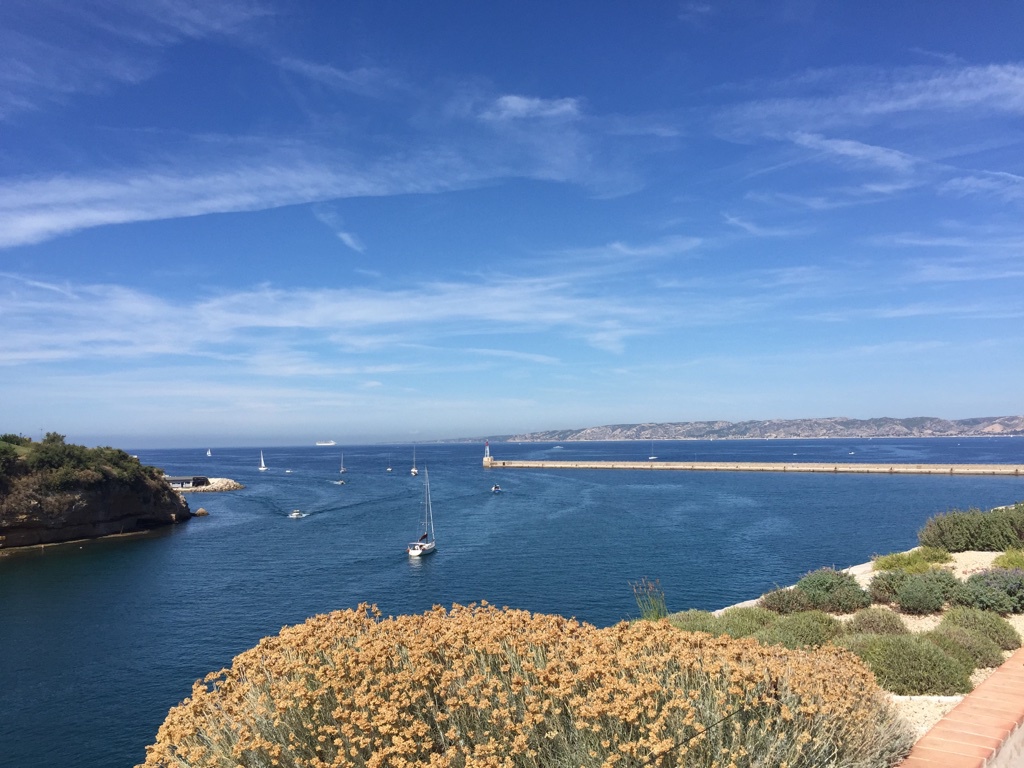 The entrance to the harbour at Marseille

In 1254, the French king Louis IX sailed from Acre to his own port city Aigues-Mortes, 70 miles east of Marseille. After leaving Cyprus a violent tempest arose which threatened to dash the vessel against the rocks. Louis' biographer Jean de Joinville encouraged the queen, Margaret, to vow to dedicate a boat to the shrine of Nicholas at Varangeville after their return if this saint would save them from their predicament. Jean himself promised that he would make the pilgrimage to deliver this votive offering should the saint intervene to abate the storm. The queen agreed, the storm eased, and Jean described the intricate silver boat which he duly walked to the shrine in the north-east of Louis' realm (Jean de Joinville, Histoire de Saint Louis, V).

The tradition of depositing ex-votos (offerings given in fulfilment of a vow; literally 'out from a vow') at places of worship in thanksgiving is an ancient human custom which both pre-dates the advent of the three major monotheisms and is perpetuated by adherents of them. I recently visited a sanctuary which houses and receives many such ex-voto objects, most of them connected to maritime activities. Notre-Dame de la Garde in Marseille is a modern manifestation of the two themes at the heart of the research I undertake with a focus on late antiquity and the middle ages: religion related to the sea; and interfaith encounters, particularly at mutually significant holy sites.

40 years before Louis' voyage, 1214 was an important year in the lands that became modern France. Not only did it greet the birth of Louis himself, it also saw his grandfather, Philippe II 'Auguste' defeat the three-pronged attack waged by Holy Roman Emperor Otto III and England's King John; a victory which confirmed the monarch of the Île de France in his possession of some the continental lands previously held by England. Contemporaneously, and much more quietly, in the south-western port of Marseille, a local priest named Pierre built a small shrine dedicated to the Virgin at the summit of the town’s highest coastal peak, 'La Garde'. 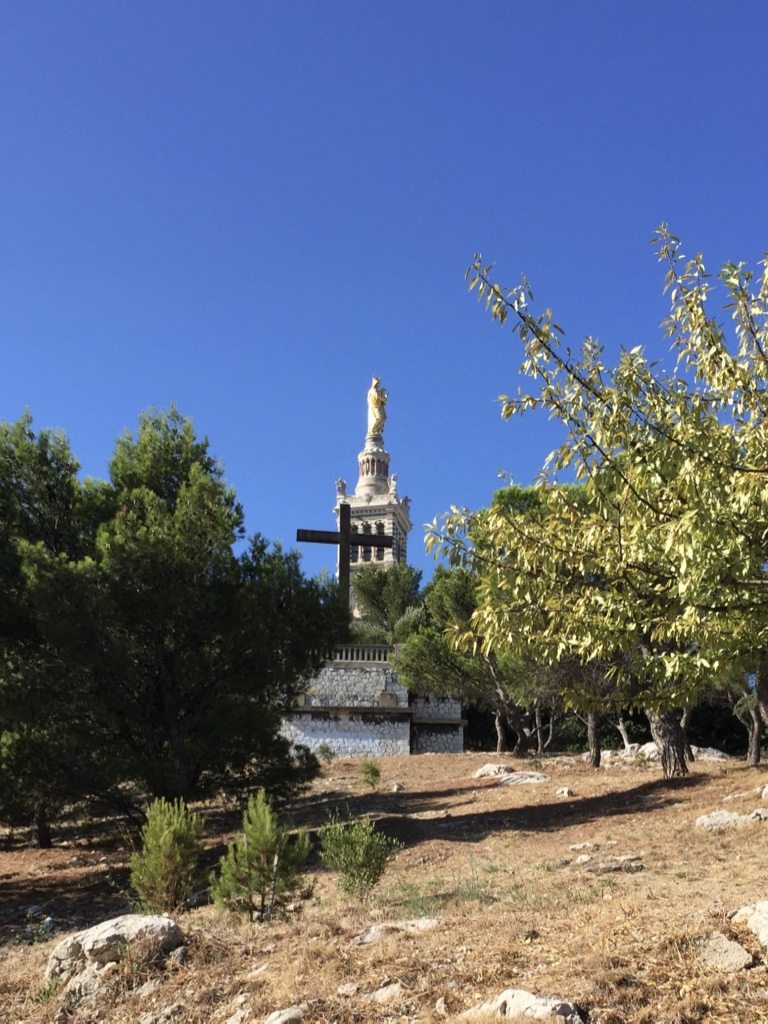 The shrine and sanctuary of Notre-Dame de la Garde expanded over the centuries, and rode the waves of France's rocky military and religious history with her. After defeating sieges by the Holy Roman Emperor Charles V in the early 16th century, François I ordered the construction of a fortress around the shrine as its defensive location was vital to the security of the port. However, the site remained a centre of worship as, unusually, the chapel itself was open to local Christians and visiting pilgrims in peace-time. During the French Revolution, Notre-Dame de la Garde was stripped of all adornment and votives, and members of the Bourbon royal family were incarcerated within. Following the Revolution, the sanctuary began to attract visitors again and in the mid-19th century the extant Romano-Byzantine basilica was constructed. Although France's troubled past resulted in the destruction of the pre-modern objects dedicated to the church here, records of their existence remain, and the multiplicity of 19th- and 20th-century ex-votos are a major feature of the decoration of the sanctuary, with many also displayed in the on-site museum. The basilica continues to attract streams of pilgrims, including many sailors who upon arrival at the port, come to offer their thanksgiving and ex-voto gifts to Notre-Dame. 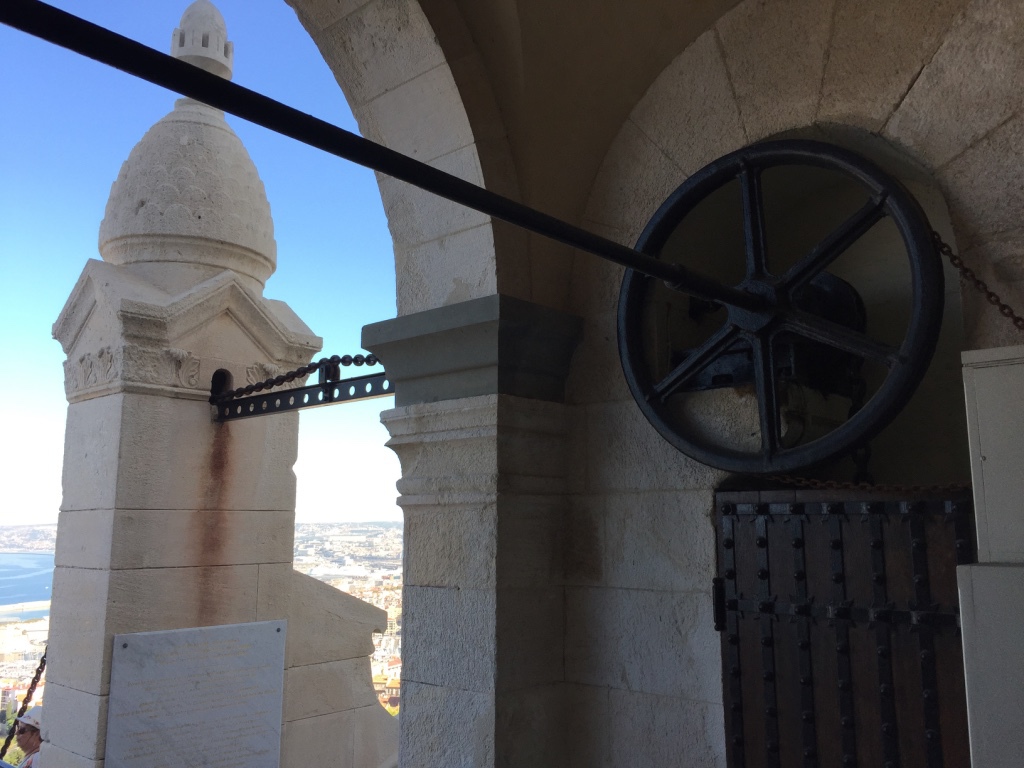 Although the basilica itself and its decorations are modern, they remain true to the history of the site and its location. A drawbridge is opened every morning and closed every evening and the modern bell-tower mimics the 16th-century defensively-minded column at François' fort. The interior decoration also reflects the importance of Marseille as a seaport, which dates back to the Greek settlement of Massilia and persists today with a steady stream of fishing boats and cruise ships. In addition to the ex-voto models and paintings of boats, beautiful mosaics adorn the nave. Inspired by 5th- and 6th-century decorations in Ravenna and Rome, they have as their focal point in the apse above the high altar, a mosaic depicting the church as a Greek-style ship with the insignia of Mary on the sail. Even the columns recall the maritime heritage of the city, with each having a bow and a stern protruding on either side. 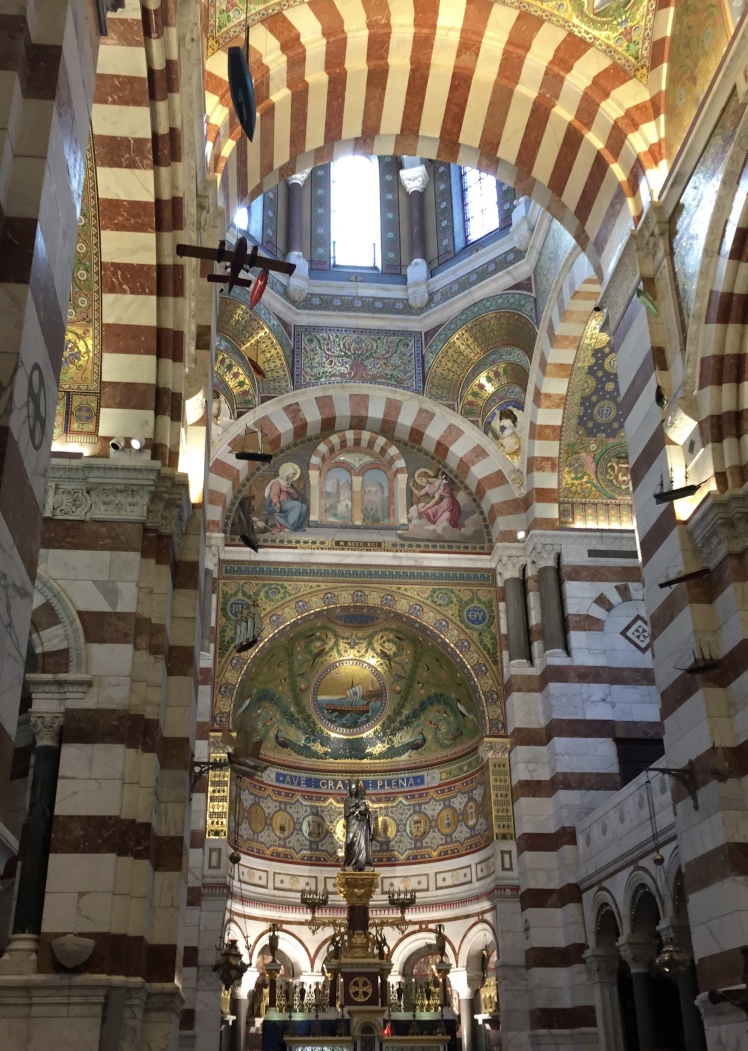 Today the piety of Pierre's foundation of the shrine on this site is promoted at the basilica. This sanctuary was established not as the result of a miracle or a vision, but rather the devotion of one medieval man, and this humble origin is reiterated not only in the 17th- and 18th-century documents which delineate the calendar of services and the duties of the church-wardens, but also in brochures in the gift shop and signs in the museum. Across the ages seaports have been spaces where cross-cultural and interfaith contact is regular and, in fact, normal. It struck me that the modern publicity material and information at the basilica emphasises the cosmopolitan features of the building itself with the Romano-Byzantine style being specifically identified as a manifestation of the meeting of East and West. 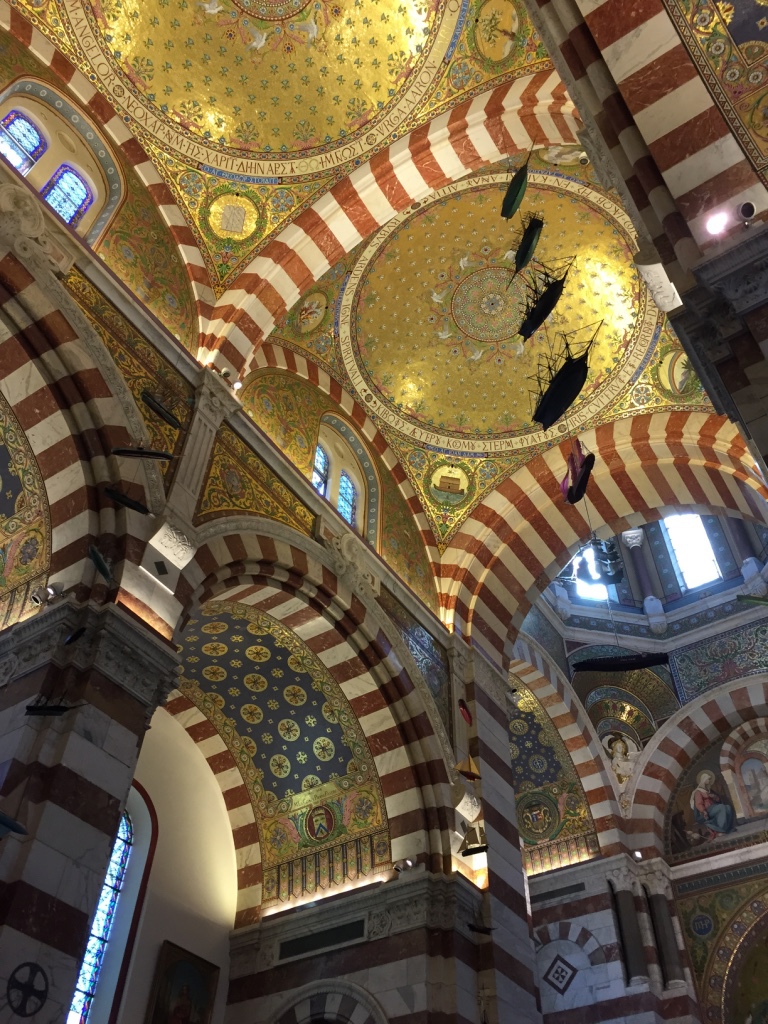 Another feature of the daily life of this basilica which visitors cannot miss and which is indicated in much informational material is that, like Notre-Dame de la Afrique in Algiers, Notre-Dame de la Garde is the destination of both Christian and Muslim pilgrims dedicated to the Virgin. This diversity of pilgrims and visitors is embraced. The importance of Mary for Muslims is announced in both brochures at the basilica and even on a large plaque in the museum. This plaque explains the appearances of Mary in the Qur'an and reminds readers of the announcement by Pope Paul IV in his Nostra Aetate declaration that the Church esteems Muslims who 'honour Mary, and sometimes call on her with devotion'. 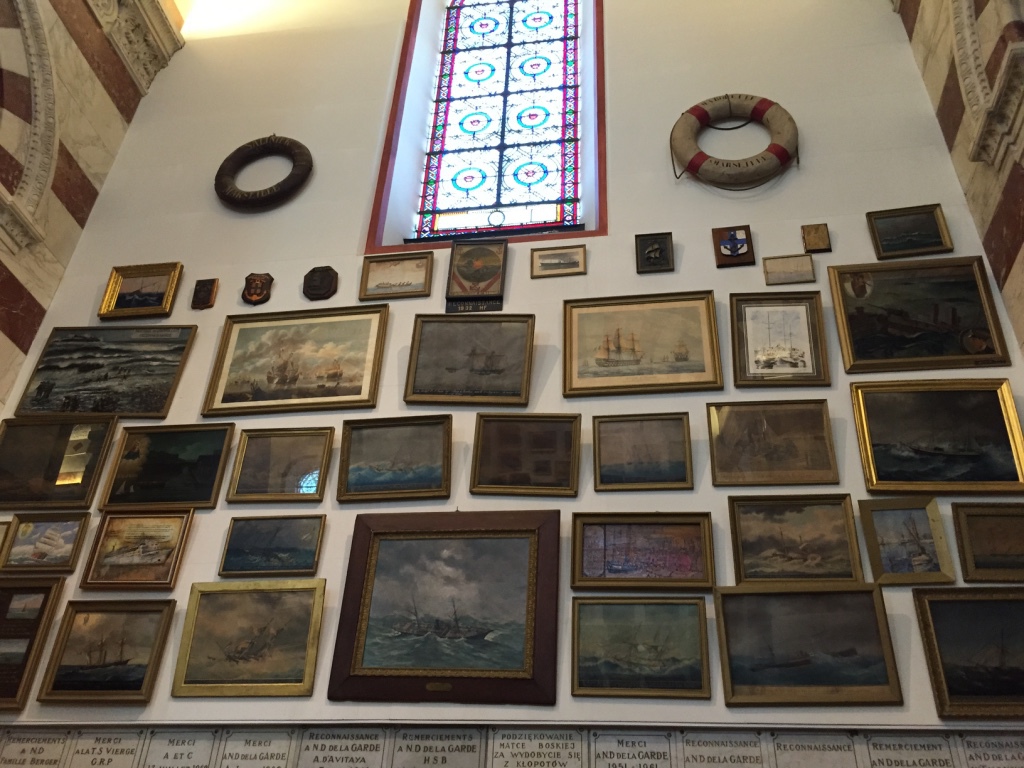 Coincidentally, I was in Marseille to visit an excellent exhibition at the city's new MUCEM. This exhibition, Lieux Saints Partagés – which has now left Marseille but will appear in other cities in Europe in the months and years to come – examines the links between adherents of the monotheistic religions, particularly in the present, but also in the past. It should be noted that it is not the aim of this exhibition, nor my aim in my own research, to simplistically – or anachronistically – insinuate that saints and ideas/beliefs which are shared by adherents of different religions are identical. Nevertheless, it recognises that dedication to the same objects of worship connects people and – as the example of traders also attests – it is at this popular level both in the past and the present that understanding and tolerance can exist to the greatest extent.

There are records of a model of the Virgin and Child being present at the sanctuary of La Garde since its early years. Between the 17th and 19th centuries, the statue was paraded around the city annually on the feast of Corpus Christi, and at times of strife, particularly during plagues. The almost 10m high statue which now surmounts the bell tower, is contemporary with the building. Although the annual parades ceased, she too experienced her own procession – at sea in fact – in 1931 in honour of her coronation. Today, she glitters in the sunlight and the moonlight, watching over those travelling the seas as a literal exposition of the name by which locals affectionately refer to the basilica: 'La Bonne Mère'. 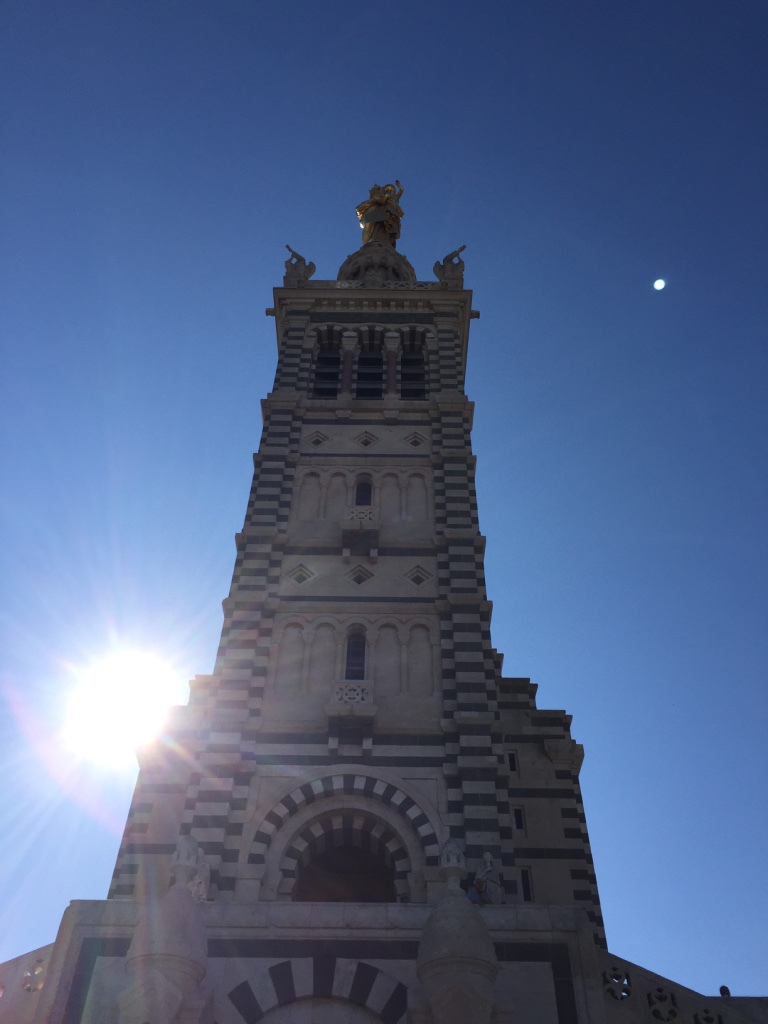 The bell-tower topped with statue of Notre-Dame, with the sun and the moon in the background

This article is written by Jessica Tearney-Pearce who is a member of the Development Team at the Woolf Institute. Her research focuses on inter-cultural and inter-religious communication and the sharing of practices, spaces, and ideas in the pre-modern Mediterranean (c.300–c.1600), and her current project examines religion and travel at sea.

Jessica would like to extend her gratitude to Professor Dionigi Albera for his hospitality and expert tour-guiding in Marseille.