Jerusalem is the focus of attention around the world. Last month's convergence of Passover, Ramadan and Easter was a reminder that it's also a focus of contention, nurtured by radicals and activists who exploit the religious calendars and periods of tension. Jerusalem's significance for Jews, Christians Muslims is derived primarily from a cocktail of religion, history and politics. It is central to national, religious, and political discourse, at the heart of the Israeli-Palestinian conflict and crucial to its resolution. Strange, is it not, that the two sides held substantive talks about Jerusalem on only two occasions: 2000/01 between Ehud Barak and Yasser Arafat, and in 2008 between Ehud Olmert and Mahmoud Abbas. On both occasions, agreement was close.

We are sometimes told that religious differences are indivisible and non-negotiable; almost impossible to solve or to find a compromise. The anticipated benefits of postponing the most difficult issue to a later stage is that it would prevent negotiations from collapsing and allow time to build trust. It failed to achieve either.

Yet, the gaps between conflicting positions on Jerusalem have diminished and understandings have begun to take shape and creative ideas for bridging differences have emerged. Key to this is taking advantage of outbursts of peace and of good leadership, both of which allow time for a shift from slogan and myth to practical and pragmatic discussion, from condemnation of the Other to a joint pursuit for solutions.

Discussion about Jerusalem should be first, not last, on the agenda.

The 'Status Quo' was originally established in response to arguments between Christian communities who shared the Church of the Holy Sepulchre but couldn't agree how it should be managed. Quarrels had been so intense that in 1757 the Sultan imposed a law that no one was allowed to change the structure, furnishings and decoration of the Church. From that point on, the position of authorities to 'freeze the Status Quo' developed as a means of preventing discord. However, there was a catch. Because it was vague, ambiguous and unwritten, those who held political power at any one moment could discriminate against those who held a weaker position. The Status Quo is, in essence, the prevailing situation at any particular time.

With the arrival of the British in 1917, it was applied to other holy places, notably al-Aqsa, and its provisions were adopted by the Jordanians when they ruled the Old City from 1948-67. Since then Israel has been the sovereign power but al-Aqsa is managed by Israeli-Jordanian cooperation, the only place where the Hashemites retain a formal role and where Jerusalem Palestinians can organise with relative autonomy, since management of the site is left in the hands of the Waqf.

An important feature of the Status Quo was the ban issued in 1967 by the chief Rabbinate (and majority of rabbinical authorities) prohibiting Jews from entering the Temple Mount.

The post 1967 Status Quo continued relatively calmly for 30 years and Jerusalem police officers and the Waqf pursued a policy of "live and let live". Quiet conversations and tacit agreements were the preferred choice.

This began to change after 1996 in the wake of confrontation over the opening a northern exit to the Western Wall tunnels and the visit of Ariel Sharon in 2000 which sparked the Second Intifada. In the last decade, the most significant development is an intensification of the connection to the Temple Mount among religious Jews which has led to a growing number of Orthodox rabbis to encourage religious pilgrimage so long as they visit with a guide who knows which parts of the site were permitted. National sentiment has also begun to play a more important role. Meanwhile, the "al-Aqsa is in danger" campaign has grown in response, sometimes merging into a broader campaign against Israeli occupation of Palestinian land, increasing the danger of local violence sparking wider conflagration, as happened in May 2021 when communal fighting occurred throughout the state of Israel.

Yet, there have also been moments of closer cooperation such as in 2001 when the southern wall of al-Aqsa developed a bulge and concern was expressed by engineers about its possible collapse. The Israeli prime minister at the time, Ariel Sharon, quickly transferred responsibility for implementing repairs to Jordan which oversaw renovations.

The Status Quo presents the challenge of maintaining a delicate balance between contesting parties and every change, perceived or real, is a potential spark for violence on the part of the wounded partner and a catalyst for counterreaction. The Status Quo needs immediate support and that unilateral action, without consensus, should be avoided.

When I visited the region in February, widespread concern was being expressed that April's convergence of Ramadan, Passover and Easter would result in a series of violent incidents at Al-Aqsa and elsewhere. It did. In that month, 47 Palestinian and 3 Israelis died – many hundreds were injured. More religious Jews than ever visited the Temple Mount, over 700 on a single day. Young Palestinians, in particular, were determined to prevent groups of religious Jews, protected by the Israeli police, from touring the area and defended al-Aqsa.

The events of April showed that leadership from each side had domestic pressures to face: for Jordan, to be seen standing up to Israel and protecting al-Aqsa; for Israel, to demonstrate control and sovereignty of the Temple Mount; for Palestinians, to be seen to be standing up to both. No less pressing was the need for calm on the ground. Everyone was forced to balance competing interests. The events of April are only one link in the chain, which over recent years have eroded the Status Quo and undermined the prospects of peace.

You may breathe a sigh of relief thinking that Ramadan, Easter and Passover will not converge for a long time. Think again! In April 2023, less than a year away, the three festivals will, once again, cross paths. Time is pressing.

On Thursday 19 May 2022 - 18:30 – 20:00 IST, Dr Kessler will be speaking on Jerusalem's Holy Places: sustaining, safeguarding, and respecting. The event is organised by the School of Religion, Theology, and Peace Studies - Trinity College Dublin and Supported by the Trinity Long Room Hub. 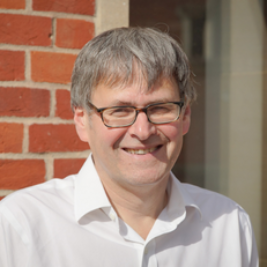 Dr Edward Kessler, MBE is Founder President of the Woolf Institute and a leading thinker in interfaith relations, primarily, Jewish-Christian-Muslim relations. He founded the Woolf Institute, originally called the Centre for Jewish-Christian Relations, in 1998 and was elected Fellow of St Edmund's College in 2002. He has written or edited 12 books, and regularly appears in the media commenting on religion and belief issues of the day.