Days after completing my master's thesis at Cambridge, I flew from my home in Los Angeles to Washington DC to begin interning at the White House. Though interns are not allowed in the West Wing as a general policy, I was fortunate enough to have an office in the Eisenhower Executive Office Building (EEOB) which faced the West Wing, as close as possible to the non-stop action across Executive Drive. The scene changed daily. Often hordes of smartly dressed reporters and cameramen stood waiting in front of the West Wing doors for the President or others to make a statement. Convoys of dozens of black SUVs idled for hours in the White House compound, ready to make a quick exit if necessary. Various events with diplomats or even the Vice President would mean a redoubling of security, closure of the front street, and the strange sensation of watching the news play live footage of the building in which I was sitting, sometimes for hours on end. 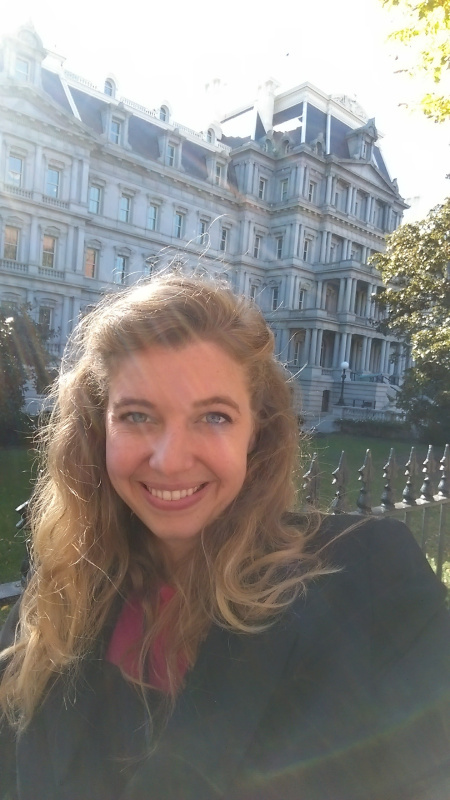 At first, public focus on the White House was at fairly normal levels. But as the election drew nearer, white tents with glaring spotlights began popping up on the rooftops of buildings all around us as news crews around the country took up 24 hour watch, positioning their anchor men and women so that the White House and EEOB was their omnipresent backdrop. The atmosphere inside the campus was also tense, especially because the Hatch Act forbids federal employees from discussing an election while at work in order to prevent anyone from using their position to unduly influence another's vote. As almost every room in the EEOB and West Wing has a television playing the news at all moments, this led to the unusual phenomenon where we could see but not comment on the frenetic action taking place all around us. 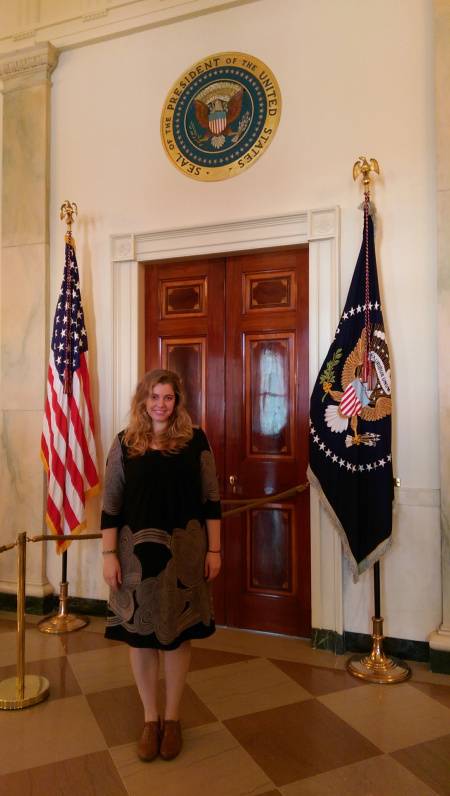 Outside the White House entrance hall

Amid the action, we worked. My job was very particular: I was charged with reading and helping respond to the most sensitive mail received by the President. This could be anything from missives on how a soldier's PTSD from the war in Iraq had impacted her family, to heartfelt pleas on opioid control, to commendations for heroism. This mail came to my supervisor and myself after being initially sorted by other interns and staff. It was our particular job to ensure that the responses the letter-writers received were as meaningful and considerate as possible. I read thousands of stories of pain, fear, happiness, desperation, compassion, and anger. It was at times overwhelming, often touching, and always thought-provoking. On occasion, I would step away from my desk to clear my head, especially after intimate descriptions of rape or suicide.

I was surprised by the Correspondence Department's attitude toward the letters - I had expected platitudes, not sincerity. But these staffers all had well-worn letters taped to their walls, and when they spoke of particular letter-writers, it was not uncommon for them to tear up. That sort of devotion and compassion seeped into me as I read the words of hundreds of people personally pleading for help, understanding, and comfort.

The President himself received 10 letters a day, letters which we helped select and which reflected the general timbre of the thousands of letters received that day. Sometimes, letters I had selected made it through the review process to the desk of the President where he would either respond to them personally, or direct us on how to appropriately respond. Through the letters, we had a direct line of communication with him, and he had a direct line of communication with the people. 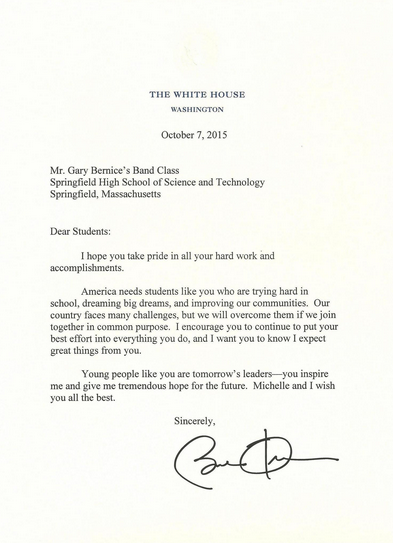 When I wasn't actively working, I attended the dozens of events put on by the internship office. We stood on the South Lawn to watch Marine One land, volunteered at the White House Halloween events (I dressed as "the ghost of student loans"), and participated in the South by South Lawn event where Leonardo DiCaprio interviewed the President on climate change.  We attended weekly lectures from every single Senior Advisor to the President as well as the Vice President, First Lady, and the President himself. As polls were closing around the country on Election Day, the President invited the interns to meet with him personally. We stood on steps in the East Room as he took questions from us, including "what keeps you up at night". We took a picture with him in front of the golden curtains.

The next morning, after we had found out that President Trump had won the election, we sat stunned in the email room of the correspondence department, watching on television as our staffers stood blank-faced in the Rose Garden. We then spent the next several days sorting the thousands of letters that came flooding in, reading, thinking, trying to respond.

As Christmas and the end of the internship drew nearer, I led several tours of letter-writers through the White House, fulfilling what was a life dream for many of them. The interns were given a tour of the West Wing, Oval Office, and Press Room at the end of our time at the White House, a period marked by increasingly loud marches across the North side of the building, and increasingly common conversations on what we would be doing next. 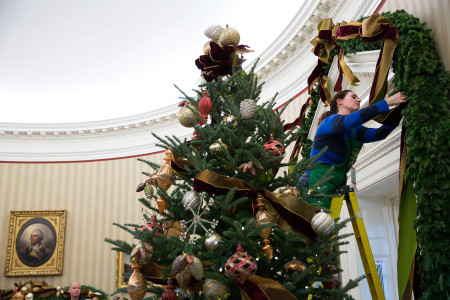 Christmas in the White House, 2016

Though the official White House Internship program ended before Christmas, I stayed on as a volunteer until the second to last day before the transition. The offices were slowly emptied of their walls of letters, boxes, and photos of Obama and his family. The staffers siphoned off as each person began their new job or long vacation. Soon the EEOB was nearly vacant. On my last day, I walked slowly by the West Wing toward the security booth where I would return my card. A Fox News correspondent was speaking into a bright light and camera in front of the White House. Dozens of tourists milled around outside the gate, while almost no one walked around inside. In two days, the whole campus would be overwrought with a new flurry of activity and hundreds of new workers, but now, briefly, it was quiet.

Madeleine Ary is an alumna of the Woolf Institute. She has long been fascinated by the intersection of religion, government and society, and completed an MPhil examining community cohesion between Christian and Muslim communities in Britain.