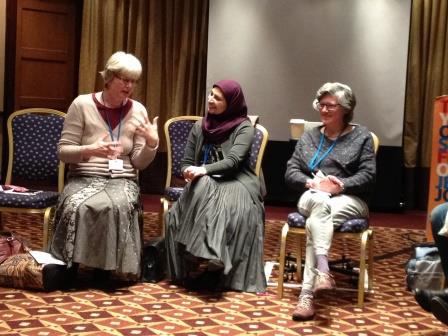 For years Jewish friends have been saying, 'Ann, you must go to Limmud'. But family obligations at Christmas have always prevented my attendance. However, when Rabbi Margaret Jacobi phoned to ask whether I would co-present a session with her and Rehanah Sadiq, Muslim chaplain to the Queen Elizabeth Hospital, on interfaith dialogue and friendship, I decided that I must say yes. Luckily, as Limmud has moved to Birmingham, where I live, and is conveniently situated for trains to Oxford, where my parents live, it was not too difficult to intercalate a day into the Christmas schedule.

Margaret and I have known each other for over twenty years. We have studied Midrash together, and reflected on motherhood together. We were both working on our PhDs at the same time – she helped me translate a passage of Talmud, and I proofread her thesis. Rehanah, on the other hand, despite several friends in common, I was meeting for the first time. The full title we were given for our Limmud session was 'Faith and friendship in multi-faith Birmingham - a model for the world'. The three of us agreed that 'model for the world' was a tad ambitious, but we liked the emphasis on friendship. And friendship, it seems to me, is a good metaphor for interfaith dialogue.

Friendship is no quick fix, no once and for all achievement. It is a long term process, with rewards all the way along. It is interesting to meet someone for the first time: I was delighted to have this opportunity to get to know Rehanah. I hope we will keep in touch. But there is always more to learn about each other, even after twenty years. Thanks to a question from her father over lunch, Margaret discovered that I had learnt the classical guitar as a teenager!

Friendship involves the whole of life. Margaret and I share academic interests; we also share family occasions. I was delighted to be present at the Bar Mitzvah of her son, and the Bat Mitzvah of her daughter. And we have given each other tips on coping with the more difficult aspects of bringing up children. Interfaith dialogue involves discovering that other faiths are not abstract, theoretical systems, but ways of life, played out through people's everyday experiences. When I have listened to too many Christian sermons presenting a one-dimensional stereotyped view of Judaism, I remember my Jewish friends, in all their variety. They exemplify the range of attitudes Jews have always had to halakhah, for example. One result of getting to know people of other faiths is that I now think of my own Christianity not only in terms of belief, but also of identity. Margaret and I recently had a conversation about Christmas trees. I pointed out their pagan origins; but she argued that despite a lack of theological rationale, they are now Christian.

Friendship means negotiating difference. Friends do not have to agree on everything, or do things in the same way. I am particularly fascinated by the differences between Jewish and Christian scriptural interpretation. The same biblical passage can have two different afterlives, as it travels through the two traditions. I spent much of my childhood in Geneva, Switzerland, and am therefore bilingual. I can speak both English and French, but not at the same time. Just as the two languages cannot be collapsed into each other, so the integrity of each faith tradition needs to be respected. Concepts in one do not necessarily exist in the other. But I have great difficulty persuading Christian friends that 'salvation', for example, is not something that means much to Jews. Not that the boundaries are impermeable – despite the best efforts of the Académie française, English words do migrate into French. And there are plenty of examples of the ways in which Judaism, Christianity and Islam continue to influence each other.

Friendship with someone of another faith, or culture, helps me both realise the contours of my own identity, and discover new facets of myself. When I attended the Kol Nidrei service at Birmingham Progressive Synagogue for the first time, I thought I was going out of academic interest. But the music and atmosphere of the worship got to me, and half way through the service I realised that I needed to make some changes in my life. The next day I sent a letter of resignation to the Archdeacon of Birmingham (without telling him how my decision had been reached!).

Friendship takes place within a context, and can therefore become a political act. Rehanah talked of her experiences of being brought up in a small minority community. And then she reflected on the current situation, in which she often feels that she is being looked on with suspicion. Creating relationships of trust across boundaries of mistrust is, I think, a religious calling. Rehanah's dress identifies her as Muslim, and therefore it requires commitment to walk into a kosher deli, as she did recently, to purchase food for a chaplaincy function. There's no need to be high-flown about it: all across Birmingham neighbours and work colleagues of different faiths extend the hand of friendship, out of simple human kindness. But it’s easy to stay at a comfortable, superficial level. I focus on Jewish-Christian relations, rather than engaging in interfaith dialogue in general, so as to explore the possibilities in depth. Animosity between Jews and Christians has been around for a long time. Personal warmth is a good start to dialogue, but it only gets you so far. Understanding the issues requires head as well as heart. One of my interests is the portrayal of Jews and Judaism in Christian preaching. There are no easy solutions to the dilemmas involved in retelling gospel stories to today's Christian congregations whilst remaining respectful towards Judaism. I need to study the scholarship, as well as drawing on my personal experiences of dialogue with Jews.

One of the strengths of Birmingham and the Black Country is the local sense of humour. Margaret, Rehanah and I are incomers – none of us was born here. But we have found friendship here, across faith boundaries. We don't pretend to have all the answers, but we hope that you too can have a laugh with your friends, of whatever faith or none.

This article was written by Dr Ann Conway-Jones, a Christian scholar specialising in early Jewish-Christian relations, and the beginnings of mysticism. She is an honorary research fellow at the University of Birmingham, and the author of Gregory of Nyssa's Tabernacle Imagery in Its Jewish and Christian Contexts. She is actively involved Jewish-Christian dialogue, and has been elected joint honorary secretary of the Council of Christians and Jews.