Carolyn: It was a privilege to help plan the commemoration service. It was more difficult than I'd imagined to actually read out my prepared text about the extent and scope of the Shoah, and was a stark reminder of the ways in which the horrors were ignored or passed over as they were happening. I was deeply moved by the suggestions of each participant about how we might resolve in a practical way to not stand by in future tragedies, as the five main candles were lit.

Jo: The experience of participating in an act of remembrance for HMD and those affected by genocide around the world, has been deeply impacting. Having attended commemorations before and been moved, actually standing and speaking, voicing the atrocities that happened and the stories of real people, was a very different, emotional experience. On a certain level I felt closer and a sense of ownership of acts of violence that were carried out by seemingly 'normal' human beings. What struck me was that the tormentors in many situations, lived alongside and were community with the tormented, before the horrific murders began. I have come away from the experience with a heightened sense that it could quite easily have been my family, community and society involved, if intolerances had spread. More importantly, and remaining unpolitical in my comments, human nature is such that these terrible events could still happen and maybe they are happening in the 21st Century. Meeting together with other members of the Cambridge Theological Federation to present this time of commemoration provided very valuable learning for me. Overlooking differences in our traditions and coming together simply as God's children, burdened by what we have learnt of the suffering of others was important. I think we tried to raise a awareness of HMD and remember those who we do not want to have died in vain. We don't want to stand by and watch but we want walk alongside people of all faiths and none, to play even the smallest of parts in preventing violence and genocide in the future. 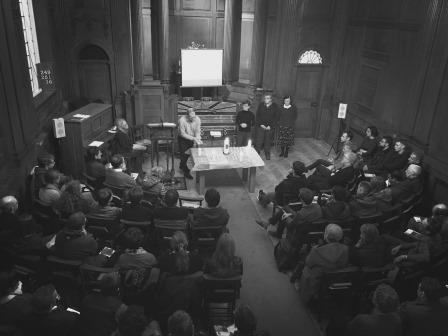 CTF students each light a candle to affirm their commitment to the HMD theme, Don’t Stand By. (Photo by Andrew Brown)

Lydia: Being part of the team preparing the HMD act of remembrance was a good learning experience for me. Having to plan an act of remembrance rather than an act of worship was totally new, and opened my eyes to some of the issues that need to be considered, particularly the use of language. I valued the chance to tell others about the genocide in Cambodia, as I had visited the Genocide Museum in Phnom Penh and found it terrifying. I also learnt from working with others from across the Federation and hearing wider perspectives.

Nick: Being involved in planning the Act of Commemoration was a difficult but rewarding experience. It was particularly valuable to place events in Europe in the 1940s in context with other subsequent genocides, and to consider how this can apply to things happening in the world today. Reading through the testimony on the Holocaust Memorial Day website was hard, but not hopeless, showing that while humanity is capable of prejudice and terrible cruelty, people can also be compassionate, resilient and willing to risk their own lives to help others. Thinking of ways to 'not stand by' forced us as a group to consider our own actions and what we as individuals can and should do, and I feel as a result of this I am now more aware both of history and current issues.

Timothy: I was surprised at how emotive I found the event to be, having been involved in its planning and organising. It was difficult to hear the stories of others in genocides since the Holocaust, knowing that despite the horrors of the Shoah genocides have continued. I found it to be a stark reminder of the power of stories and testimonies, and that every individual who suffered during the Holocaust each had a unique story, most of which have been lost forever. The response of lighting candles as a commitment to 'not standing by' I found particularly powerful, as was the symbolism of the glow sticks - broken to remind us that even in a broken world light and hope can be found.

The Cambridge Theological Federation is an ecumenical partnership of nine institutions. The students, who organised the commemorative event, hail from Westcott House, Westminster College and Ridley Hall.

Photo credit: Andrew Brown, Minister of the Cambridge Unitarian Church, where the event was held.