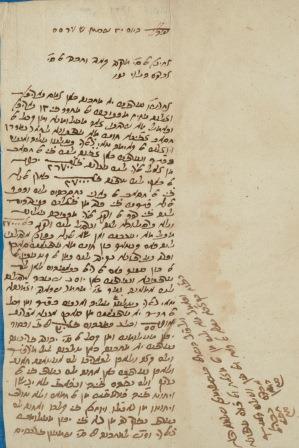 CUL Or. 1081.2.46: A Judaeo-Arabic Cairo Genizah letter from the early 19th-century. Reproduced with kind permission by the Syndics of Cambridge University

There are a few drawbacks associated with choosing an academic subject slightly outside the typical canon of university education – lack of teaching jobs, low book sales, non-existent prizes - but there is one thing I am immensely grateful for in my own choice of field, working on Jewish Arabic: it has enabled me to read in various alphabets, and this has been the potential key to otherwise inaccessible areas of human history.

However, being able to read something is often not enough. What outsiders to small philological niche fields may not fully appreciate is how difficult it can be even for experts in a language to read many arcane texts. I think perceptions are sometimes shaped by movie scenes like those of Indiana Jones who without hesitation is able to read any text in any given language on the spot (and he is not even a linguist, but an archaeologist!). In reality, while philologists will be perfectly able to read commonly occurring formulae or pieces of writing that contain phrases they have seen before in other texts, it is much more difficult to read passages with more unusual content or those that move outside familiar expressions. It can take days, weeks or even months to work out particularly difficult phrases in documents or literary texts. Editing texts that have not been worked on before by anyone can therefore be labour intensive, time-consuming, and at times extremely frustrating.

But this is work that needs to be done. Editions of primary source material are one of the sustaining pillars of research, be it on cultural, social, economic or political history. Yet in the current academic climate, it can be difficult to convince Research Councils and Charitable Foundations to fund extensive work on editions of documents as specialist concentration on the minute details of particular historical situations may seem less immediately striking than work featuring overarching themes, or comparative analyses. Yet, without the details it is impossible to make solidly based syntheses or convincing grand narratives..

I am very fortunate that the Woolf Institute understands the value of primary editions, and allows me to dedicate a large part of my time as Senior Research Fellow to work on documents written in Arabic and Judaeo-Arabic (Arabic written in Hebrew characters). Currently, I am transcribing, translating and commenting on a large number of Medieval and Early Modern documents, to open them up for other researchers and to broaden our understanding of the Medieval and Early Modern Mediterranean.

I find the languages used by merchants particularly interesting. Traders often use certain spoken argots. This arises out of a need to develop coded or secret language to disguise the specialised knowledge employed in their trade, and also gives them confidence as a special social group. Traders are also placed in communication networks more far-reaching than those of other people – in other words, they are much more exposed to other dialects and languages which influence the languages they themselves speak and write.

The circumstances under which traders write differ substantially from those of other contemporary scribes: they often have to react very quickly to incoming letters to be sent out again on the next ship or to relay urgent insider knowledge. Therefore the act of composing a letter is very different from that of composing a legal document or a well thought-out community missive. Traders have to write very expressively and precisely to make themselves understood in order not to suffer financial losses. In addition, business letters were often sent out in four or five different copies by different messenger, in different ships or caravans to ensure their safe arrival, which adds to the very special situation of composing business correspondence.

In the Humanities, as opposed to the Sciences, scholars normally work only by themselves, but I really appreciate collaborating with colleagues. One of my projects deals with correspondence of the Alexandrian Jewish community in the 15th-century. I am producing this in collaboration with my dear colleague Dotan Arad from Bar Ilan University, who is a Mamluk historian. Another book I am writing in collaboration with my former PhD supervisor Geoffrey Khan, the Regius Professor of Hebrew at Cambridge. My newest collaborative project is an exploration of the so-called Prize Papers. 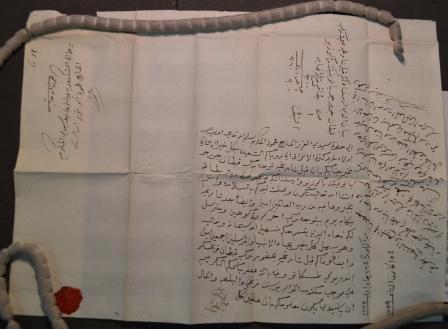 TNA HCA 32/212: An Arabic letter from the Prize Paper Collections, sent on a ship from Livorno destined for Alexandria. Reproduced with kind permission by The National Archives

The Prize Papers are collections of letters from ships captured by British ships in naval warfare, which were analysed to prove that wares confiscated indeed belonged to enemy merchants. They are kept in The National Archives in Kew, and one of their boxes contains a sack full of business letters in Arabic and Hebrew script, which were seized in 1759 by the Royal Navy from a Venetian ship bound for Alexandria. I very unexpectedly came across this great treasure when I participated in a conference called "All at Sea" at the National Archives. They had invited me as someone with an interest in mercantile correspondence, and I had been asked to give a comparative talk about merchants' letters found in the Cairo Genizah. After my talk, I was approached by Professor Thomas Truxes from NYU, who said he wanted to show me something. When he then gave me a picture showing a few dozen letters written in Arabic and Hebrew script, my heart leapt.

It was the linguist's equivalent of opening Tutankhamun's tomb when I first set eyes on the actual documents. Virtually untouched for two and a half centuries, most of the letters were still unopened and are in the same pristine condition as when they were archived in the 18th-century. They present a most exciting opportunity to investigate the interaction between Jewish, Muslim and Christian merchants across borders in the 18th-century Mediterranean. The letters, numbering in the dozens, are particularly valuable as very little comparative material in Arabic script from that period is known and virtually nothing has been edited and published on the topic.

Because my expertise is reading Hebrew script, as my main field of research is Judaeo-Arabic, I was looking for a collaborator with experience in reading 18th-century Arabic script. Just at the right moment, I was contacted by an Egyptian student, Mohamed Ahmed, who wanted to work with me as a postdoc. It turned out that we had very similar research interests, and I suggested to him that we should work together on this project. We are now applying to various places for funding for Mohamed so that we can work together on the letters and prepare a published edition of all the letters. This great find will then be accessible to academics and the public. After chancing upon the letters in the first place and then finding an ideal co-author of the volume, I hope to be third-time lucky with the funding application!