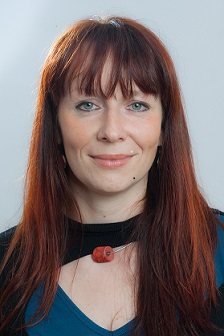 When I showed the first draft of this blog entry to my husband, he advised me with his usual rather blunt honesty that a man would never write like this and that the text is at odds with my confident appearance as a lecturer. Which is very interesting as whenever I am riddled with doubt, like so many other female academics I know, about general academic abilities and upcoming slightly more high-profile appearances in particular, I usually think about how a man would approach this and how little they care about any obstacles that women typically tend to fret about.

Having said this, when I was asked to present as part of the Cambridge Series at the Hay Festival 2015, going as an unknown academic to a fairly well-known literary festival caused me to become a little nervous. Speaking to a largely non-academic audience can be frightening. When you talk to your colleagues at conferences or seminars, you know you can to a degree trust in the threat of reciprocity – if they decide to leave in the middle of your lecture, you may do the same thing to them when it is their turn. Yet what, aside from social convention perhaps, is to stop a crowd bored by you presenting what you might find terrible interesting but which does not quite peak their interest from walking out on you? This anxiety was not helped by me scanning up-and-down the programme to see whether other non-native speakers of English were giving any lectures, and there seemed to be few.

I endeavour to speak without a script at all my lectures, as I know how difficult it is for an audience to follow a read paper. As a non-native speaker, however, I am prone to brain-freezes, in particular of late when heavy work load and general life stress appears to have caused the meltdown of many thousands of synapses, so ad-libbing is always a bit of a gamble. Enough to be anxious about but, like in the old Yiddish parable of the goat in the house*, I was then asked to also contribute to the Hay levels, three-minute programmes aimed at A-level students. These segments are filmed in one go without editing, a truly terrifying prospect for someone with sloppy enunciation such as myself. In addition, while academics are normally very happy to waffle for 40 minutes, it is a daunting prospect to limit oneself to three minutes without veering entirely off-topic. Needless to say, after this the lecture was not the focus of my fretting anymore, but rather how I could survive the filming of the three-minute Hay level bit without entirely losing my dignity.

I had never been to Hay and I was very curious to see 'the festival in a muddy field', as it is called by a dear colleague and probably others. As my talk was at 10am, I stayed overnight on a farm B&B and shared the breakfast table with novelist and dramatist Nell Leyshon, who told me of one speaker speaking to a Hay audience of a handful of people, with someone walking out pretty much straight away. Ha, I thought, my fears were not entirely unfounded then. After slight confusion about the exact location of the Festival area and some erratic driving I arrived dead on time (very important for a German) and was then led around the place by the intern assigned to look after me.

The architecture of the Hay festival site is quite amazing. They really do create a little town in a muddy field, with a number of stages, restaurants, commercial booths, and everything connected by wide walkways with roofs protecting you from the rain. The green room is large, and there is a buzz among the people about to go on the various stages to perform, with interns from various countries running around to make sure everyone is led to the right place at the right time. Queuing for the Ladies' rooms in the Artists' area was a slightly strange experience as I kept seeing faces I was very familiar with but was never sure whether I was being rude by not acknowledging and greeting someone I actually knew personally or by looking just that split second too long at someone famous from television. I guess this sort of thing happens a lot if you live in LA.

'My' intern was well-chosen, as with her very petite frame, she made me feel like a powerful giant in comparison (perhaps this is the advantage men have over women?). And I realised that I was perhaps not the most anxious person on stage when the woman announcing my talk introduced me as 'Esther-Miriam Webster'. Coming onto the professionally lit stage made me feel like a rock star. Still, there was some sense of (confident) deer-in-headlights as I could not make really make out the audience against the lights in the darkened tent. I sensed the presence of many, but only at the beginning of the Q&A round when the lights were turned on, I saw that a rather large crowd had made their way into my tent on this early Sunday morning, perhaps 250 people – a few more than my usual ten-people max seminars.

The atmosphere during the Q&A was lovely and the questions the best one could hope for. The audience laughed at my silly jokes, and I learned a great deal from the comments and anecdotes people told me, although I suddenly had a vision of a Daily Mail headline 'Cambridge lecturer disses Black country accent' after making a disrespectful remark about that regional accent. When the red light indicating that we had to stop the session right away flashed, I was quite sad to have to part way with all the interesting people, and that I could not respond to the many more raised hands. After the talk, a number of people came to me to have a chat about some of the topics I raised, and I was approached by more audience members while I was making my way through the tents subsequently, thanking me for the talk and how I had given them food for thought. What else could someone with the job to disseminate knowledge want?!

The dreaded filming of the three-minute segment was still ahead. When the intern fetched me to tell me that the person doing the recording was available it was a bit like 'the dentist will see you now'. I had to stop the filming a few times because I heard myself mumbling and/or rambling. Then two-thirds through what I thought was a triumphant and perfect take, the technology failed, and we had to restart. I am afraid my final piece is not quite what I hoped it would be (there is certainly some mumbling).

All in all, the Hay experience is something that offers a lot to academic speakers. It was fantastic to have the opportunity to engage and share one’s research with the very interested and interesting audience. I would recommend it to anyone.

Acknowledgements:
I would like to thank Mandy Garner, the Communications officer at the University of Cambridge, who I had communicated with for the past months about the festival participation, for all her support. Based on the fact that she replied to my emails usually within minutes at all hours of the day I imagined her to be an unattached woman in her early twenties. To my surprise, she introduced herself to me after my talk with her teenage daughter.

*The goat
A man goes to a wise Rabbi and complains that his house is too crowded with a quarrelsome wife, grumpy in-laws and a large number of noisy children, 'there is no space and no rest!'. The Rabbi advises him: 'Take a goat to live in the house with you!'. The man goes home, brings the goat into the house, and there is mayhem. The goat kicks the children, knocks down the pots and plates, and defecates everywhere. The man runs back to the Rabbi and says: 'This has made it so much worse. It is absolutely unbearable!'. The Rabbi then tells him to remove the goat from the house. The man goes home and the goat is kicked out of the house. The man comes back to the Rabbi the next day, 'You were right, wise man, everything is so nice and quiet now!'.

This article is written by Dr Esther-Miriam Wagner who is a Senior Research Fellow at the Woolf Institute. She spoke on How Language Shapes Our Identity as part of the Cambridge Series at the Hay Festival 2015. The audio file of this talk will shortly be available.