Dr Jan-Jonathan Bock examines the results of an academic workshop he recently hosted in Berlin to reflect on the implications of growing cultural difference for German society.

Since its reunification in 1990, Germany has been grappling with definitions of national identity, belonging, and citizenship. Memories of the horrific legacies of Nazism and the Holocaust intersect with new political and social realities, such as the addition of the socialist East, the role of ongoing and high migration, globalisation, Islam and Muslim hybrid identities, and citizenship legislation. Since the summer of 2015, the arrival of over one million refugees has intensified debates about what it means to live with cultural difference and how Germany ought to respond to poverty and suffering exploding in Europe's richest country. Young and old Germans launched an unprecedented number of civil society initiatives. At the same time, reactions to assaults on hundreds of women in Cologne and to terrorist attacks in France and Belgium revealed xenophobia and political radicalism.

Having spent one year in Berlin – to examine the impact of crisis perceptions on trust in state institutions and in heterogeneous community life – it was time to take stock of how people in Germany were experiencing differences and diversities in the wake of the so-called refugee crisis. Together with Sharon Macdonald – currently Alexander von Humboldt professor at Berlin's Humboldt University – I organised an academic workshop at the Institute of European Ethnology. Leading researchers from US, UK, and other European and German universities presented their latest findings and discussed the consequences of growing heterogeneity for German society.

In one panel, 'Contesting Diversities', Naika Foroutan, from the Berlin Institute for Integration and Migration Research (BIM), advanced her concept of the 'postmigrant society'. In German, the term Migrationshintergrund (migration background) is used to describe people who have themselves migrated to Germany from another country, or who have at least one parent or grandparent that was not born in Germany. Naika showed that the term produces and exposes ongoing otherness and non-belonging, as the history of one's family is given precedence over the lives lived by people in contemporary Germany. Her work is concerned with advancing what she calls the postmigrant society paradigm: a society in which the origin of one's parents or grandparents is no longer relevant for developing and applying identity markers.

Scepticism towards non-traditional Germans is greater in the former East, perhaps also since only few non-white migrants have settled there since reunification in 1990 (and hardly any migrants had arrived during the GDR dictatorship). Given the unlikelihood of concrete everyday interaction, Naika suggested moving beyond the contact hypothesis, which posits that only real-life encounters can reverse prejudices and fears. After 1945, Naika argued, West Germany underwent profound re-education programmes to extinguish anti-Semitism, even though German-Jewish contact was virtually non-existent. Schemes could be considered for areas with high levels of Islamophobia, where Muslims also tend to be absent. However, some panel members questioned the success of postwar anti-Semitism re-education programmes: has the attitude really disappeared, or have Germans simply learnt not to voice it in public? This question remained unanswered.

In her presentation, Anna Louban then showed that everyday interactions between German bureaucrats and foreigners did in fact not reduce a sense of difference or hierarchy. On the contrary, even the German spouses of foreigners desiring to settle in the country are often subjected to inquisitive questioning. Dealing with cultural difference and diversity, Anna underlined, has still not become an uncomplicated routine in public institutions. 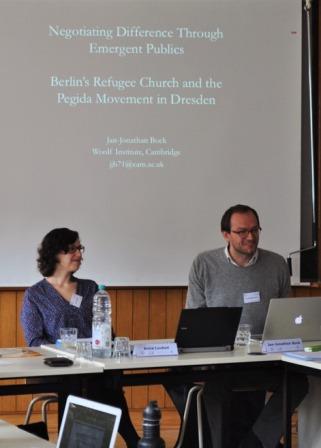 In my own paper, I discussed the Dresden-based Pegida movement – and anti-establishment and anti-Islam platform founded in October 2014. I suggested that Dresden's complete destruction in the war had been instrumentalised by the East German dictatorship to polarise East-West relations, portraying the city as an innocent victim of imperial aggression. Today, Pegida organisers manipulate this resentment at the loss of homeland and a sense of belonging in the devastated city, which is slowly being rebuilt. The arrival of non-Germans is cast as a continuation of homeland destruction.

Shana Cohen addressed the ways in which community can exist in an increasingly diverse society, placing developments in Germany in a wider, European context. Boris Nieswand reflected on how diversity can be theorised as person-related difference. Uli Linke, from the Rochester Institute of Technology, joined Shana and Boris on the second panel. Uli has published extensively on notions of race and belonging in post-Nazi Germany. In her talk, she focussed on the reconfiguration of German-ness as defined by speech, developing the notion of lingual citizenship as a new practice of inclusion and exclusion in an increasingly culturally diverse society. Friedrich Heckmann engaged with the need for political answers to growing heterogeneity, before Werner Schiffauer concluded the panel. His thesis that 'refugees welcome' initiatives across Germany constitute a new type of social movement induced a lively discussion. The disparate, heterogeneous, non-hierarchical, non-political, and spontaneous civil society projects supporting refugees do not fit traditional movement theories. Perhaps societal reactions to the arrival of hundreds of thousands of refugees in Germany demand that we expand our conceptual toolkit to analyse unprecedented forms of social action, characterised by short-lived spontaneity, the absence of a clear political agenda, and without an overarching leadership structure. 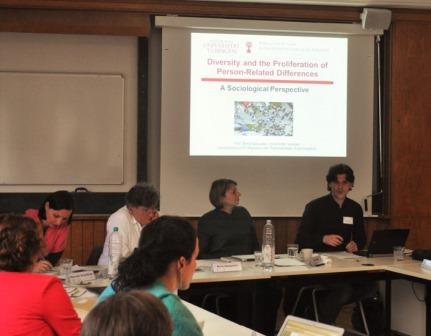 On the workshop's second day, Esra Özyürek talked about East Germans who converted to Islam after the fall of the Wall. She described such conversions as expressions of a longing for stability and community in times of rapid change, when old certainties and structures disintegrated in the formerly socialist society. Muslims did not question East Germans' German-ness, as many West Germans did.

Carola Tize presented her PhD research from Berlin's Neukölln neighbourhood as a case study of urban diversity, suggesting that rapid changes of gentrification and digitalisation affect long-term migrant residents as much as working-class or unemployed Germans. Karen Schönwälder showed that inhabitants of diverse quarters often reference cultural difference as a positive aspect of their neighbourhoods. She highlighted that negative descriptions of high-diversity neighbourhoods as 'no-go areas' or 'ghettos' are predominantly used by outsiders to reject the idea of multiculturalism. Based on his research with artistic refugees, Damani Patridge pondered the meaning of 'pity'. His interlocutors explained to him that they expect solidarity from the German people, not pity – in fact, they reject pity as hierarchical and demeaning. But, Damani asked, is solidarity across such diverse fates really possible? He raised important questions about our capacity to form bonds of solidarity across deep divisions, and asked whether solidarity is not equally hierarchical, since it is usually offered to a suffering population by a more privileged group. 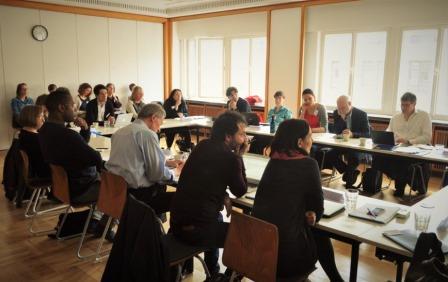 The final panel expanded on new forms of action and activism that have emerged in recent years. Jonas Tinius's paper discussed refugee theatre in West Germany's Ruhr Valley, examining the role cultural institutions can play in negotiating new forms of local belonging in an increasingly diverse society. Serhat Karakayali's research showed that many people involved in support initiatives have got their own experiences of displacement and flight, either going back to family histories from the Second World War, or because they entered Germany as refugees during previous crises. In a way, support movements constitute new hybrid forms of social action, advancing the postmigrant paradigm Naika Foroutan outlined. Petra Kuppinger's work illustrated the growing importance of Islam-inspired art in the city of Stuttgart, before Gökce Yurdakul questioned Germany's capacity to offer genuine inclusion for religiously marked minorities. Her case study was the 2012 debate about ritual male circumcision, which produced short-lived alliances between Jews and Muslims to defend their right to religious rituals. When the German parliament passed an unambiguous law in defence of religious practice to end the debate, however, such cooperation disintegrated again.

The two days were fascinating, productive, and insightful. Reflecting on how cultural differences are experienced in contemporary Germany reveals a range of understandings regarding diversity and heterogeneity. The so-called refugee crisis has produced new societal alliances and forms of social action, but it also revealed inadequacies regarding the capacity of German society and at least some state institutions to be truly inclusive. More research is needed in this field. For those interested in the topics our workshop debated, Sharon Macdonald and I plan to publish all papers in an edited volume in the near future.

Dr Jan-Jonathan Bock is a Junior Research Fellow at the Woolf Institute. He is working with Dr Shana Cohen and Dr Ed Kessler on a major ethnographic research project examining how crisis perceptions impact on trust in state institutions and in community life in heterogeneous, diverse societies. The project compares Berlin, Paris, Rome and London. Read about it here.