From Panegyric to Polemic 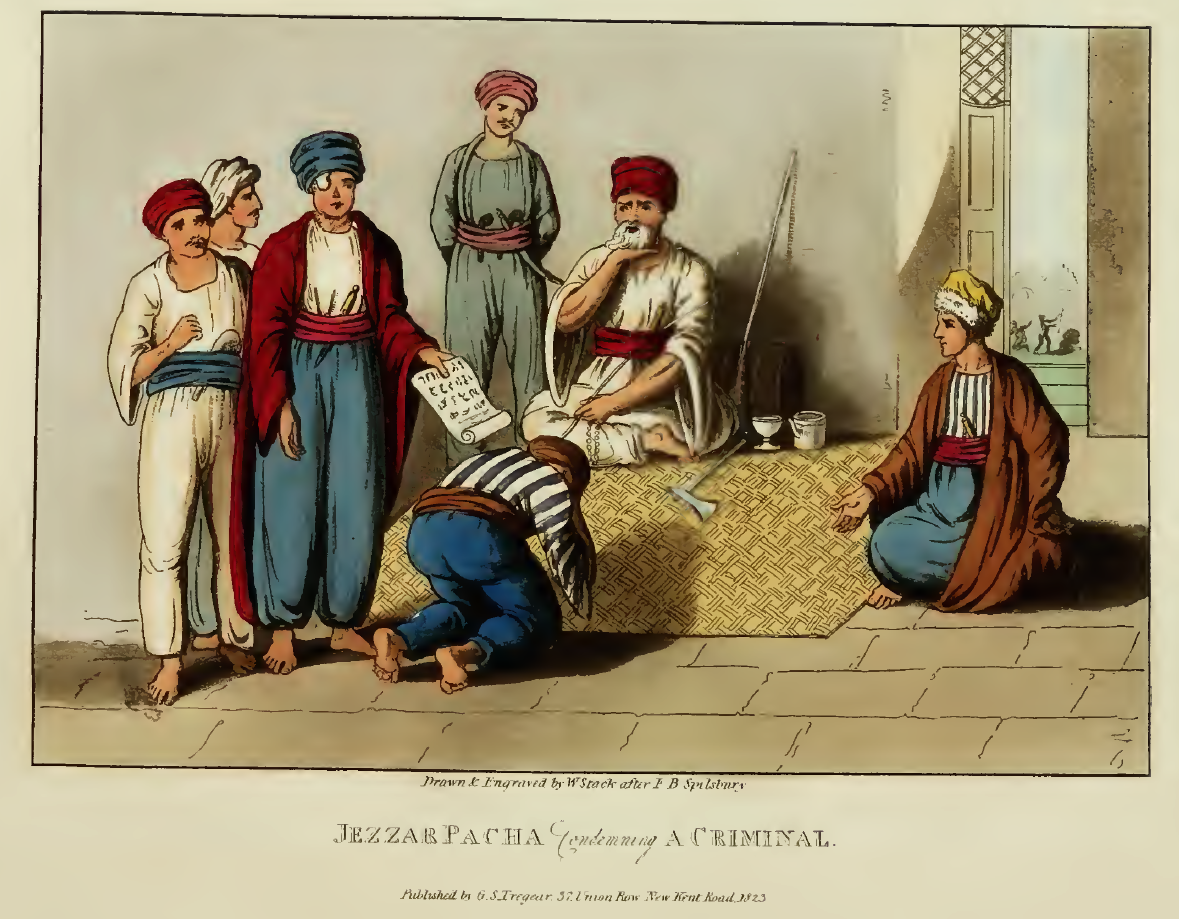 The Jewish official Haim Farhi (in red robe), with his patron Aḥmad Pāshā al-Jazzār, governor in Acre from 1776 to 1804. Haim coördinated the city's resistance to Napoleon Bonaparte in 1799. (F.B. Spilsbury, Picturesque Scenery in the Holy Land and Syria. London, 1823)

When the renowned poet al-Buḥturī came to Egypt in 892, he met one of the highest officials in that land, a Christian called Isḥāq ibn Nuṣayr al-'Ibādī. Ibn Nuṣayr handled official correspondence for the Muslim ruler of Egypt, the Turk Khumārawayh (d. 896), and was paid handsomely for his services. He was so wealthy that al-Buḥturī, a Muslim, dedicated several praise poems to him, doubtless hoping for a reward, after the custom of poets. Here is a typical line from one such panegyric (al-Buḥturī, Dīwān. Ed. Ṣayrafī, 5v. Cairo, 1977–78, vol. 2, p. 1077, trans. LY):

No noble house I might entreat, in any far-flung land,
tops Ibn Nuṣayr, gold-mine of good; men’s hopes are in his hand.

Ibn Nuṣayr was of old Arab stock, from a group called the 'Ibād that came from the city of al-Ḥīra in Iraq. The 'Ibād had been Christians for centuries. But Ibn Nuṣayr's religion seems to have mattered little to his patron Khumārawayh, to al-Buḥturī, or to the other Muslim elites of Egypt at the time, who recognised him for his reportedly matchless skill in Arabic prose composition. He was one of untold thousands of Christian and Jewish officials who helped to administer Egypt from its conquest by Muḥammad's followers, in about 640, down to the eve of the modern period and beyond. It was not unusual, in fact, for states across the Islamic world, from Spain to India, to empower non-Muslims, as military commanders, ambassadors, and officials of all kinds.

There is little sign that Muslim rulers employed non-Muslims in order to make a show of their tolerance or to celebrate diversity. They simply wanted the most capable, loyal, and affordable supporters they could find. In particular places and times, and for a variety of reasons, non-Muslims seemed to fit that description. Some of them, for instance, could deliver the allegiances (and taxes) of their own large communities. Others passed down proprietary administrative customs through family lines. At times non-Muslims were thought, rightly or wrongly, to be especially loyal, because they would not seek to take power for themselves. Certain rulers felt that they would be able to control or mistreat officials from subordinate non-Muslim communities with impunity. In the engraving above, the Jew Haim Farhi wears an eye patch because his patron al-Jazzār ("the Butcher") had maimed him in a fit of pique.

Not surprisingly, many influential voices objected when rulers who wished to link themselves to the prestige of Islam empowered unbelievers instead of Muslims. The poet al-Buḥturī, who heaped praise on the Christian grandee Ibn Nuṣayr, might have found it curious that other snippets of his verse resurfaced in an impassioned treatise against the employment of Christian officials that was composed in Egypt centuries later. The author of that book, The Sword of Ambition, was a disgruntled scholar-bureaucrat named Ibn al-Nābulusī (d. 1262). Out of work and with a large family to support, he implores the sultan of Egypt to dismiss the state's numerous Coptic Christian administrators and to hire him instead. Ibn al-Nābulusī even disparages Coptic converts to Islam who, he claims, only feign conversion to advance their careers. If fellow Christians scold them for converting, he writes, their hearts (but not their allegedly stammering tongues) quote al-Buḥturī's lines, on first love (Ibn al-Nābulusī, The Sword of Ambition. Ed./trans. Yarbrough. New York, 2016, pp. 92–93, alt.):

Though though hadst flung thy heart whither thou durst;
True love's yet hers whom thou lov'dst first.

The idea, of course, is that the speaker is still enamored of his original faith. Ibn al-Nābulusī also mustered more serious arguments against his non-Muslim rivals. He noted, for instance, that the overwhelming majority of Muslim legal scholars who had discussed the legality of employing non-Muslims had forbidden it. There was, too, a wealth of parables in the Islamic literary tradition that insinuated the disloyalty of unbelievers, and passages in the Qur'ān that appeared to warn the Prophet's followers not to befriend them. Ibn al-Nābulusī drew on these and many similar materials, as did other Muslim polemicists in late-medieval Egypt, though they all had to dance round the historical record, which gave evidence that Egypt's Muslim rulers had almost always maintained skilled Christians and Jews on the payrolls.

Why did some Muslims heap praise on non-Muslim state officials, while others fulminated against them and most ignored the issue altogether? The question goes to the heart of how multi-religious polities manage difference, inclusion, and unequal distributions of power and wealth that cut across religious divides. To really answer it would require a book—one which I am currently writing, in fact—but the basics of an answer are clear.

Premodern Muslims who voiced resentment against powerful non-Muslims were not simply applying the Qur'ān or the judgments of Islamic law. These were the same for al-Buḥturī, Khumārawayh, and the minority of Muslim jurists who permitted non-Muslim state officials (e.g., al-Māwardī, d. 1055) as they were for Ibn al-Nābulusī and his fellow polemicists. What really separated Muslims who condoned empowering non-Muslims from those who condemned or ignored it was how that employment affected their respective access to resources, not merely material-economic resources but also intangible ones like prestige and political influence. Some Muslim religious professionals felt that it hurt the "brand" of Islam, and thus of themselves as its representatives, when non-Muslims who implicitly rejected their beliefs were honored with state appointments. Other Muslim scholars, however, felt that to take a job from the iniquitous state was a shame, not an honor. People of this kind tended not to trouble themselves much about the matter. Some circulated a story in which the Prophet Muḥammad foretold that the Copts would, by taking care of Egypt's administrative drudgery, help its Muslims find time for religious devotion. Ibn al-Nābulusī and his ilk, by contrast, competed directly with non-Muslims for jobs as well as for prestige. Al-Buḥturī, a poet, occupied a niche well apart from Ibn Nuṣayr's and had little reason to envy him, though he did seek his largesse. In general, people who felt adequately provided for and respected were far less inclined to attack allegedly undeserving rivals. These distinctions offer no easy answers in places where competition is entangled with religious and other kinds of human difference. But they may help us to see why ostensibly religious conflict flares in some settings, while superficially similar ones produce poems of praise.

Luke Yarbrough, PhD is Assistant Professor of History (on leave) at Saint Louis University in the United States, and a 2016–17 Humanities Research Fellow at the New York University Abu Dhabi Institute.