French Presidential Election (2nd Round Special): What will Macron and Le Pen Do Regarding Religion in France?

In the inevitable chaos of an election campaign, it's always difficult to decipher the differences between what a politician says in their manifesto, and the policies they are likely to be able to implement.

While both of the French presidential candidates have been typecast (one as a neoliberal social democrat, and the other as a far right/nationalist nativist) neither have clearly defined beyond doubt their positions on the political spectrum.

Nevertheless, when it comes to their approach to religious tolerance, Emmanuel Macron and Marine Le Pen, appear to be very distinctive.

This piece will look at three key religious issues which divide and define Le Pen and Macron. 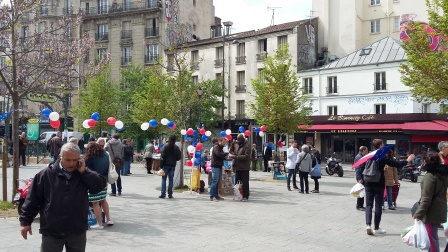 Last day of the campaign: all is quiet in the Paris neighbourhood Ménilmontant

The embedded principle of secularism or Laïcité in France is of ongoing societal concern. Macron, a social and economic liberal, has consistently defended it as a legal norm but not as a moral value.

By Macron's terms, a court judge would rule not on the basis of religious belief but empirically verifiable argument.

By contrast, Le Pen has hammered home the message that France should be proud of an exclusively Catholic heritage and that nativity mangers should be seen in both town halls and schools (secular sites of the French Republic). Le Pen's rhetoric plays on the idea that there is currently a lack of 'national preference'. 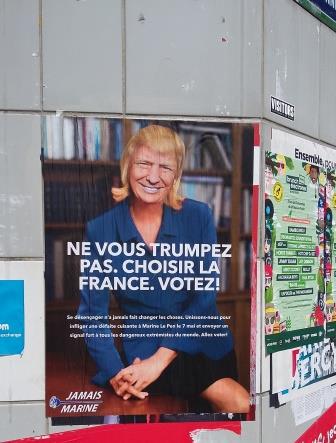 Eng. Don't Trump yourselves (a play on the verb "se tromper", to fool oneself)

Throughout his campaign, Macron has been careful to remain discrete on the question of religion.

However, on several occasions he has saluted the contribution of Jews and Muslims to French society. Moreover, as regards history, he has clearly stated that he considers France responsible for criminal acts both in colonial Algeria and during the Second World War.

Le Pen is an unapologetic Islamophobe and though she has not publicly denied the Holocaust, she recently refuted French responsibility in the deportation of Jewish people during the Second World War. 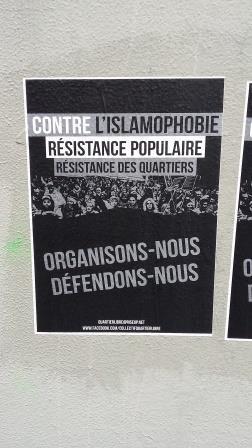 Islamophobia is a pressing matter of concern in the French capital

She draws on the 'Clash of Civilisations' discourse, portraying her party as the protector of christian values yet she has had some success in gaining some Jewish voters through her tough stance on (Islamic) terrorism.

Like Sarkozy, Macron is committed to improving institutions for French Islamic representation both to control the preaching of hate and to give the French Muslim community more of a voice.

Similar to the current French administration, Macron has pledged to reduce discrimination where possible, often targeted towards practicing Muslims, and in particular regarding employment.

However, his side-lining of Mohamed Saou, who stated his opposition to the Burkini ban, and declared that he was not Charlie on social media before joining Macron's "En Marche" party, indicates that he may do little to change a situation of structural racism towards French Muslims of northern and western African descent, in France. "Revolt rather than vote": the perception that a Macron Presidency will mean the status quo in France is driving abstentionism, particularly on the left.

Le Pen's most well-known policy line amalgamates immigration and extremist Islamism. Again, this is a view as opposed to evidence-based. Nevertheless, to this end she would stop birth in France being sufficient criteria for citizenship, hugely tighten immigration (including a possible Frexit), and stop offering asylum.

Regarding anti-terror measures she would broaden anti-terror legislation and deport dual nationals suspected of terrorism. However, while her rhetoric on terrorism is particularly vehement, her policy proposals are only merely iron-clad version of existing legislature…

This article is written by Dr Sami Everett who is Researcher at the Woolf Institute, working on a major ethnographic research project examining interfaith cooperation in relation to the concept of Trust and Crisis across Berlin, Paris, Rome and London. Sami is responsible for the fieldwork in Paris. [Read about the project here.]