As an introductory post to his thinking and research, Dr Sami Everett reflects here on inter-religious life in Paris broadly and in particular zooms in on a postcolonial urban site where solidarity and social issues formulate a non-standard narrative of immigrant coexistence. 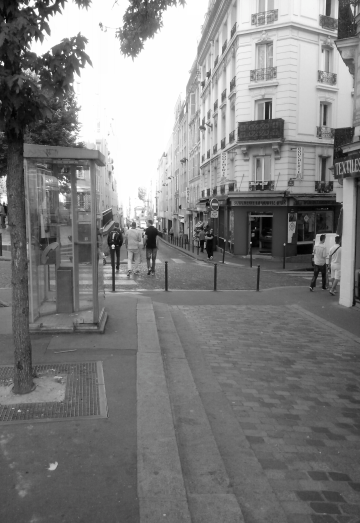 The majority of Jews and Muslims living in France today are of North African descent. For the most part, they live in île-de-France, Greater Paris. Jewish-Muslim relations in Greater Paris constitute a fulcrum of the French secularism conundrum that purportedly neutralizes ethno-religious specificity. As historical studies are beginning to show (largely in the US), minority-state relations belie the complex, postcolonial question of French Middle East relations refracted through the memory-lens of the war with Algeria (1954-62) and over a century of North African immigration as well as the shortcomings of the French philosophy of intégration to Gallicise immigrants, at all costs. My research at the Woolf Institute has a twofold focus. First I am exploring the intergenerational evolution of feelings around Jewish-Muslim Maghrebi (North African) belonging and in so doing offering a non-idealised counter-narrative to unbearable inter-community strife, implicitly unpacking anti-Muslim stigma. Second I am observing this relationship within the context of the contemporary struggle against prejudice in French minority civil society. Contemporaneous to the start-stop process of excavating France's imperial past, a significant part of Paris' not-for-profit (associatif) sector is engaged in campaigning against (institutional) racism itself often underpinned by the anti-clericalism of a certain form of Republican secularism.

The generalized politics of Austerity and the rise of European nationalisms are the discursive scenario upon which this research is being developed while the cityscape, the Paris of the periphery (inside and outside the central 20 arrondissements known as Paris intra-muros), is the physical and spatial backdrop. A striking example of the articulation between these different factors is represented and enacted in everyday life to the north of Gare du Nord, the train station that connects Paris to London. The area referred to as La Goutte d'Or (The Golden Droplet, after the eponymous street) offers a micro level snapshot of the tensions between majority and minority in terms of urban design and the politicisation of religion as well as cheek-by-jowl minority coexistence and multi-layered inter-community co-operation and tension, a kind of non-standard Third Space beyond the assymetrical power relations embedded into conceptions of time and space. While the local authority is going to great lengths to implement a process of neighbourhood (quartier) gentrification – witness the champagne bar recently constructed precisely where young men used to sell bootleg cigarettes in Arabic – the habitus of this historical area of high ethno-religious diversity and dense immigration (first intra-metropole then inter colony-metropole) remains largely unchanged. 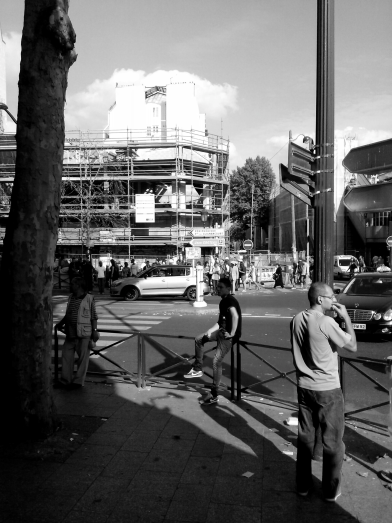 The normalcy of Parisian pluralism is interwoven into a variety of sites in La Goutte d'Or. For example, the 19th century church, the progressive clergy of which have consistently battled against state mistreatment of undocumented migrants (les sans papiers), allowed many people from sub-Saharan Africa to sleep in the church, so as not to be deported. By contrast, the square in front of the church was the intended site of a far-right group demonstration against the threat posed by migrants and Islamic culture to French values: their aborted apéritif of red wine and sausage (saucisson et pinard) apparently symbolizing 'real' French culture. 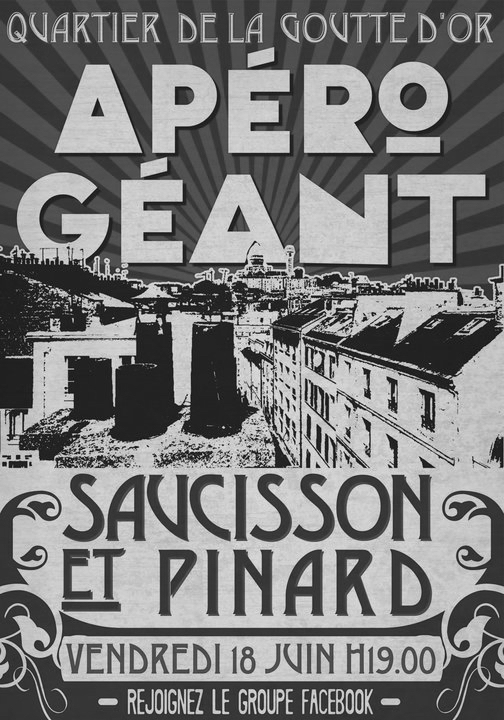 Southwards, down the street, a Sudanese settlement, exasperated by Sangatte has taken root in a tent city between the Gare du Nord and La Goutte d'Or. Northwards, just up the street, Paris' first Institute of Islamic Cultures (ICI) features exhibitions by prominent Muslim artists and doubles as a Mosque, during Ramadan and on Fridays in particular. The highly complex legal status of the organizations that manage the site is testimony to the difficulties of combining the words Islam and Culture in France. 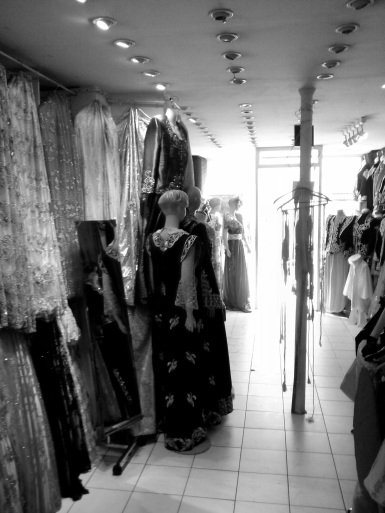 Deeper still into the neighbourhood, a network of textiles shops selling dresses and fabrics communicate a kind of commercial leitmotif for postcolonial Northern Jewish-Muslim and now (similarly diverse) sub-Saharan African immigration to Paris. Together these stores constitute a complex inter-woven zone of cross-community solidarity and competition. Godefroy Khiyat, a Moroccan Jewish entrepreneur who arrived in France in the late 70s, runs a textiles store that sells traditional Maghrebi Muslim garb for the most symbolic community and family events: circumcision and marriage. Betwixt hidden and public transcript, the relations that his store, and the many similar ones in the vicinity, fosters, weld together the Moroccan state discourse of interfaith Maghrebi unity while simultaneously underlining the transformations that these relations have undergone in France. For example, in discussing his best trade practices Godefroy swears by the North African notion of Kalima (word). When he asks his majority Muslim North African clientele 'ndik kalima? (do you have a word? i.e. is your word true?) he is utilizing an ages old formula, a personal oath as it were, for credit and exchange. This is a kind of Trust that his children, who grew up in the Paris region, no longer identify with.

This article is written by Dr Sami Everett who is Junior Research Fellow at the Woolf Institute, working with Dr Shana Cohen and Dr Ed Kessler on a major ethnographic research project examining interfaith cooperation in relation to the concept of Trust across Berlin, Paris, Rome and London. Sami is responsible for the fieldwork in Paris. Read about the project here. Two further blog posts will appear in August and September – Sami will discuss his "work in progress": one on minorities and the police/army and what becomes of identifying with French citizenship and the other on economic exclusion and alienation.