Imagine having to explain to someone that the Holocaust happened. For Richard Evans this conversation lasted for over 28 days when he was cross-examined by holocaust denier David Irving in the Irving vs Penguin Books and Lipstadt trial. Denial, a feature film about the case, was released in the UK on Holocaust Memorial Day: the same day that Trump made a statement on the Holocaust which made no mention of its Jewish victims. In our age of 'alternative-facts' the timing of a premiere has rarely been so appropriate. "I am glad that the film is coming out now" Evans said "because it is about the truth and how to defend it".

The trial began in 1996, when Irving sued American historian Deborah Lipstadt for her portrayal of him as a "dangerous spokesperson" for Holocaust denial. This was despite his publicly reported comments that the Nazi regime did not systematically order the murder of millions of Jews and that there were no gas chambers at Auschwitz. It has been suggested that Irving had seen the trial as his chance to debate the Holocaust with a Jewish professor before the world's media. It is known that he had previously fixated on Lipstadt as a target: gate-crashing a lecture and waving $1,000 in the air, ostensibly to give to anyone who could produce written evidence that Hitler ordered the final solution.

Tactically, Lipstadt's lawyers out-manoeuvred Irving: Lipstadt did not give evidence, nor did any Holocaust survivor. To do so would have suggested that they felt the need to prove the Holocaust’s existence. Instead Richard Evans was called in as an expert witness. Was David Irving a bad historian or a liar? Evans explained how one of their key tasks was demonstrating that Irving's distortion of historical evidence was intentional rather than mistaken. Proving this was arduous but conclusive: Evans and his research assistants submitted a 740 page report demonstrating that Irving had systematically falsified historical evidence, including the use of forged documents, selectively cited sources and a mistranslation of historical records. It was demonstrated that where 'errors' occurred, they consistently implicated the Allies and the Jews, and consistently exonerated the Nazi regime. Lipstadt was correct: Irving had distorted evidence to deny the truth of the Holocaust.

The report was only part of the process however. Evans was then cross-examined by David Irving. It was, Evans once said, a bit like having a tutorial with "a dim student who didn't listen. If he didn't get the answer he wanted, he just repeated the question". With dogged professionalism Evans demonstrated  in the witness box how Irving had misstated evidence, misquoted sources, falsified statistics, changed dates and mistranslated documents to support his views; the Judge later ruled that  in the course of his prolonged cross-examination, "Evans justified each and every one of the criticisms on which the Defendants [had] chosen to rely."

I asked Evans what he thought of The Times comment on the verdict:  "History has had its day in court and it was a crushing victory", he pauses and then smiles: "Yeah, it was!". The victory of Lipstadt and Penguin was a victory for history in two senses: it vindicated historical truth – the events that actually happened— but it also vindicated history as a methodology. As outlined in his book In Defence of History Evans had effectively demonstrated the dangers of postmodernist hyper-relativism: "If history is really nothing more than propaganda… [and] if we don’t believe it's possible to distinguish between truth and falsehood, then we have no means of exposing racism, antisemitism, and neo-fascism as doctrines of hate built on an edifice of lies, indeed we have no real means of discrediting them at all." 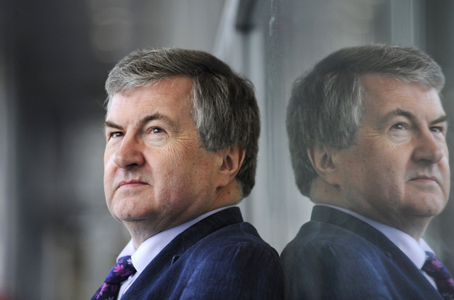 Did Evans think there was any connection between the relativism of postmodernism and our current 'post-truth' context? "Yes, without doubt… Trump's key advisors (Steve Bannon and Kellyanne Conway) were at college when postmodernism was at its zenith and I'm sure it influenced them".  The spat over numbers at Trump's inauguration was, he said, "very concerning. People no longer care about whether what they say is true or not. We can only presume the team know that what they are saying is false. It's just that they don't admit that. If politicians have no regard for truth, how can they frame their policies in a meaningful way?"

On the whole, Evans remains hopeful. This, he admits, is the only point of contention between Deborah Lipstadt and himself. Lipstadt is concerned that as the current generation of survivors passes away holocaust denial will become more prevalent; by contrast, Evans does not believe that this is inevitable. Evans has great faith in the ability of historians to reveal the past. Writing after the trial he stated: "What the Irving trial showed in the end was the ability of historians to come to reasoned and persuasive conclusions about the past on the basis of a fair-minded and objective examination of the evidence. It didn't show that the evidence in question was totally flawless, but it did show that attempts to discredit it rested on demonstrable forgery and falsification. If there is such a thing as historical untruth, there must also be such a thing as historical truth".

Evans is an optimist and as such, he maintains that the danger lies in overstating the significance of Holocaust Denial: "What you have to understand is, that there are more people in the United States who currently believe that Elvis is still living than who believe that the Holocaust didn’t happen". I feel less reassured than I would like to be: "But what about holocaust denial in the Middle East?"  Evans remains upbeat: "It is a different context. For the Neo-Nazis Holocaust Denial is the central tenet of their belief, for Islamists it is simply one ideological weapon amongst many in their intended aim of discrediting Israel". I asked him how best to respond to 'everyday' holocaust denial or the holocaust minimisation that can be encountered on social media (e.g. the facebook and twitter response to Sadiq Khan's live streaming of the London Holocaust Commemoration). Evans response was simple: "respond with the evidence".

Since this interview, Donald Trump made a statement for Holocaust Memorial Day in which he made no reference to the Jewish victims of the Holocaust. Some observed that this was intentional: the extreme right in America often claim that Holocaust commemoration amounts to 'special pleading' by the Jewish community. Closer to home, leaflets have been found on a Cambridge campus stating that the Holocaust did not happen.

Holocaust deniers and Holocaust minimisers may be a minority, but when they have the ear of the President, and a presence in a university like Cambridge, the world needs to respond. Certain facts need to be repeated to be understood: the Holocaust happened. Millions of 'Slavs', 'Gypsies', homosexuals and others were murdered by the Nazis because they stood in the way of their plans. But only the Jews were singled out as an existential threat to Germany, to be killed without exception, wherever they were found. That is why the Holocaust was such an exceptional event in the grim annals of genocide. The world needs to understand this to ensure that it can never happen again. In this respect, as in so many others, there is no room for "alternative facts".

Talking to Richard Evans was comforting – he has faith in a future where truths are still truths, lies are lies, and scholars have both the wisdom and the courage to tell the difference. For this hope to be a reality, however, we will all have to become more willing to articulate what we believe in – what we thought was obvious is not obvious anymore – it needs to be defended.

Alice Sandham is Social Media and Project Officer at the Woolf Institute.

You can read a full interview with Richard Evans appears in this month's BBC History Magazine.