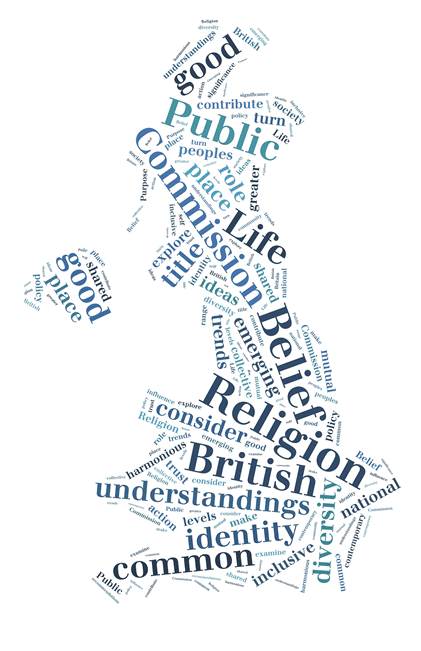 On the 26th February, the Commission on Religion and Belief in British Public Life (CORAB) hosted a national youth hearing at the University of Birmingham, bringing together 16-28 year olds from across the country to consider pressing issues about the role of religion and belief in a modern British society.

Roughly 55 people were split up into five different groups and were tasked with thinking through the role of religion and belief in a modern British society, including their responses to the Charlie Hebdo affair and their experience of compulsory religious education, amongst others.

As someone who fits into the age demographic at the event, I commonly hear about the disassociation of my peers from religion. However, at the Commission on Religion and Belief in British Public Life's recent youth hearing we found there was common consensus among participants that religion and belief should continue to play a visible, but equal, role in British life. They do not want to see a secularism that limits diversity or discourages interaction between faith groups; likewise, those who align with secular beliefs should not be considered less important. They, too, deserve to be a part of religious and belief related discussions, especially concerning interfaith.

Amidst the eager conversation, laughs and passionate appeals, I took a moment to pause and look around the room. Each table represented vibrant religious diversity – people of Sikh, Christian, Humanist, Jewish, Muslim, Atheist, Baha'i and other traditions all gathered together, respectfully discussing issues that meant so much to each of them. It was encouraging sight that inspires our work.

At the end of the day, we hosted a plenary session and groups were encouraged to summarise their discussions to the group. At the very beginning of their presentation, one group simply stated "Don’t let anyone say religion should be off the agenda". That is why this commission is here.

To find out more about who we are and what we do, visit our website at www.corab.org.uk. If you are interested in engaging with the commission and our topics, please email either Austin Tiffany at art50@cam.ac.uk or Mohammed Aziz at maa74@cam.ac.uk.

I would like to extend a special thank you to all our participants, including Alison Young of King Edward VI High School in Birmingham. We are also deeply grateful for our hosts, the University of Birmingham, the Department of Theology and Religion and local faculty member and Commissioner Dr Jagbir Jhutti-Johal for organising the event.

This blog is by Austin Tiffany, a member of the Woolf Institute team, CORAB secretariat and graduate student at the University of Cambridge.