Children's Spirituality and the 99 Names of God

What if teachers of RE had resources that viewed religions holistically and used holistic methods to explore them? Resources, for example, that nurture reason alongside an intuitive knowledge of the heart, critical thinking alongside creative imagination, ecological awareness alongside self-reflection? And what if these resources, rather than creating an "us and them" mentality, actually helped children to better appreciate the diversity of the pluralistic societies we live in today, not just cultivating tolerance of other faiths, but even genuine respect? It is the aim of Chickpea Press to develop such resources, and our flagship title, The 99 Names of God, is an attempt to apply this vision within the context of Islam.

Islam might be defined as a holistic path towards human completion. Its aim is to make us more fully human, to awaken all our latent human faculties within an energy field of love. According to Islamic understanding, the heart of the human being is the only thing in creation capable of reflecting all the Divine Qualities, often encapsulated for Muslims by the 99 Names. Ninety-nine, of course, is a symbol for infinity (there is always the possibility of adding one more), and it is understood that God's qualities are actually infinite. Nevertheless, the 99 Names have a sense of completeness and inclusiveness that human beings can attempt to emulate.

In introducing children to these Qualities, the book is constantly inviting them to see parallels with other faiths, emphasising the spirit of inclusivity found within the Quran and also within the example of Muhammad and the sages of Islam. In the context of the Name as-Salam, the Source of Peace, the book notes that the Quran is clear in stating that Jews, Christians, and people of other faiths are very capable of righteous action and virtuous character, and moreover will be rewarded in heaven for these qualities:

Verily, those who have attained to faith, as well as those who follow the Jewish faith, and the Christians, and the Sabians – all who believe in God and the Last Day and do righteous deeds – shall have their reward with their Sustainer; and no fear need they have, and neither shall they grieve. [Quran 2:62]

In the context of the Name al-Hasib, the Reckoner (a Name which invites us to an inner self-reckoning), we offer this fascinating anecdote from Shams of Tabriz (the mentor of Rumi): 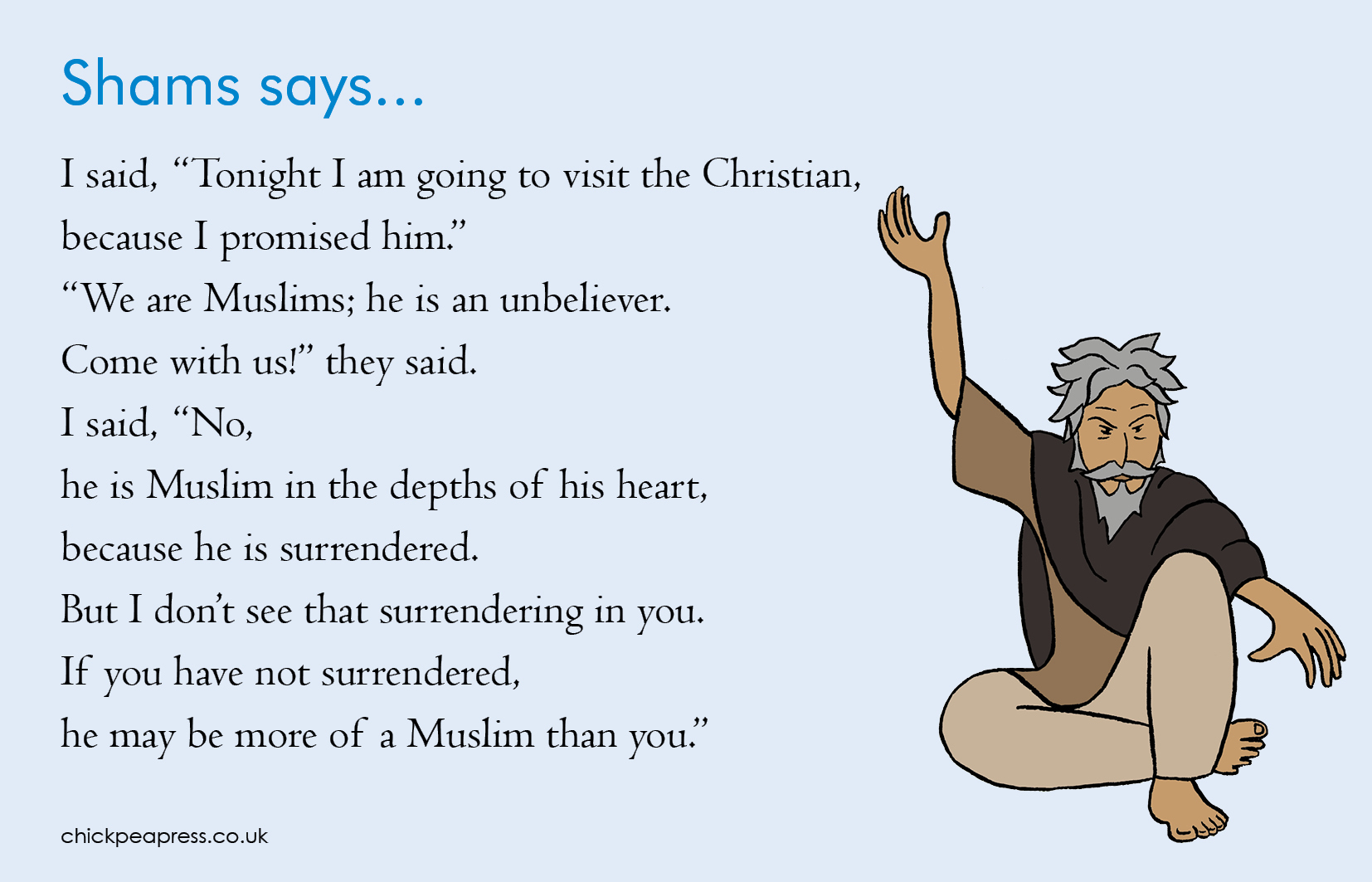 This leads us to explore some important questions: What does it really means to be a Muslim? Can there be "Muslims" (capital "M") and muslims (small "m")? What is Islam's relationship with other faiths? We examine the often misunderstood Quranic verse "The only true religion in the sight of God is self-surrender [islam]". We note that the "islam" mentioned here is not the religion per se, but the state of being after which the religion is named, a state of being which people of all faiths (or none) might experience. From al-Hasib, the Reckoner, comes the Islamic spiritual practice of muhasabah, self-reckoning (they share the same linguistic root), and it is understood that our "reckoning" or "judgement", at the very least, should be directed at ourselves rather than others.

The book includes wisdom from figures relevant to other faiths. Quotations from Abraham, Hagar, David, Mary and Jesus will resonate with Jews and Christians, whilst wisdom from the saintly poet of the Punjab, Baba Farid, is acknowledged as appearing in the Sikh holy book, the Guru Granth Sahib. In the context of the Divine Name, al-Wahid, the One-in-the-Many, young readers are invited to consider if the various Hindu deities that present different faces of the one supreme God, Brahman, are not in fact analogous to the 99 Names that make up the one God, Allah. 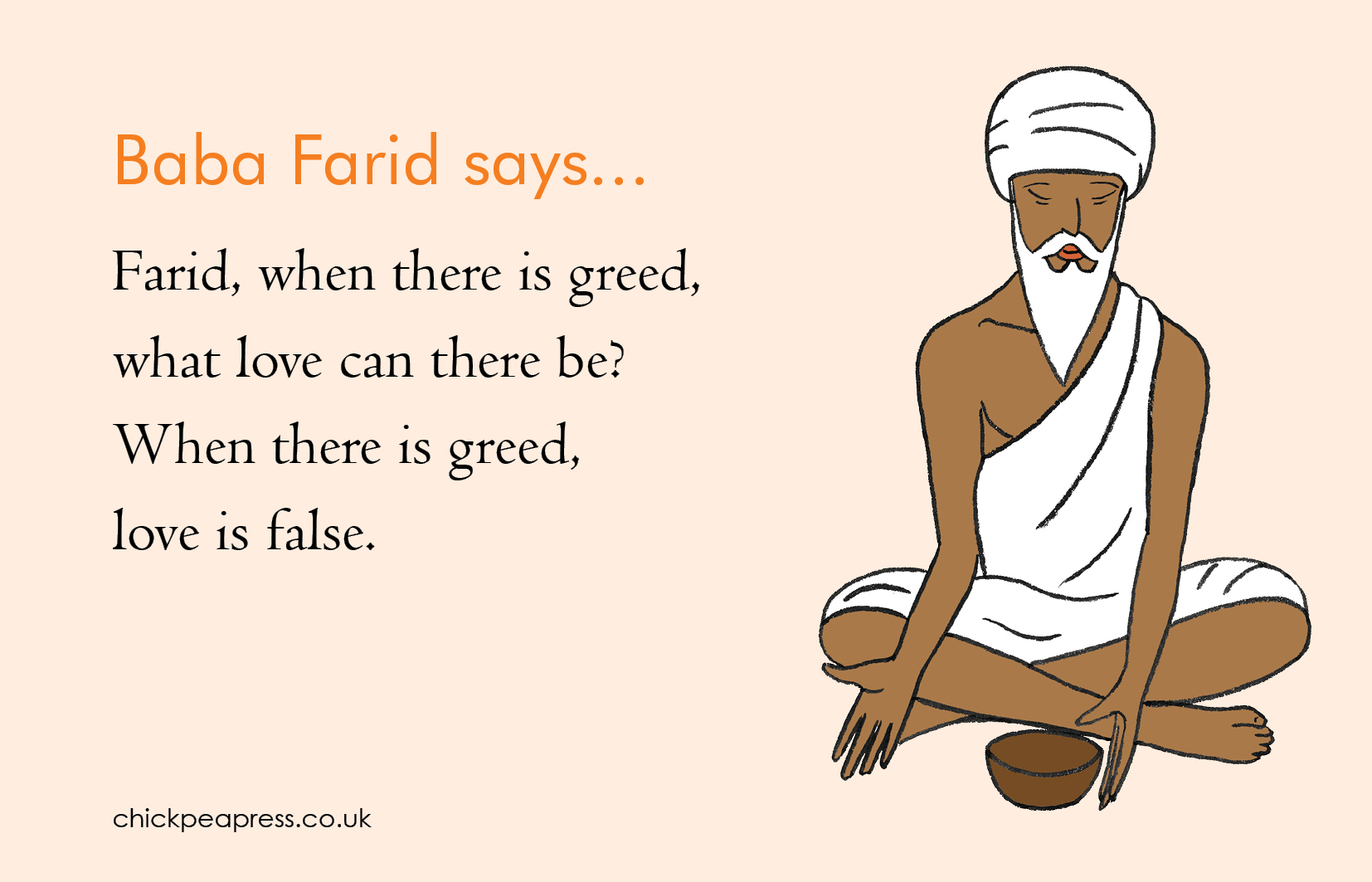 In the "Activities and Reflections" section of each Name, we aim to expand children's cultural and spiritual horizons, and to encourage critical thinking as well as more intuitive modes of knowing. It is our aim to generate curiousity, discussion, and appreciation of mystery and nuance. Wisdom from a diverse range of influential non-Muslims is referenced, from Buddha to Black Elk, from Lal Ded to Emily Bronte, from Shakespeare to Frederick Douglass.

We have had an excellent response to the resource, not only from Muslims but also non-Muslims. We hope that we can produce many more like it, and that we can be part of an inter-spiritual movement towards greater understanding and love.

Daniel Thomas Dyer is the author and illustrator of The 99 Names of God, and co-director of Chickpea Press. A great lover of music and poetry, he was called to Islam through Leonard Cohen’s reference and appreciation of the Sufi poets, which eventually led him to the path of Rumi. He has a wealth of experience working in children's and educational publishing, as well as teaching in the UK and abroad.