As you walk up the stairs to the Woolf Institute offices in Grange Road, one wall is adorned with prints of stained-glass windows that feature in the synagogue of the Hadassah-Hebrew University Medical Centre in Jerusalem. Created by Marc Chagall, the Russian-Jewish painter, each of the 12 windows represents one of the 12 tribes of Israel. I saw these windows when I was five years old. I can still remember that moment of pure joy; as the sunlight shone through, the vibrancy of the colours was incredible. 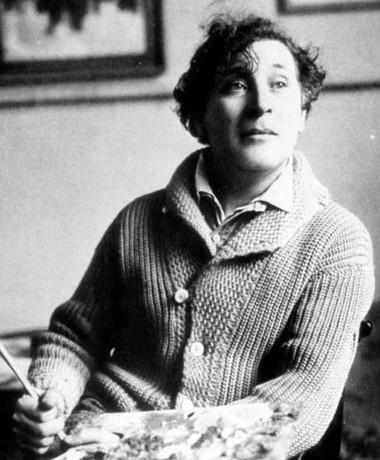 Imagine my delight when a recent trip to Belgium coincided with Chagall: Retrospective, an exhibition of more than 200 of his artworks gathered at the Musées Royaux des Beaux-Arts de Belgique (Royal Museums of Fine Arts of Belgium). The museum, located in Rue de la Régence, Brussels, is just a short distance from both the imposing yet magnificent neo-Romanesque Great Synagogue of Europe (formerly known as the Great Synagogue of Brussels) and Le Musée Juif de Belgique (the Jewish Museum), where just over a year ago, a gunman shot and killed four people.

We (my Mother and I) were more than an hour early (family trait!) with our pre-booked timed-tickets so had a coffee in the Museum Café but over excitement got the better of us; We could wait no longer and asked whether we could visit the exhibition earlier than planned. A smile goes a long way (it may have helped that the request was made in French!) – An hour early and we had arrived; we were standing at the entrance to the exhibition, grinning from ear to ear!

The exhibition, which started in Milan, brought together artworks from more than twenty international institutions including the Tate, MoMA New York, Centre Pompidou and Musée d'Art Moderne de la Ville de Paris to name but a few. These works represent every period of Chagall's life – from his early paintings in Vitebsk, Russia to his later homes of Paris, New York and Nice – and offer a rich overview of his artistic career.

We walked through the exhibition space, each section representing the main themes of his work – First Russian Works and Trip to Paris (1908-1914), Paris (1910-1912), The Return to Russia (1914-1922), The Moscow Jewish Theatre (1919-1920), The new beginning in France (1923-1931), The Fables of La Fontaine (19126-1927), Winds of War (1931-1947), A New Homeland (1948-1985), and Music and Theatre (1943-1966) – and we glided through seamlessly – at times, it seemed to give the impression that we were floating through the air as if we were featuring in one of Chagall's paintings just like Bella, his first wife (who died in 1944) appears. I felt a great affinity and closeness to Bella, having read her book, Burning Lights, in which she portrays her childhood in Vitebsk (the Russian market town where both she and Chagall grew up). Her visualisations of the town were exposed in front of my eyes – Chagall's depictions were beautiful. At that moment, I could hear a Yiddish melody originating from another part of the exhibition; I closed my eyes and was transported back to Vitebsk (or more likely Anatevka, from Fiddler on the Roof, my all-time favourite film!), to a different time, influenced by traditions and cultures long since lost. I was immersed in Chagall’s artistic world.

We continued our journey through Chagall's life. I was struck by one painting in particular, one that I had not seen or heard of before – Angel with Palette (on long-term loan at the Musée Cantini, Marseille). Oil on linen and painted between 1927 and 1936, it is a self-portrait that alludes to the artist’s spiritual side as a potential bearer of a message of peace between nations and religions. The artist then assumes the role of seer, through the revelation of G-d.

A message of peace between nations and religions. What a beautiful, poignant sentiment. I stood there, transfixed to the spot. Not only was I mesmerised by the painting itself but I was enveloped by sadness as I remembered the four victims who were killed just a year ago at the Le Musée Juif de Belgique. Peace between nations and religions. How much we can learn from just one painting. I smiled at the angel, at Chagall. I thanked him for reminding me about the value of life, of peace, of humanity. I continued on with my travels through time.

This article is written by Dr Emma Harris who is Academic Coordinator at the Woolf Institute.