'Fear not' – the first words spoken by the angel heralding the arrival of the new-born Messiah to the shepherds in the fields. 'Fear not' could also be the motto of Bildkorrektur, a group of well-known German designers who have teamed up with the aim of countering resentment against refugees. But instead of entrusting themselves to the power of words, they have created images of the 15 'top fears', and then responded to these by means of contrasting images. Brief captions offer explanations, based on the research of the Berlin-based journalist Felix Denk. 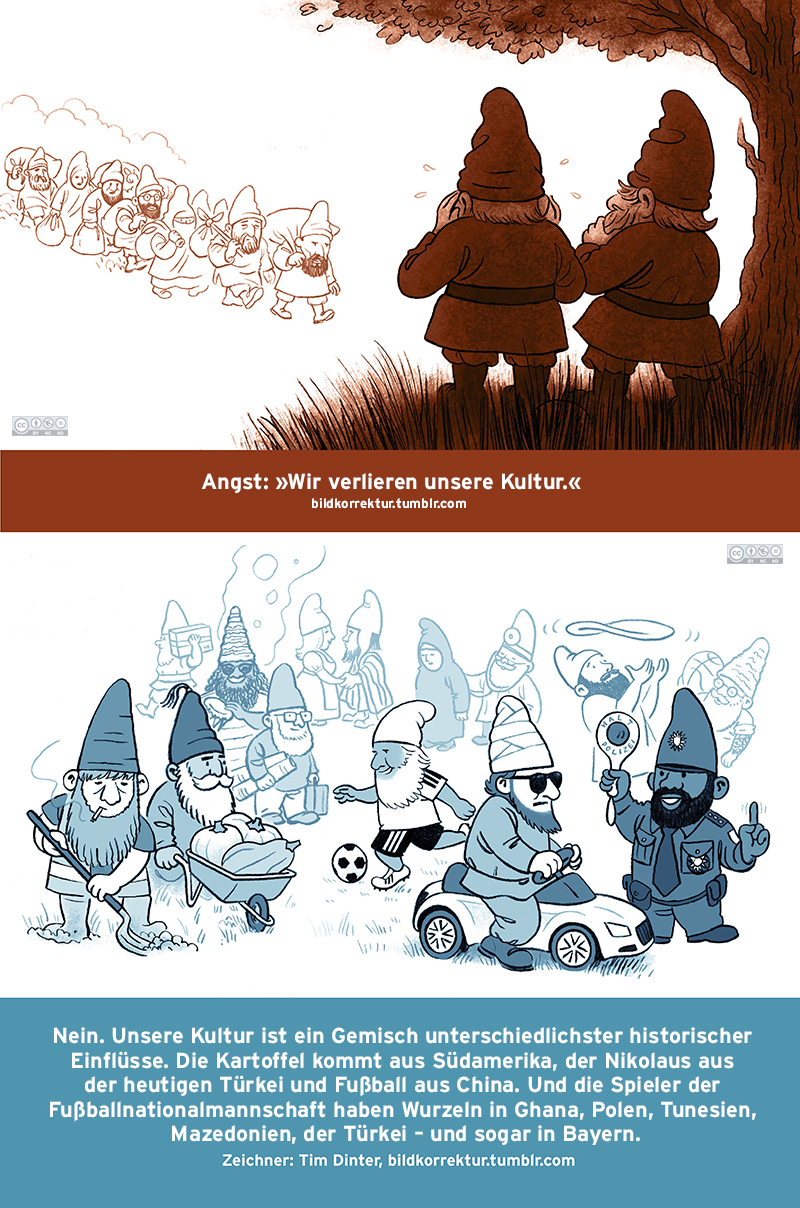 In a clear and associative contrast, each fear is shown in a red cartoon and the alternative perception in blue. Some cartoons address the fear of losing Germany's existing culture, which is countered by explicating this culture's diverse origins. Others deal specifically with prejudice against Islam. A Muslim family is first presented with weaponry ready to be used for terrorist attacks and then in blue as a family with a stay at home dad, the mother as a best-selling author and their child as a future IT genius. 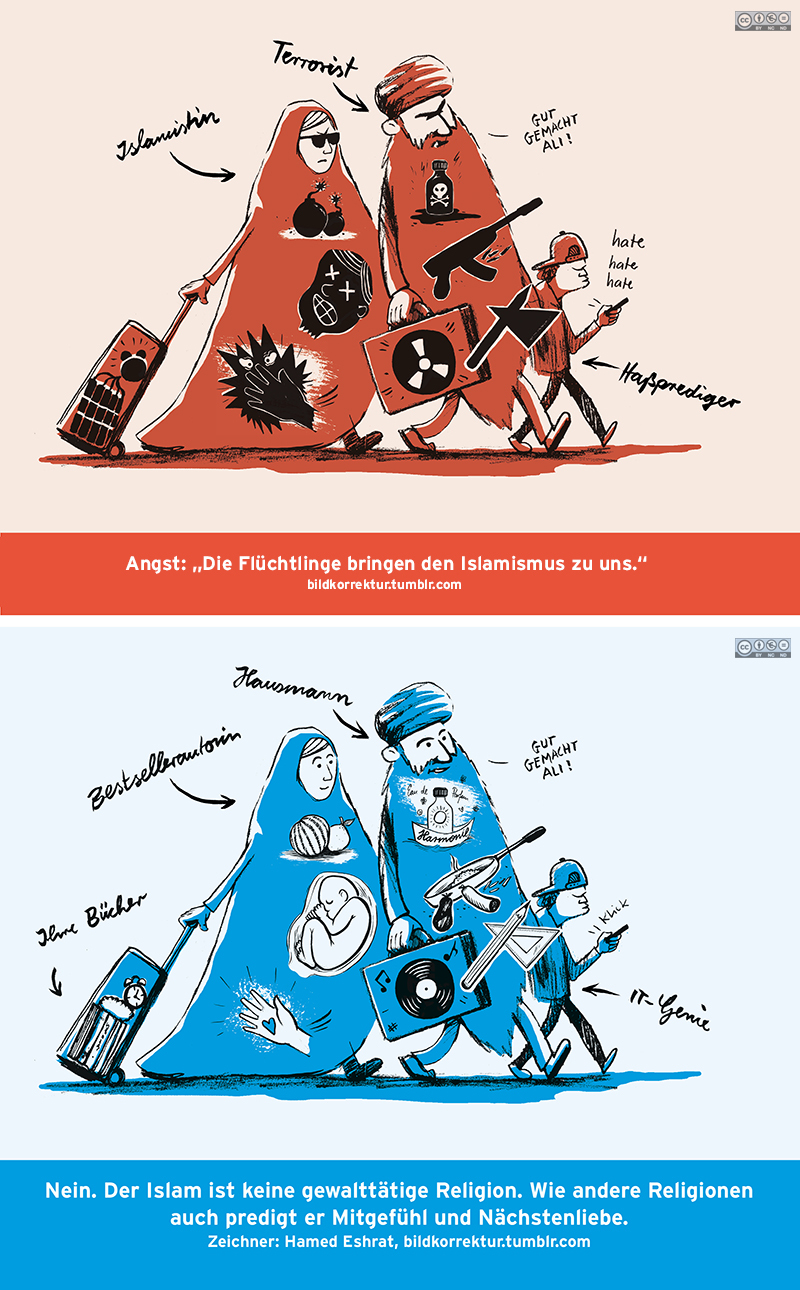 But, one might wonder, is this the right way forward? Although they are responding to often shamelessly simplistic views, are they responding with a similarly simplistic answer? And haven't images caused enough damage with the attacks on caricaturists in Paris and Denmark?

At first glance, these cartoons offer a simplistic statement. But the medium of the image is purposefully chosen. In many ways Bildkorrektur are reclaiming a medium that is more commonly used to provoke, to shock, or to ostracise. And even (un)intentionally shocking as they might be, the cartoons serve the purpose of stimulating a factual consideration of what stands behind the fears; the cartoons are thought-provoking, not a provocation. Are the numbers of refugees coming into the country really unprecedented and therefore an insurmountable challenge? 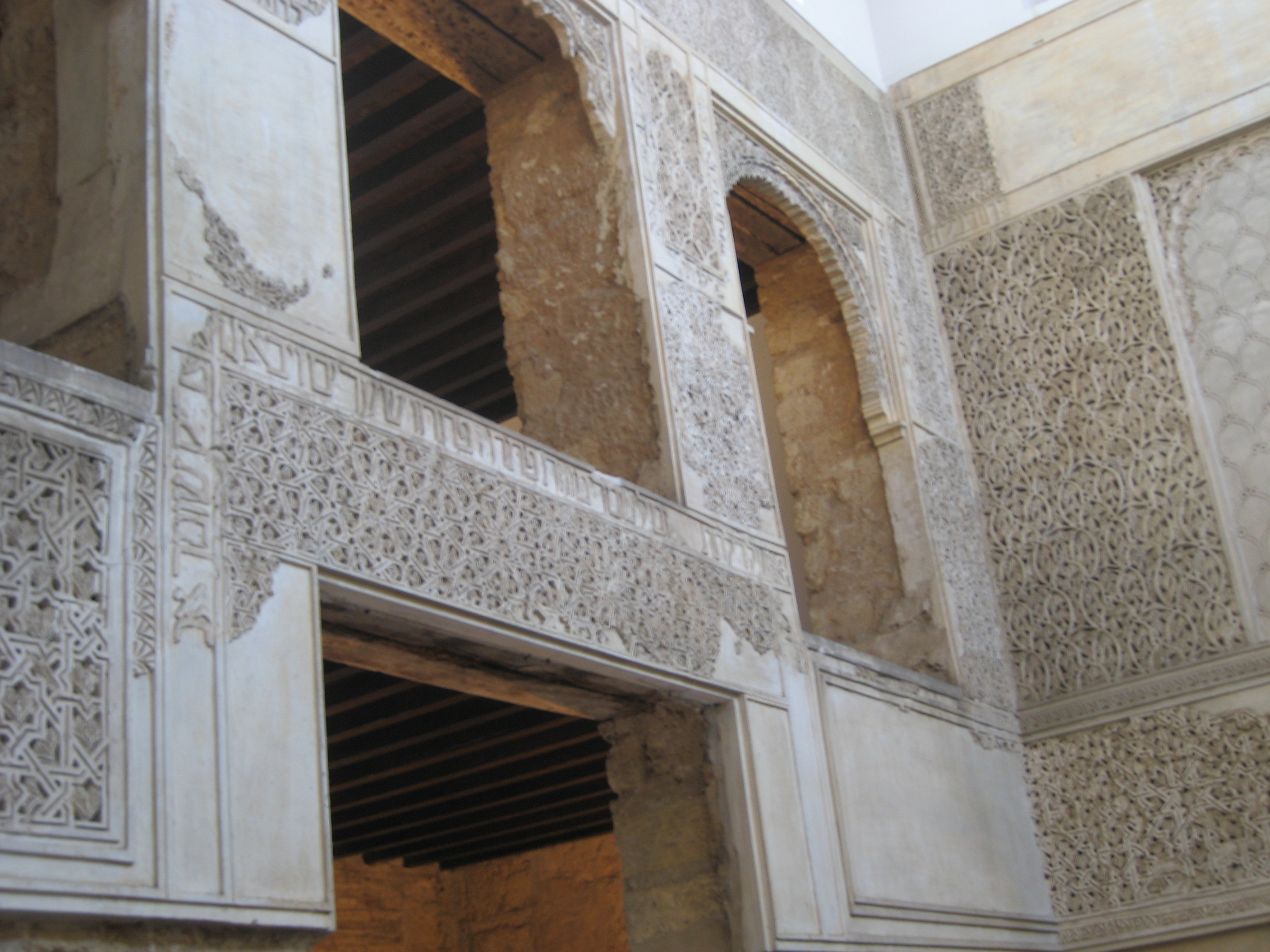 These postcards are effective not only because of the striking images but also because of their simplistic presentation of the facts. So, after all, does it matter that they are simplistic? No. What this project has achieved is the shift away from images as a projection of fears to the cartoon as a medium, reclaimed for the abstract presentation of an unseen reality. The image is a gateway to deeper engagement, to a path less driven by emotions, but by an understanding of another perspective, by knowledge. 'Fear not' – a simple message and one that is powerfully communicated by these cartoons.

Finn would like to extend his gratitude to the Spalding Trust and the Fritz Saxl Trust, both of which most generously support his doctoral studies.