Austerity and Our Social Future 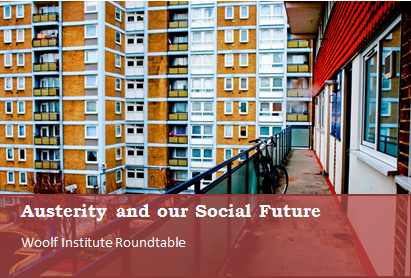 The 2007-8 financial crisis resulted in a drawn-out recession in Europe not seen since the Great Depression. It has provoked governments to implement drastic public sector cuts, building on anti-welfare measures initiated in the late 1990s. In both Germany and England, the experience of dramatic cuts has led to a subsequent rise in poverty and more general economic insecurity, which has corresponded with the expansion of food banks, homeless shelters, credit unions, and other community-based initiatives.

On November 13 2014, the Woolf Institute organised a roundtable day event called Austerity and our Social Future at which representatives from charitable organisations, individuals affected by the cuts, politicians, policy-makers and academics from both countries discussed the role of governments, faith- and community-based welfare organisations and individuals in responding to human vulnerability in an age of austerity. The event was part of the Institute’s comparative European study on community-based responses to austerity in Berlin, London, Paris, and Rome; known as the "Trust Project".

Bringing together practitioners and academics from diverse backgrounds, experiences, and perspectives, the discussions were collaborative and insightful. Participants shared not only the experiences and practices they had in common, but also the ones that differed and challenged each other in an open and collegial manner.

Participants acknowledged the complexity of basic needs and emphasised the importance of empowering vulnerable individuals to take responsibility by helping them to address not only their immediate needs, but also their long-term multi-faceted needs. For example, Sarah Greenwood from the Trussell Trust foodbank recounted the story of a man, who while working for NASA in the United States was involved in a car crash that killed his girlfriend and caused him severe head injuries with long term effects. Due to his condition he lost his job and had to return to the UK where he struggled to access relevant support. He subsequently became homeless but fortunately was directed to Sarah's foodbank where he was given not only food, but also personal continuing assistance to obtain appropriate care and housing.

Speakers also noted the importance of community-based initiatives and the responsibility of every citizen in addressing those needs, but cautioned against accepting the retreat of government in addressing its social responsibilities.

The conversations led to the formation of understanding as well as new practical and theoretical knowledge for both the participants and members of the audience.

The event also assisted in fostering relationships amongst participants. As an example one of the delegates, Julia Ferro, who manages a German homeless care centre, met and took the opportunity to subsequently visit another contributor, Barry Griffiths, at Jimmy's, a homeless shelter he helps to run in Cambridge.

Moving forward, Shana Cohen and I are putting together an edited book with contributions from roundtable participants, providing their perspectives about the role of social action in an age of austerity.

In conclusion, the enthusiasm and networking generated from this roundtable event has acted as a catalyst for continued dialogue between actors in the field of social initiatives. It is hoped to encourage other institutions to organise similar events that bring together people working in different fields and with varying backgrounds as a way of brokering social and professional connections and thereby creating understanding and mobilising change. We will certainly do so in the future!

This blog is by Dr Christina Fuhr, Junior Research Fellow at the Woolf Institute. Christina currently works with Dr Edward Kessler and Dr Shana Cohen on a major ethnographic research project examining trust and interfaith cooperation in Berlin, Paris, Rome and London. Christina has recently completed her doctorate on Jewish identity construction and perpetuation in contemporary Britain at the University of Oxford.