A Day Trip to Paris

A Day Trip to Paris

Muslim-Jewish relations in France are the focus of a seminar which academics from the Woolf Institute teach within the MPhil in Muslim-Jewish Relations at the University of Cambridge. The Paris attacks at the beginning of January 2015 gave this part of the module additional urgency and importance, so we decided that teachers and students would go on an excursion to Paris, to visit places of worship, cultural centres and parts of town associated with strong Jewish and Muslim communities. We were also to benefit from the fact that a Woolf Institute Research Fellow, Dr Samuel Everett (Sami), was in Paris in April and May on field work and would be able to share his knowledge and research with us.

To make it a worthwhile day trip, we set out in the middle of the night, at 3 A.M. on Tuesday, May 5th. Getting up a long way before dawn enabled us to begin the day at the foot of the Sacré Cœur basilica on top of the hill of Montmartre, where Sami laid out our plans for the day while we enjoyed views over Paris, despite the drizzle and occasional heavy rain shower. 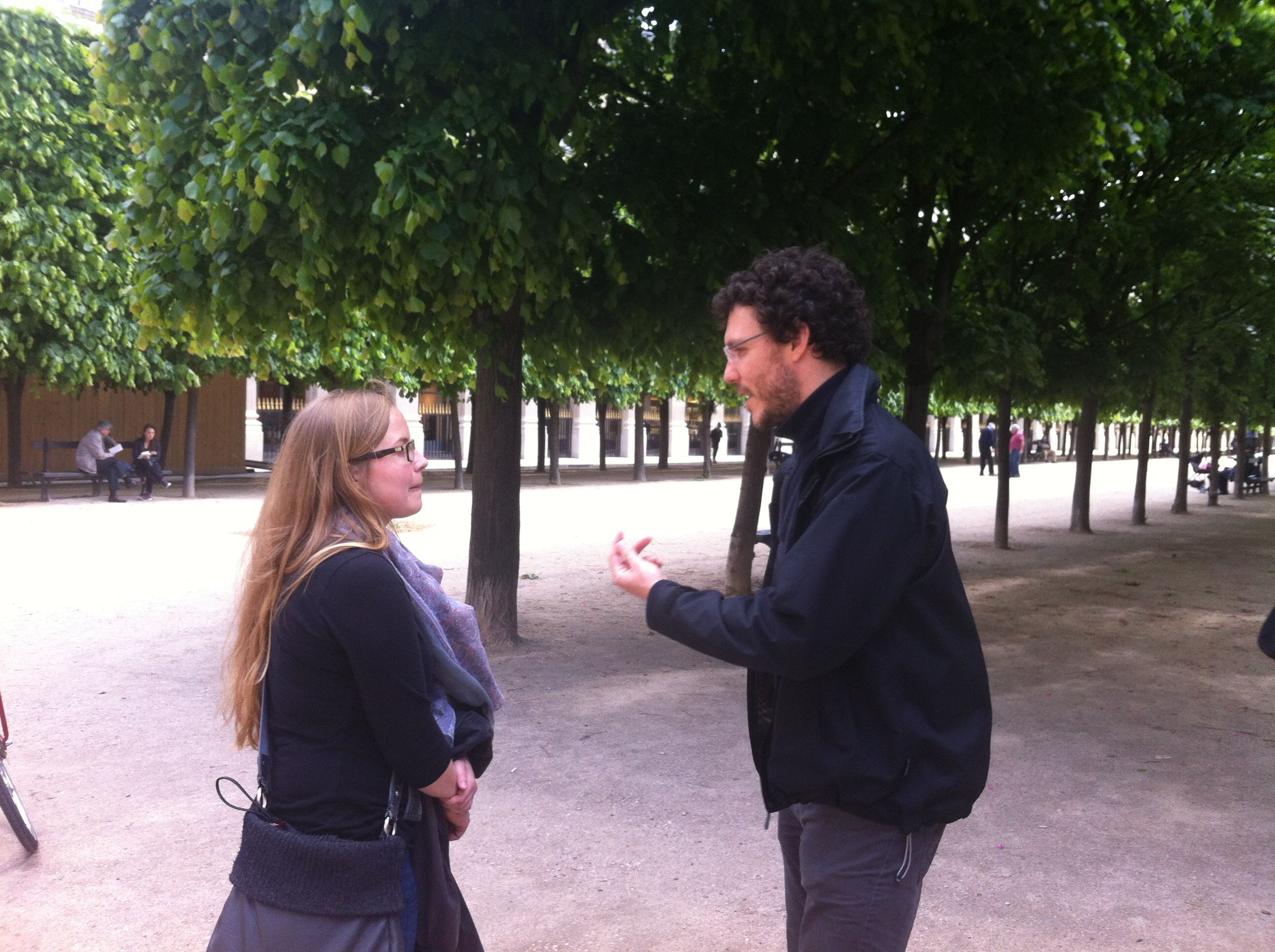 From Montmartre, we left to explore the area around the Gare du Nord and the mercantile Goutte d'Or, where Muslim and Jewish immigrants from North Africa originally settled next to each other, following similar professions, such as selling traditional garments and fabric, and more recently mobile phones and appliances. According to Sami, many of the Jewish stores have closed and moved on to other parts of the town, but some still remain. This led us to discuss how people nowadays perceive the safety of particular neighbourhoods, in particular for Jewish visitors. Patrols armed with assault rifles stationed at Jewish and Muslim public buildings since the January attacks might certainly convey a picture of precarious relations between the different faith communities, but our mixed troupe of more or less visually recognisable Muslim/Jewish/Christian/Atheist members had no bad experiences, but rather the opposite. 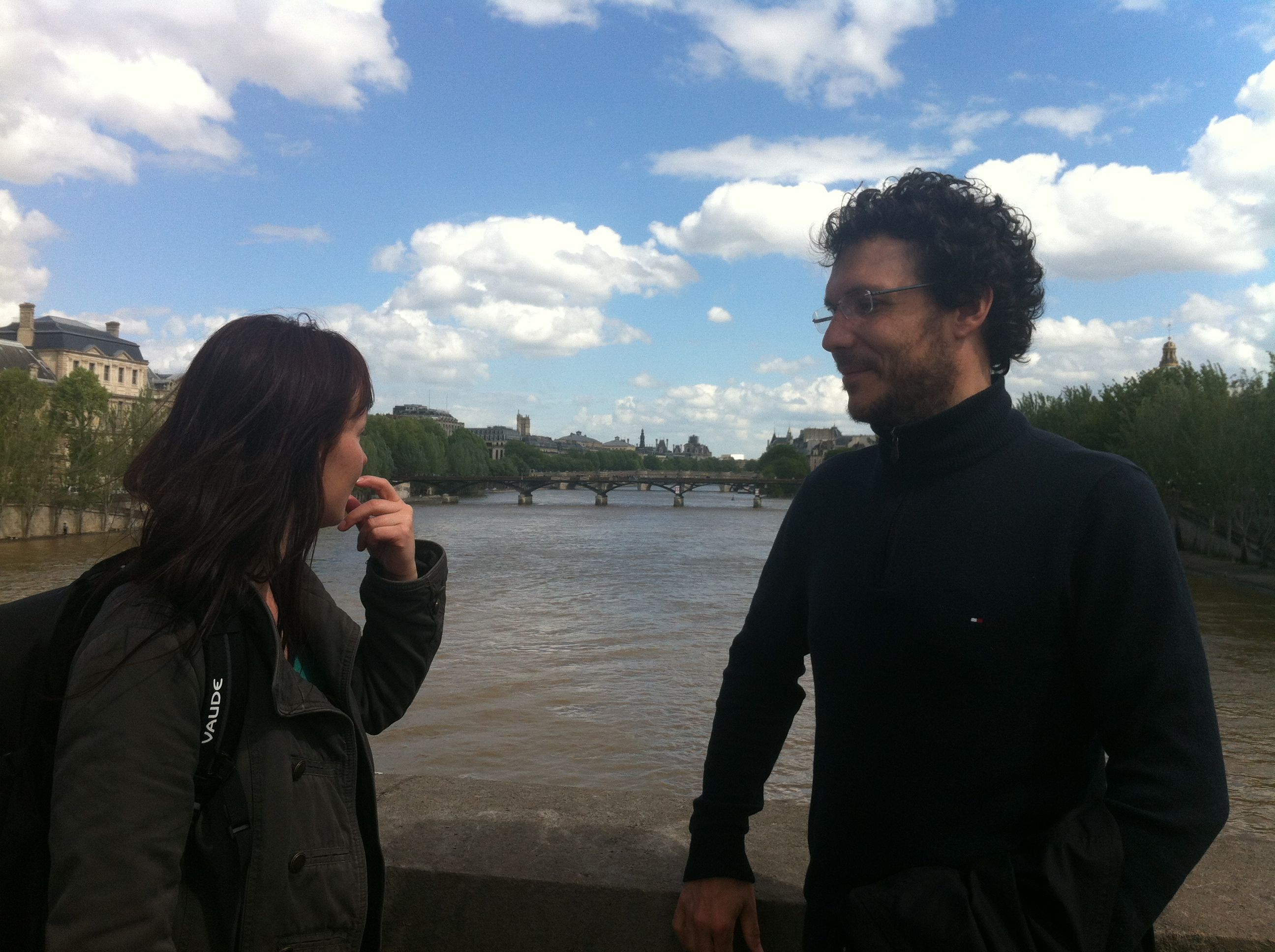 We walked on through the 18th arrondissement, marvelling at clusters of shops that specialise in North African wedding outfits or that sell fresh mint exclusively and nothing else. Next on the agenda was a visit to the Institut des Cultures d'Islam in Rue Stephenson, which featured an exhibition by various Muslim artists of photo-collages juxtaposing Western ideas of the Orient and symbols of current conflicts, which were particularly memorable and striking. Another exhibition focused on Gaza, and positioned people doing all sorts of everyday activities, such as knitting, watching television and hanging up washing, among war-torn landscapes, bombed houses and temporary shelters.

The exhibitions were impressive but some of us found the exclusive focus on war themes difficult. When discussing the 'appropriateness' of placing an exhibit on the Gaza Strip in the Islamic Culture Institute, we explored the questionable binary of secularism and faith and raised questions concerning the fine line between recognizing the significance of Palestine to Muslims and conflating the Palestinian conflict with Islam. We would perhaps like to learn about Islam in other regards than that constantly portrayed by the media. Much appreciated by the group was the adjacent Hammam, whose friendly staff allowed us to have a look around, and it was very hard to resist a visit in their relaxing facilities.

From there we visited the Grande Synagogue in Rue la Victoire, its beautiful façade terraced into an ordinary street. In large letters, across the entire front, there is a Biblical citation of Isaiah 56:7 in Hebrew which states 'for my house will be called a house of prayer for all peoples'. Unfortunately, there is no translation into French.

Next was lunch in a kosher restaurant, where we tried the delights of the Tunisian specialty 'couscous with fish'. The Jewish-Tunisian owner obviously warmed to the students and was very happy to converse with them in Arabic and in Hebrew. 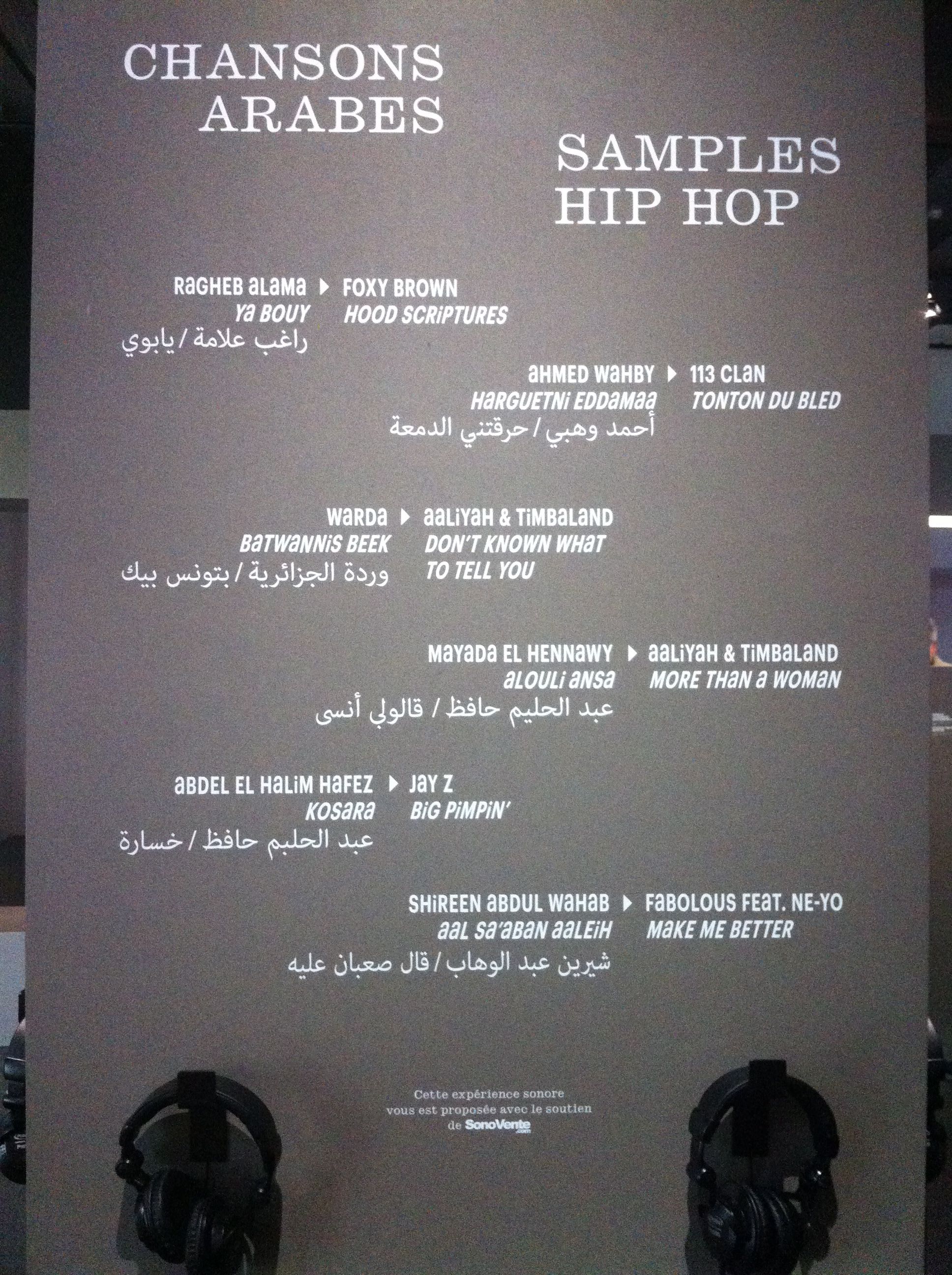 We continued our walk through Paris, now thankfully in the sunshine, followed the Seine to a quick break at Notre Dame and walked through the buzzing tourism around the Musée du Louvre. Our next stop was the Institut du Monde Arabe, where we admired an exhibition of Arab Hip Hop Culture. This temporary display provided an exciting mix of music and video clips, posters and clothes, and so provided a very interesting glimpse into how American Culture influenced Youth in the Middle East, and how the Middle East in return influenced American Hip Hop. Different styles of music developing around the Middle East and North Africa showcased how Hip Hop is a borderless phenomenon. Artists with root in countries such as Saudi-Arabia, Lebanon, Israel/Palestine and Syria explained how Hip Hop had always been an urban phenomenon and 'street art', so where better to perform it than in the oldest towns and oldest streets of the world, in the Levant and Syria. 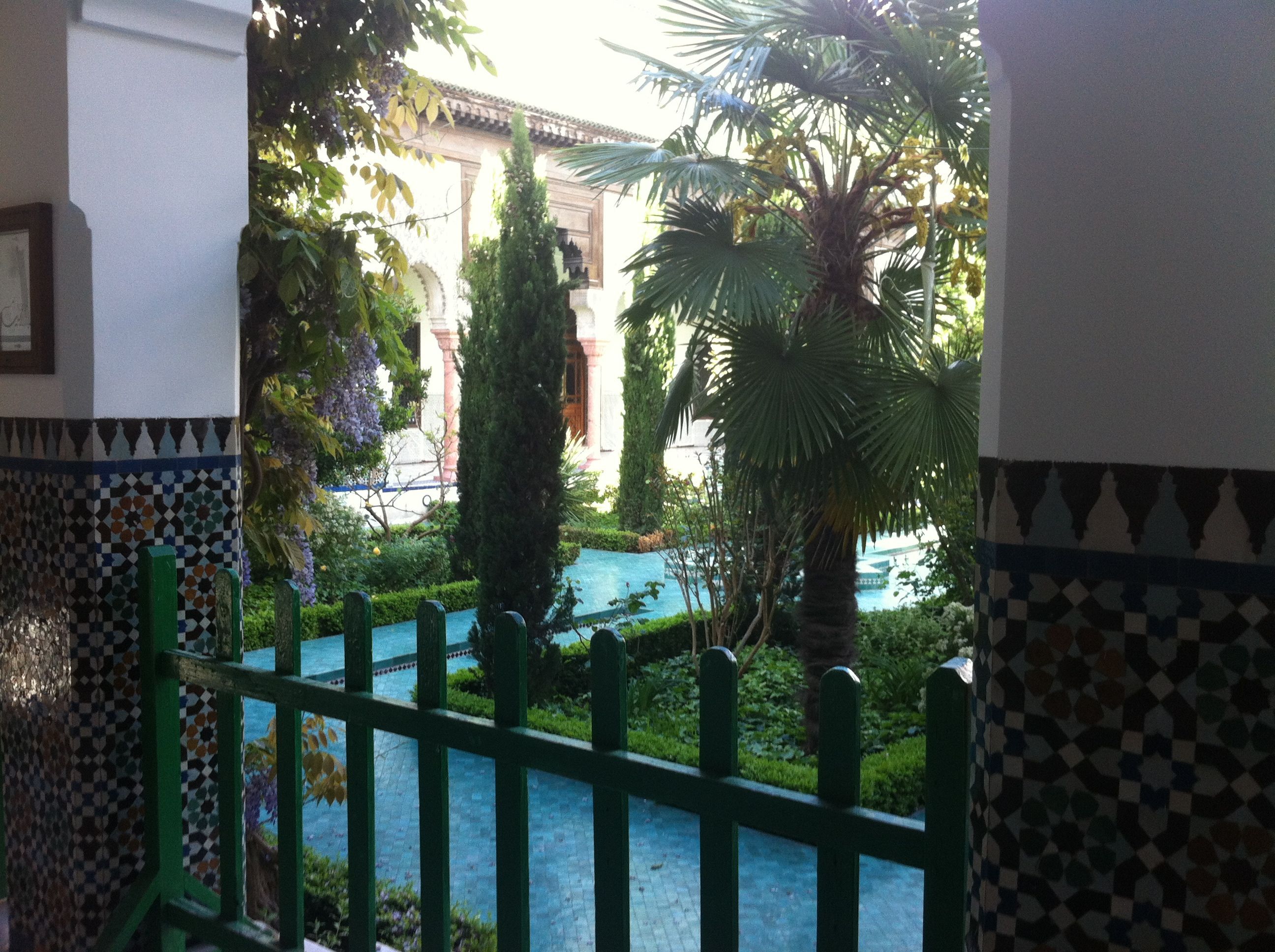 The next stop on our tour was the Grande Mosque de Paris, which felt like an island of Middle Eastern landscape inside Paris. The complex was extremely beautiful and surprised us with a calm and serene courtyard, shutting out the noise and turmoil of the city. It was fascinating to hear how similar the sounds of prayer in the mosque were to prayers in some Mizrahi synagogues. The similarity between the two cultures had been a theme throughout the day. On various occasions, the students discussed whether the person they had just encounter was Muslim or Jewish.

The trip led to a number of stimulating conversations that were particularly relevant to our most recent 'Special Topics' paper. Yet we also learned a lot about each other, and about each other's subtle details in religious practise. When looking for a place to pray for Elisheva within the mosque, for example, we realised that she could not go inside the prayer room as she needs to keep her shoes on during prayer whereas shoes need to be taken off inside mosque prayer rooms.

Spending the day discussing questions with no certain answers in a field with undefined theories could have been slightly overwhelming, but with each other's very enjoyable company and the help of Muslim teas and Jewish foods we overcame adversities, such as adverse weather, sprained ankles and severe muscle pain.

We ended our long, but very informative trip with a visit of Le Marais, which is often called 'the Jewish quarter', where pastries and ice-cream from a kosher bakery provided an excellent dinner while we made our way back to the station, and left us feeling overjoyed and slightly euphoric at the end of the day!