A Day at the British Museum

A Day at the British Museum

Reflections on the British Museum exhibition, 'Egypt: Faith after the Pharaohs'

As part of the Muslim-Jewish Relations MPhil programme at the University of Cambridge and for the student members of the Woolf Research Group, the Woolf Institute likes to organise excursions. Since Dr Esther-Miriam Wagner, who teaches part for the MPhil course, was involved in writing the catalogue for the exhibition 'Egypt: Faith after the Pharaohs', currently on display at the British Museum, the British Museum most graciously offered us free entry for our students. So a mixed group of MPhil and PhD students, from Iranian, Moroccan, Egyptian, American, German, Korean, English, Spanish and New Zealand backgrounds and working in various academic disciplines, set off on 17th November to travel to London.

The exhibition presents 1,200 years of history of the various faith communities in Egypt, with 200 breath-taking objects on display, giving intimate access to Egyptian life and the mutual cultural influences between believers in Ancient Egyptian religions and Roman Gods, Jews, Christians, and Muslims.

We all had our favourite bits of the exhibition. The vivid colours and well-preserved material of a sock from the 4th century, and beautiful, luminiscent pieces from glass impressed Miriam the most. And she was struck by a quotation which illustrates the familiarity and comfort of 6th-century Christian Egyptians with Greek lore: a Christian writer wishes the blessing of Hera on a newly-wed couple, and asks the groom to carry the bride over the threshold like Europa. Perhaps not unlike one of our Muslim students expressing frustration by saying 'Jesus', as was observed during the trip.

Madeleine found the texts about magic, healing, and astrology the most fascinating aspect of the exhibit. They vividly demonstrate that human nature really doesn't change (for example, one man invoking a spell to make a woman burn with desire for him) but they are also remarkably synchronistic: Muslim and Greek astrologers adhere to the same constellations, or spells call on deities from several traditions.

Images from the 14th century Kitab al-Aqalim by Abu 'l-Qasim al-'Iraqi were especially interesting to Jessica as the illustrations in this medieval alchemical work were very obviously inspired by and/or directly copied from identifiable ancient Egyptian monuments. A portable mihrab (a niche indicating the directions of prayer) from medieval Egypt also fascinated her, as such objects provide insight to how religious needs could be accommodated when people were travelling.

For Mohammad, the exhibition showed, in a way that he had never seen, the story of Egypt shifting from gods to one God and how this shift affected Egypt and more interestingly influenced the monotheistic religions. A country where one group worshipped a variety of gods came was transformed into a land where different groups worshipped one God. Despite their differences, Jews, Christians and Muslims still showed a lot of overlap, as evident in the Genizah objects at display in which the Bible is written in Arabic script and the Quran in Hebrew script.

Amine found the exhibition tremendously compelling. He was amazed by the pieces of Qur'an written in Kufic script that he could not read, and by the various maps made by navigators showing their partial view of the world, which he thought represent a perfect metaphor of the importance of 'humility' and 'doubt' in interfaith dialogue today. Amine also thought that Rodrigo was actually living in the British Museum! Like a Spanish navigator, he knew all the ways around.

As an Egyptian, Mohamed was most impressed by Maimonides' handwriting as this document reminded him that while in Egypt nowadays only a few Jews reside, Jewish people played prominent roles in Egyptian history.

Juni was delighted to see the Codex Sinaiticus displayed at the exhibition and while strolling around she suddenly experienced an epiphany moment - it struck her that her undergraduate and graduate degrees were all somehow related to one other: the history of the Christian church, the study of Coptic manuscripts, Jews in the Hellenistic and Roman period, Septuagint studies and the Muslim merchants in the Genizah all share a common ground, Egyptian sources! With relief she realised that her seemingly haphazard choice of subjects all seemed to make sense, finally.

For this blog, we tried to take some photographs, and fortunately we had a real professional with us in Juni, who showed us that pictures of still standing individuals are not very appealing. 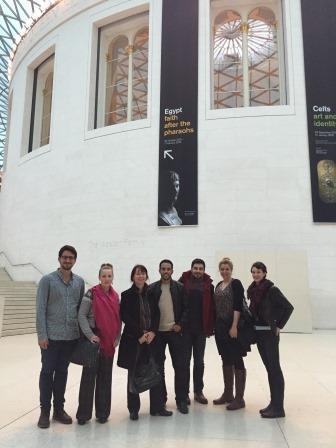 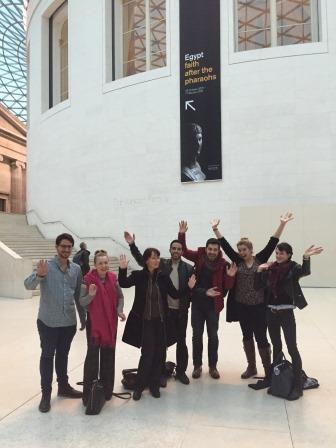 After the British Museum, we went to a lovely Ethiopian restaurant in Kentish town. Student excursions to exhibitions and museum are great bonding experiences, but these positive encounters become even more effective when food consumed together is eaten by hand from the same plate. The different dietary requirements of our party worked out fine, too: vegetarians and meat eaters, drinkers of alcohol and tee-totals, people who drink coffee and those who don't, all managing to sit together without previous deliberation. Yet, as in society, rivalry between the different ends of the tables quickly ensued, resulting in speed-eating competitions and analyses of group dynamics and personalities from the amount of food left on plates after the meal, perhaps inspired by Egyptian magic and divination practices. 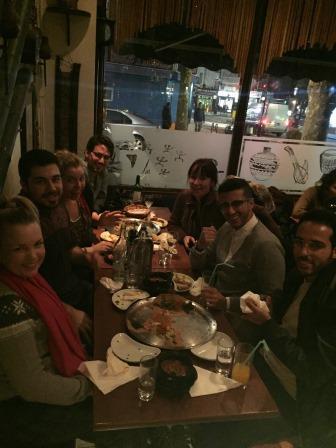 At the Queen of Sheba with delicious Ethiopian food 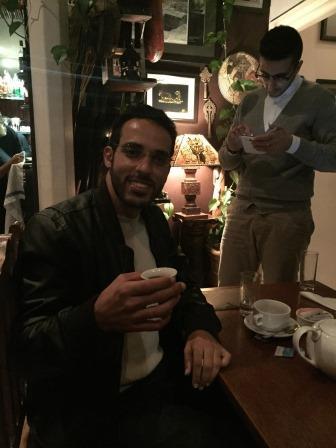 Amine with his first coffee since 2007

Despite extremely high winds, we had a smooth train ride back to Cambridge, where we hurried home to prepare for another day of academic study of Muslim-Jewish-Christian relations.

The 'Egypt: Faith after the Pharaohs' exhibition is still running until 7th February 2016. We would like to thank the British Museum for allowing us free entry, and the Queen of Sheba for hosting us.
http://www.britishmuseum.org/whats_on/exhibitions/faith_after_the_pharaohs.aspx